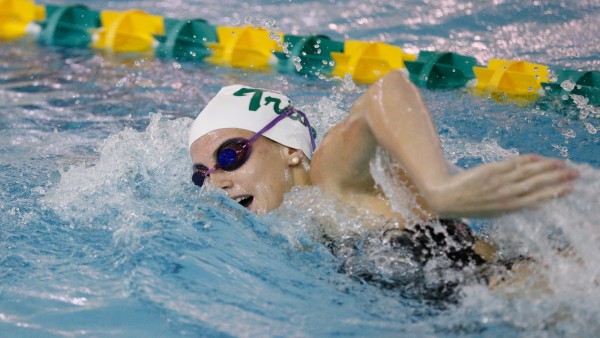 Both the William and Mary men’s and women’s teams turned in strong performances in a tough quad meet against Power 5 opponents over the weekend. At the Virginia Tech Quad meet held at the Christiansburg Aquatic Center, the men beat West Virginia 223-123, while the women topped the Mountaineers 176-164. However, both the men’s and women’s teams were defeated by both Duke and the hosting Hokies, moving the Tribe’s record to 3-2 on the year for men and women.

On the men’s side, senior Joe Eiden made a big statement, beating out everyone in the 100-yard freestyle to win in 45.16 seconds and set the College’s dual-meet record by over 0.3 seconds. Eiden was also a key leg on both the 400-yard medley relay team, which beat WVU, and the 200-yard free relay team, which defeated both the Mountaineers and the Blue Devils.

Freshman Chris Balbo added to his immediate impact on the Tribe team, as he won the 500-yard free in a school record of 4:35.91 and the 1650-yard free in another school record of 16:04.58. Balbo also swam a tremendous 200-yard fly race, beating all WVU competitors to record the 13th-fastest time in school history. Freshman Ben Skopic also had a strong weekend, delivering wins over the Mountaineers in both the 200-yard IM and 200-yard breast, as well as a critical win over both WVU and Duke in the 400-yard IM. At the end of the two-day meet, the Tribe held its advantage over the Mountaineers but fell 277-69 to the Hokies and 251.5-94.5 to the Blue Devils.

Freshman Ben Skopic also had a strong weekend, delivering wins over the Mountaineers in both the 200-yard IM and 200-yard breast, as well as a critical win over both WVU and Duke in the 400-yard IM.

Senior Jaimie Miller continued to establish herself as the team leader on the women’s side, as she beat WVU with a time of 51.88 in the 100-yard free Friday. She followed up this performance Saturday with individual wins over the Mountaineers in the 50-yard free (23.62) and the 200-yard free (1:54.26).

Miller also teamed with senior Sophie Rittenhouse, junior Jess Crowley and sophomore Katie Sell to beat both Duke and WVU in the 400-yard medley relay with a time of 3:50.70. The women ultimately lost to VT 281-65 and 282-64 to Duke while getting the win over the Mountaineers.

The College returns to action next Saturday at 1 p.m. when it begins Colonial Athletic Association competition on the road at Towson.