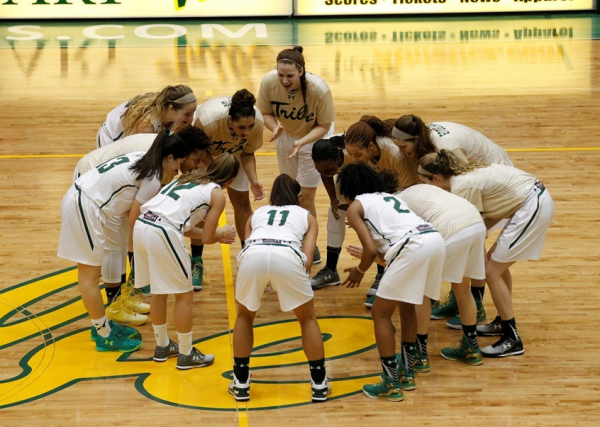 “Our spirits are real high here, and our expectations are high,” head coach Ed Swanson said about the upcoming season, his fourth at the helm. “And we want our Tribe fans to have high expectations for us as well.”

Our spirits are real high here, and our expectations are high,” head coach Ed Swanson said about the upcoming season, his fourth at the helm. “And we want our Tribe fans to have high expectations for us as well.”

The roster this season is loaded with experience after losing just one senior last season, and headlined by two preseason All-CAA Second Team selections: senior forward Alexandra Masaquel and senior guard Marlena Tremba. Tremba and Masaquel led the team in scoring last season, averaging 13.9 and 13.8 points per game, respectively, forming a dangerous inside-outside duo, and should continue to set the tone for the Tribe on the offensive end.

Junior center Abby Rendle, who received an Honorable Mention on the preseason All-CAA roster, also returns to the starting lineup after a productive 2015-16 season that was unfortunately cut short due to injury. Before sustaining that season-ending knock 17 games into the year, Rendle was actually leading the College in points (13.2) and rebounds (7.3) per game, and now, fully healthy, will look to once again combine with Masaquel in a formidable front court tandem.

Rounding out the starting lineup will be junior point guard Jenna Green and sophomore guard Bianca Boggs. Swanson singled out both Green and Boggs, a member of the All-CAA rookie team last year, as key players in determining if the Tribe has a breakout season in 2016-17.

“Those two players have been practicing at a really high level, not only performance-wise but energy-wise, in the preseason,” Swanson said. “I think Jenna Green and Bianca Boggs are going to be two players that we point to that really elevated their game … I really do believe that those are two players that we’ll really point to if we have a successful year.”

The Tribe’s bench also boasts a wealth of experience, including two seniors, a junior and two sophomores (sophomore guard/forward Misha Jones has already been declared unable to compete this year due to a leg injury, according to Swanson). This depth up and down the roster should help the Tribe remain strong on the court even when the starters take a breather, as well as providing the College with a bevy of leadership outside of the coaching staff.

“You have seven players, seven upperclassmen, that have been through the wars of the CAA conference,” Swanson said. “I’m hoping that experience will help our team this year.”

Additionally, the College has brought on three incoming freshmen, including forward Victoria Reynolds, who Swanson expects to contribute almost immediately.

“Six foot, kind of hybrid-type forward, who I think Tribe fans will be excited to see play,” Swanson said of Reynolds.

In terms of improving upon last season, Swanson discussed increasing aggressiveness on defense and playing more smoothly on offense, but in particular he said that the College must get better at rebounding if it wants to find success in the CAA. The Tribe had the worst rebounding margin in conference play last season, averaging 32.2 boards a game, while opponents averaged 41.9 when facing the College. The return of Rendle, who missed the majority of the conference slate last year, to the court should definitely help the cause on the backboards.

As the men’s team has become the go-to sport to attend for many  students at the College, the women’s team has lagged behind in terms of attendance. Swanson expressed hope that his team will become an attraction for Tribe fans, emphasizing the up-tempo pace of play he is encouraging his players to adopt.

We’re going to play an exciting, aggressive style of basketball,” Swanson said. “We’re going to get after teams defensively … and on offense I think we’re going to score the ball a lot more.”

The Tribe will open its season at Kaplan Arena this Sunday, Nov. 13, when the College hosts St. John’s, the reigning Big East champions. The game is scheduled for a 2 p.m. tipoff.