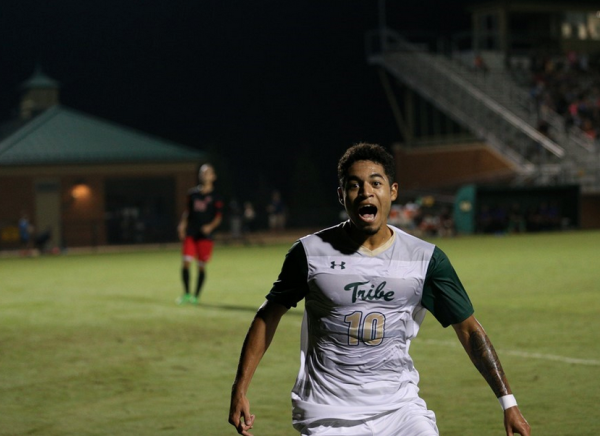 Sophomore forward Antonio Bustamante came up clutch again Saturday night, scoring the only goal in William and Mary’s 1-0 win over No. 4-seeded Elon to keep the season alive for at least one more game. Bustamante slipped through the Phoenix defense to beat the goalkeeper in the first half, and the College defense held strong to close out the upset victory. The Tribe is the No. 5 seed in the Colonial Athletic Association Championships and advance to play No. 1-seeded Hofstra.

The Tribe (11-6-2, 3-3-2 CAA) had not played in six days since its Oct. 29 postseason-clinching victory over Drexel, but head coach Chris Norris told Tribe Athletics before the game that he was optimistic about the matchup with Elon nonetheless.

“We didn’t play well [at Elon] the first time, so I think there’s motivation for us to have a good performance against them,” Norris said to Tribe Athletics. “We feel like we can compete with anyone in the league.”

We didn’t play well [at Elon] the first time, so I think there’s motivation for us to have a good performance against them,” Norris said to Tribe Athletics. “We feel like we can compete with anyone in the league.”

Norris was right; a very different Tribe team came to play at Elon Saturday night. The College grew into the game after a slow start, and their midfield dominance was rewarded with an early goal. In the 17th minute, Bustamante made a trademark late run forward from his midfield position, and junior forward William Eskay found Bustamante with a through pass. The Phoenix defender stumbled, and Bustamante stayed composed to stroke home his ninth goal of the season.

Having found its footing, the Tribe controlled proceedings throughout the first half. Redshirt junior goalkeeper Phil Breno marshalled his defense well. When a chance fell to Elon’s top scorer forward Elijah Agu, Breno stepped up. Agu found a pocket of space in the College penalty area, but Breno charged out of his goal, closing down the shooting angle. When Agu fired a shot, a diving Breno spread his legs wide and blocked the ball with his foot.

“Luckily, I had my foot out,” Breno said to Tribe Athletics after the game. “It was a big-time save.”

Luckily, I had my foot out,” Breno said to Tribe Athletics after the game. “It was a big-time save.”

Agu’s shot was the only moment of worry in an otherwise comfortable performance for the Tribe. Though Elon poured on the pressure in the second half in search of a goal, the Phoenix could not muster another shot on goal. Norris commended his team’s defensive effort after the game.

“[Elon] are very hard to keep from getting behind you for 90 minutes,” he said. “No. 18 [Agu] has had a great year, and we know he’s a handful, but fortunately when the defense got exposed, Phil [Breno] was there to come through with that big save.”

The Tribe defense continues to peak at the right time, recording its third straight shutout and fourth consecutive victory. Meanwhile, Bustamante felt that the College could have had a few more goals.

“As far as offensive opportunities, the other goalkeeper made some great saves, and sometimes there’s nothing you can do, but I think we played well as a unit up top,” Bustamate said to Tribe Athletics.

The Tribe attack, led by Bustamante, Eskay and sophomore forward Ryder Bell, continues to come up in big moments. Eskay and Bustamante also combined for the crucial game-winning goal against Drexel, and the College also owns the 10th highest goals-per-game average in the country (1.95).

The next challenge that the Tribe will face is a sterner one. Top-seeded defending champions Hofstra await in the semifinals, hosted at Hofstra’s home field in Hempstead, N.Y. The last time the College defeated Hofstra was in 2013 when the Tribe advanced to the CAA finals and qualified for the NCAA tournament. The College also lost 2-1 earlier in the season in Hempstead, but there are reasons to suggest that this week’s matchup may be different.

The Tribe rides on the back of its four-game winning streak, while Hofstra has won one in its last four games. Hofstra will also have waited two games since its last match, which could be an opportunity for the Tribe to earn a surprise victory. Norris remained reserved when asked about the upcoming game.

“We’re definitely excited to continue our season,” he said to Tribe Athletics

With a strong attack and stalwart defense both peaking at the right time, the Tribe could well be up to the challenge.