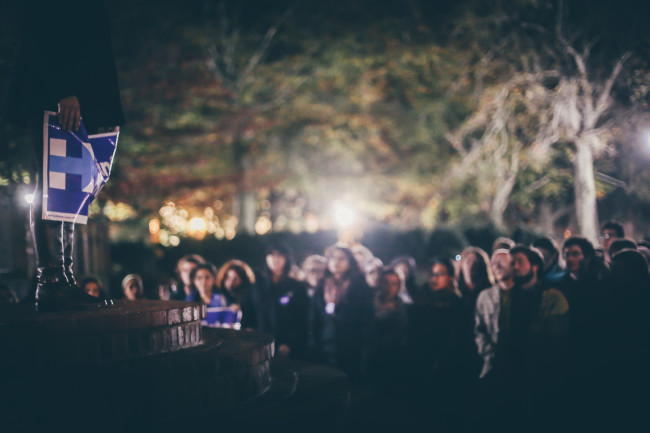 In the wake of the United States presidential election, students at the College of William and Mary organized a protest Wednesday night. Over 100 students gathered on the Sunken Garden to pause in silence and then protest a future Donald Trump presidency.

The protest was planned on the Facebook page “Overheard at William and Mary.” Students began with four minutes of silence in honor of the women and minorities that feel directly affected by Trump’s rhetoric. After those minutes, students shared personal stories and encouragements to continue fighting for policies that they care about for the next two hours.

Class of 2020 President Kelsey Vita ’20 addressed the hopelessness that many students were feeling. She said that she wanted to motivate them in order to make change in the future.

“I got very discouraged and I asked myself, ‘Why am I doing this?’ Like, what is the point of this if so much of America wants Donald Trump to be president, then what can I do?” Vita said. “But I think we just have to remember how many of us really want to see change, and if we unite together we can really make this happen.”

Many students shared similar feelings of anger and frustration towards the election results. Shelby Hurd ’19 said that she was appalled that people voted for Trump in light of comments he made during his campaign.

“People actually went out and voted for this man who said such homophobic, sexist, racist and xenophobic things,” Hurd said. “I felt like I needed to come to a safe place where other people hold my same views. I found out yesterday that my country hated me. Or at least half of it does.”

Jonah Sweeney ’20 said that this community needed to care for one another first and foremost.

“Together we can stand together in the face of our adversary,” Sweeney said. “Together we can beat these unsafe conditions … We’re this loving, encouraging community that’s willing to be there for each other and ensure each other’s safety.”

Students mentioned that they felt personally unsafe around campus, and some said that they had threatening or even physical altercations on election night. Maya Farr-Henderson ’20 said that she was approached by a group of students while out on Tuesday night and was fearful for her personal safety.

“I went out with a couple of friends just to walk around campus, and we were standing in a public area, talking with about 10 other people, when some people who were loud and rowdy came towards us,” Farr-Henderson said. “We all very quickly dispersed because it was something that you just don’t feel comfortable being on campus right now, especially at night.”

This feeling of unease was also discussed during the protest. Sophia Marcus ’19 said that she felt particularly unsafe after noticing three Trump supporters on the north steps of the Sunken Garden while many students spoke at the rally.

“It’s something that you feel, them being there,” Marcus said. “You may not act on it but just knowing what they stand for, I can’t see that they look at me any other way other than a subordinate, or an inferior. My great-grandfather was a slave. He helped build this country.”

One Trump supporter, William Iannacone ’17, said that he came out to see the protest and pay attention to some students’ concerns.

“I consider myself a leader on campus, I like to stay up to date on what’s going on,” Iannacone said. “Not the problems but the rifts within the community and I like to be up to date on those things so I can have actual conversations with people.”

However, many students said that they feel that this solidarity is not enough. Sam Yu ’17 said that allies of students of color and queer students need to advocate and take a stand for these students when their rights are threatened. He thinks that the time for respectability is past.