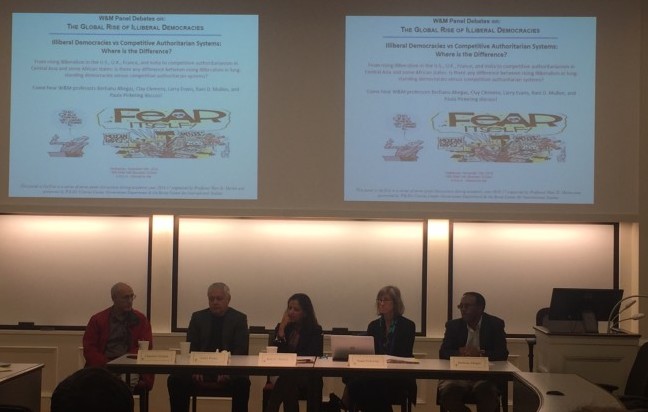 In the third lecture in a series of discussions on the rise of illiberal democracies, professors at the College of William and Mary sat down to discuss topics such as the populist president Modi of India to the President-elect of the United States, Donald Trump.

These lectures, hosted by the government department, the Charles Center and the Reeves Center for International Studies, cover the global rise of illiberalism, nationalism and populism. This month’s lecture focused on the differences between illiberal democracies and competitive authoritarian regimes. Government professors Rani Mullen, Clayton Clemens, Paula Pickering, Berhanu Abegaz and Larry Evans all spoke.

Mullen started the panel discussion by outlining the purpose of these talks in relation to current global events. She talked about how many academics are asking whether a new era of populism and illiberalism is taking hold of the political world.

Mullen said that the idea for these lectures was generated from a dinner discussion that professors from the College attended. She then sent out a Fareed Zakaria article on illiberal democracies to her work colleagues. Zakaria’s article, due to its popularity in the international relations community, was also referenced in the lecture.

Clemens focused on the distinction between illiberal democracies and competitive authoritarian regimes, saying that democratic elections in illiberal systems lead to unique outcomes.

“There’s no question about the freeness and fairness of the elections, no rigging of the ballots,” Clemens said. “It’s democratic in a sense, but also legitimizes repression by these governments. The winner feels legitimated by the mandate to pull all power into the executive or curb the power of the legislative and judiciary.”

Pickering discussed the role of manipulation in illiberal democracies by demagogues, who she said dishonestly sway voters with divisive, yet powerful, rhetoric.

“A lot of people think these societies are illiberal because that’s what they want, but I think that’s disingenuous,” Pickering said. “I think political leaders have manipulated the people and popular sentiment to win the electorate and increase their power, allowing them to hold onto office.”

Abegaz, a development economist, talked about how he sees this rise of illiberalism from an economic perspective, and that he believes it’s hard to confine this topic to a single region of the world.

Evans, the final panelist, talked about illiberalism in the United States and discussed the unprecedented victory of Trump. He said that he acknowledges that some students mainly came to the lecture to hear about the panel’s reaction to Trump’s victory.

“I know there are concerns about a Trump administration, and it’s not just from Democrats,” Evans said. “It’s among Republicans as well. He’s said some very racist and disagreeable things in the past year. These [outsourced] rust-belt jobs are not coming back, and there’s nothing Donald Trump can do about that.”

“Each election is more or less a referendum on the previous administration,” Evans said. “When Clinton was elected, it was because of dissatisfaction with Bush. When [George] W. Bush. was elected, it was because people wanted a change from Clinton. People didn’t vote for Obama just because of the hope and change rhetoric, people had had enough with Bush. I think this election, in large part, was about Barack Obama and his eight years in the White House.”

Evans said that he urges people to remember that the country has faced worse times and that the U.S. will pull through.