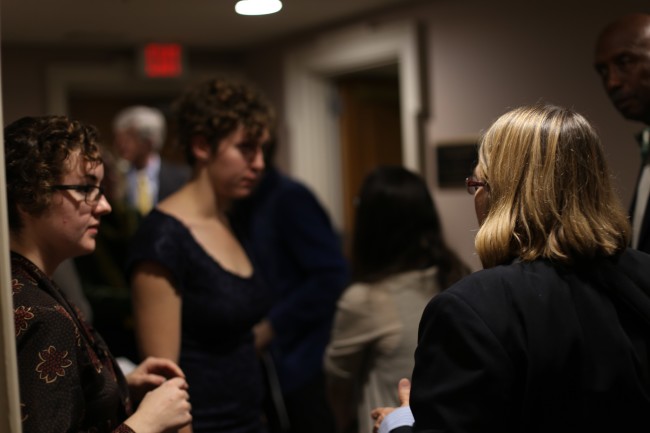 William and Mary Police Department Chief Deb Cheesebro left the meeting immediately following the students’ exit to meet with them in the hallway and to offer the police department’s full support.

These students did not represent a particular group, but one, Megan Sonner ’17, said that they were a group of students who have all been politically active at the College of William and Mary. She said that their presence at the BOV meeting was partially in response to an email sent by Vice President for Student Affairs Ginger Ambler ’88, Ph.D. ’06.

In this email sent Nov. 15, Ambler informed students that the College had received news Nov. 14 that a swastika with the words “Go Trump” had been left on a paper towel dispense in a residence hall bathroom. In light of this and other reports of harassment, Ambler included a link to the College’s online harassment report form and the Office of Compliance and Equity’s information page on harassment reporting options.

At the time, the online form did not include an anonymous reporting option, and Sonner said that she wanted to make sure the College was aware of the lack of that option.

“We definitely wanted to follow up on Ginger Ambler’s email about reporting, making sure that they had made changes or that they were aware that the reporting system was not anonymous at the time,” Sonner said. “We also wanted to pressure administration to take more proactive measures to prevent harassment rather than simply creating reporting methods that don’t do anything to prevent it.”

Members of the Board discussed anonymous reporting options during the Student Affairs committee meeting while Sonner and others stood in the back holding signs that read, “My friends aren’t safe.”

BOV member Lisa Roday said that when she met with Student Assembly President Eboni Brown ’17, they identified one of the most pressing student concerns as those relating to “election fallout.”

“This board has committed to providing our students with both a diverse and inclusive campus,” Roday said. “And there have been a number of both anecdotal and reported incidents against our students.”

Ambler, who was also present at the meeting, said that one of the challenges with creating an anonymous reporting option was that it could be difficult for the College to follow-up with concerns mentioned in reports. Roday said that while anonymous reporting could be good, making sure there was room to include more details in reports was important.

“I think the student signs in the back say a lot,” Roday said.

While administrators are still finalizing details, there will be an anonymous reporting option available for students.