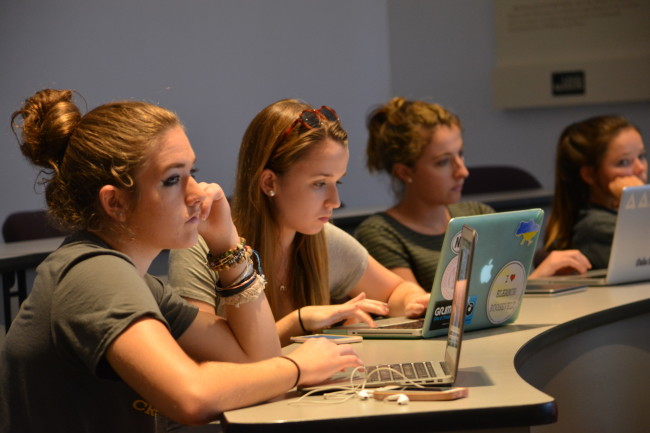 During the last Student Assembly senate meeting of the semester, Sen. E’Driana Berry ’17 resigned from her position because she will be graduating following the end of fall exams. Jaqueline Amaya-Mendez ’17 was selected to fill her place for the duration of this senate session.

Class of 2017 Emily Thomas ’17 took a moment to address the senate and mention Berry’s departure, saying that she enjoyed working with Berry and humorously offering her a parting gift.

“As we know, this is E’Driana Berry’s last meeting of all time,” Thomas said. “Because of this, we would like to grace her with this paper plate award, with the awards of ‘Most Likely to Give Side Eye,’ ‘Most Likely to Keep it a Touch Too Real,’ and ‘Least Likely to Enjoy Executive Liaison Updates.’”

To fill the position, Thomas said an application was sent out in an email to the senior class. Anyone was eligible to apply, and Thomas said that six applications were sent in for the vacancy.
A group comprised of Thomas and the remaining senior class senators Daniel Sequeira ’17, Gaela Normile ’17 and Olivia Camper ’17 decided which applicant to choose as the new senator.

The precedent for this process was established last fall when former Class of 2017 President Katherine Ambrose ’17 had to select a replacement for former Sen. T.J. Soroka ’17 when he resigned unexpectedly at the end of the fall semester to study abroad in the spring.

After establishing this application process, Ambrose and the other senators selected Olivia Camper who was later re-elected for the 324th session of the senate.

Sequeira said that the selection process started recently, coinciding with the end of Berry’s term.

“We started the process a few weeks ago and then we made our final decisions Sunday at the end of [Thanksgiving] break,” Sequeira said. “I was actually a part of the first round of the emergency selection of new senators. We were just looking for someone who we could work with closely and who is dedicated to the senate and showing up.”

Chairman of the Senate Danny O’Dea ’18 said that he did not have a role in picking the new senior senator as he is not a member of the senior class, but he said that he will miss working with Berry in the senate.

Berry said that when she ran for the senator position, she knew she would be graduating at the end of the fall semester, cutting her time as a senator short. Thomas said that she was aware of this at the time, but that Berry ran to fill an uncontested seat and therefore did not win an election over a senator who would have been able to serve for the whole term.

“There were initially only three people running for senate and somebody signed up at the last minute to fill the four spots, so the spots were uncontested,” Thomas said. “It wasn’t like someone who was going to be great lost out because of E’Driana, it was her helping to do her duty to the class.”

Amaya-Mendez will be replacing Berry when the senate resumes after break and said that she feels excited to join the senate. It was also not the first time Amaya-Mendez had thought about becoming a part of Student Assembly.

“This is all really new to me, so I’m really excited,” Mendez said. “Ever since freshman year I’ve thought about being a part of Student Assembly, but I was a part of so many other organizations. But I’m a spring semester senior, so why not apply and make the best of it?”

Mendez said that she thinks her prior experience and connections at the College of William and Mary will help her make a positive impact within the school community.

“I’m president of the Latin American Student Union and I’m good friends with a lot of leaders within the diverse community we have here at the College, and I felt that that’s a voice that needed to be represented here in Student Assembly,” Amaya-Mendez said.

Mendez’ first official senate meeting will be in January when the senate reconvenes for its first meeting of the spring semester.

Berry also served as the Senate’s Cabinet Delegate, meaning that she sat in on all of SA President Eboni Brown ’17’s cabinet meetings and had the responsibility of reporting back to senate. Following the wording of the Permanent Cabinet Delegate Act 2.0, Brown will be responsible for selecting Berry’s replacement for this role.