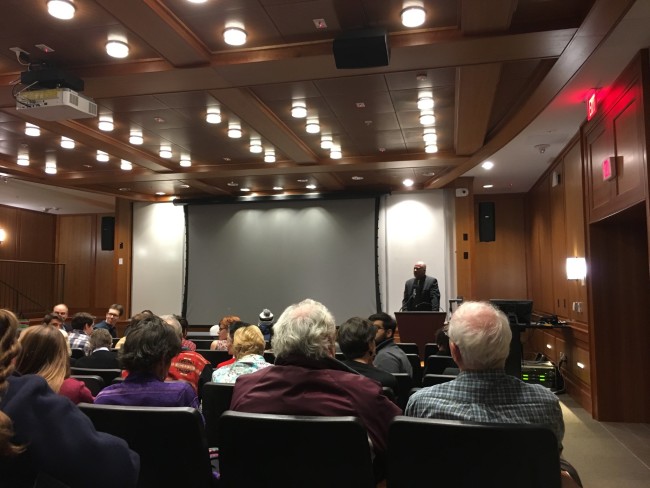 Known as a leader in the global effort to seek reparations from European slave-trading nations, Hilary Beckles delivered the 2016 George Taylor Ross Address on International Peace on Jan. 24.

The George Taylor Ross Address is an annual lecture hosted by the Reves Center for International Studies.

Beckles is the Vice Chancellor of the University of the West Indies and Vice President of the International Task Force for the UNESCO Slave Route Project. In 2014, he was appointed to the United Nations Secretary-General’s advisory board on sustainable development by the Secretary General of the U.N., Ban Ki-Moon.

“He is indeed a prolific scholar — a committed activist for social justice and among the most distinguished public intellectuals in the Caribbean,” Hanson said.

The audience was filled with members of the Williamsburg community as well as students from the College of William and Mary.

“I think it’s important to learn about the historical roots of contemporary social problems,” audience member Rachel Smith ’17 said. “I think this will be an interesting take on the type of issues in our country.”

Beckles began the lecture by describing the differences between social and economic growth.

“We have a polarization of two fundamental concepts,” Beckles said. “There are those who argue that economic growth is arguably the most important objective of politics, and then there are those who say it is social growth.”

According to Beckles, social growth is about citizenship and promoting inner values to improve humanity as a whole.
Beckles continued his speech by describing the system of slavery on a global economic scale. He then spoke about the origins of slavery and the timeline of its demise during the 19th century. Beckles said that he lamented the duration of time it has taken to abolish slavery and establish civil rights for descendants of slaves.

For the remainder of his lecture, he focused on the global discussion regarding reparatory justice for the crime of slavery.

As the Vice President of the University of the West Indies, Beckles was working on a project to build a new medical faculty complex on the university’s campus in Jamaica. Each of its three physical campuses are built on lands that were home to slave plantations 150 years ago.

Beckles went on to discuss the major impact slavery has had on the distribution of knowledge and creativity across the world and described the term “reparations” and what it means to his movement.

“It is not about black people standing around our street corners asking for handouts,” Beckles said. “Nobody’s going to give me a handout. It’s about asking those who have created massive institutional impoverishment of people … to give those people a chance.”

He also said that reparations should be paid to medical researchers in order to develop medications which will help the African American community fight illnesses like hypertension. He cited research that found that Nigerians, Ghanaians and West Africans had the same responses to hypertension drugs that white people did, but Africans of the diaspora had significantly weaker responses the drugs.

“My medical faculty, we have all the science … We know what to do to adjust these drugs to black people’s circumstances,” Beckles said. “Do we have the millions of dollars to invest in laboratories to do the work? No, we don’t.”

Beckles went on to discuss his latest actions working with governments to procure formal apologies and reparations. He said that most governments he has contacted have thus far been unwilling to issue a formal apology or offer any money. Many countries, including Britain, France, Germany, Russia and the United States, have issued statements of regret.

He also said that other countries, such as Nigeria, have been reluctant to join in asking for reparations because they once participated in the slave trade.

“Communities all across Africa are now saying, ‘There has to be reparatory justice,’” Beckles said. “We now have reparations commissions in the Caribbean. We have a reparations commission in this country … and in all the countries where there was slavery we have now established communities and networks for dealing with reparatory justice. This is a global situation. It is an international situation.”