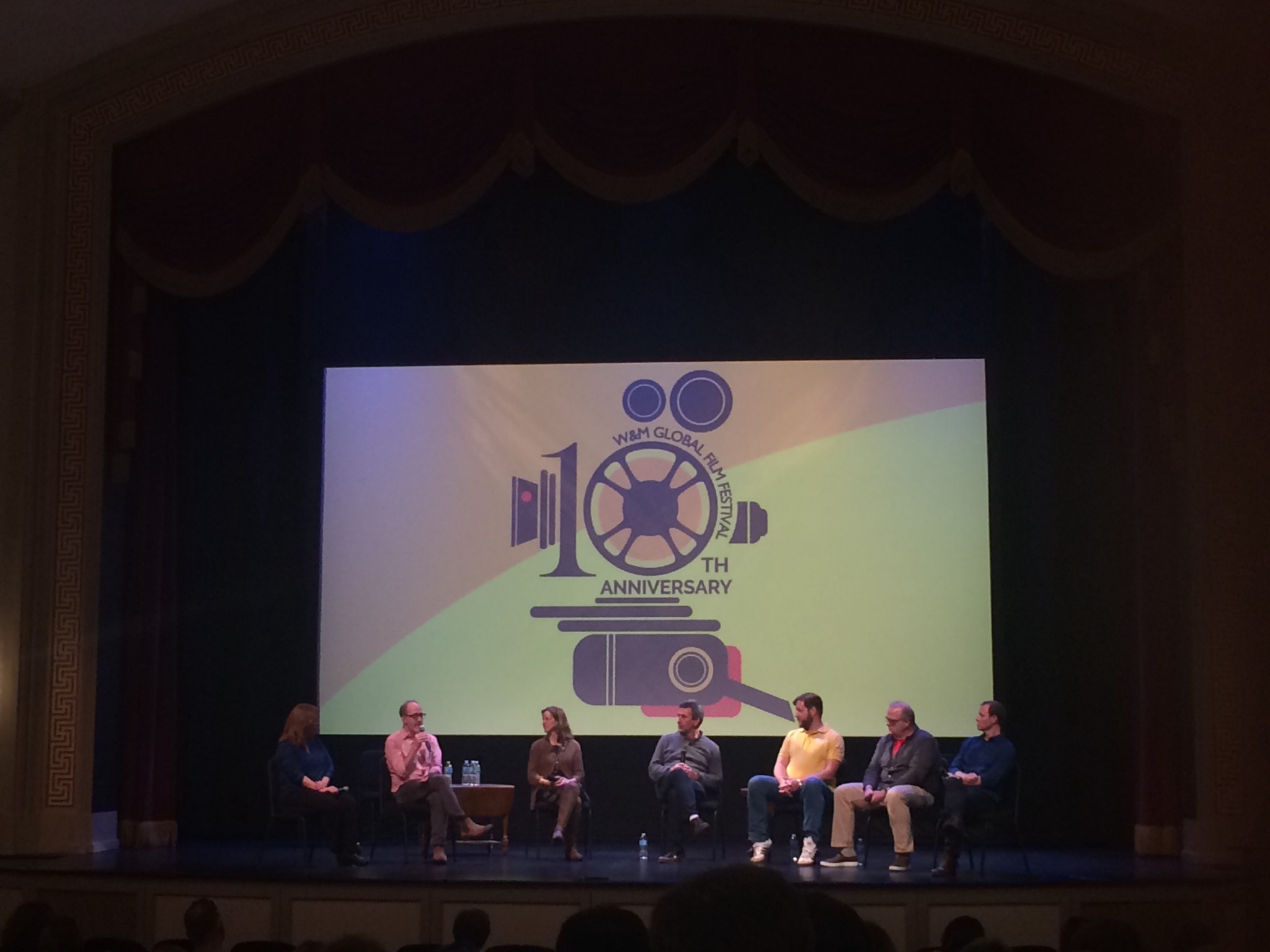 Whether it was a lovesick Indian tiger-hunter, a struggling Pakistani poet or an African-American man befriending members of the Ku Klux Klan, the 10th W&M Global Film Festival featured a unique blend of films — based on both fact and fiction — which captured the audience’s attention during four days of film and performing arts-related events Feb. 23 to 26.

The 10th anniversary of the W&M Global Film Festival attracted a host of film professionals, professors, student volunteers and students to experience and participate in an event that carried on the Festival’s tradition of creative global-mindedness while incorporating new events, like workshops and non-film performances, and changes to the Festival’s planning and organization.

The W&M Global Film Festival kicked off its 10th anniversary festivities with a reception hosted by the Muscarelle Museum of Art Thursday Feb. 23, giving students, faculty and community members a chance to mingle with some of the Festival’s special guests the first film of the weekend, “The Tiger Hunter.”

“The Tiger Hunter,” which made its Virginia debut., was produced in the United States and India and tells the story of an Indian man who travels to the United States in the 1970s to become an engineer. The film was one of many international productions showcased in the Festival. Friday’s film offerings included the director’s cut of “El Pez Azul,” a Cuban-Mexican production, the Virginia premiere of “Forgive Don’t Forget,” a U.S.-Japan production, and “A Tale of Two Sisters,” a South Korean project.

The documentary film “Tower” premiered in Virginia Friday night, telling the story of the 1966 mass school shooting at the University of Texas-Austin. The film employed animation spliced occasionally with archival footage to pictorialize the experience of people who were affected by or witnessed the massacre. The award-winning documentary was produced by Megan Gilbride ’00. She discussed how the decision to use animation for the film was made by the director, Keith Maitland.

“He thought the animation technique would be a great way to bring this to life and to really place the audience in this moment, minute by minute as it was unfolding,” Gilbride said.

Saturday, the Kimball Theatre saw the Virginia premiere of “Mah e Mir,” a Pakistani film paralleling the lives of a modern-day Pakistani poet and the 18th century poet Mir Taqi Mir, as well as the British production “The Double.”

The Festival also held a 30th anniversary showcase of the founding and early cast members of the group Improvisational Theatre. The former members answered questions about the origins of the group and their post-graduate lives. Some members shared advice about pursuing a career in the acting world after graduation. Craig Cackowski ’91, who has appeared in shows like “Community,” “Drunk History,” “VEEP” and “How I Met Your Mother,” discussed how the realization that he was not going to be the best was “freeing” for him, and alluded to his now-illustrious classmate, comedian Patton Oswalt ’91.

The documentary, “Accidental Courtesy: Daryl Davis, Race, and America” was shown Saturday night. The filmmakers follow African-American musician Daryl Davis, as he meets and builds relationships with members of the Ku Klux Klan to persuade them to question their beliefs. After the film was screened, the film’s director, Matt Ornstein, and Daryl Davis himself participated in a question-and-answer session with the audience.

Lorraine Pettit ’17, who attended the film’s Virginia premiere at the Festival, described it as “incredibly powerful,” and spoke to the value of having a question-and-answer session immediately after the film.

“I feel like you still get a lot out of it from just watching it, but that time as the audience together to process the information is really, really powerful too,” Pettit said.

Sunday, the College of William and Mary Wind Ensemble accompanied three silent films: two films by Charlie Chaplin and another by Buster Keaton and Edward F. Cline. The Festival’s closing day also included a screening of the French and Swiss animated film, “My Life as a Zucchini.”

In addition to the film screenings, there were also a variety of alumni-run workshops made available for students to participate in. Jamie Northrup ’04 held two workshops for students: one on how to film and act in a stunt fight scene, and the other on how to operate a Steadicam device. Sean Cusack ’11, who has worked on editing teams for shows like truTV’s “Impractical Jokers” and TV Land’s “The Jim Gaffigan Show”, held a workshop on editing. Cackowski, who led a workshop on improv acting skills, commented on the experience.

“We had the current I.T. squad and alums from all eras — so that was so cool to see,” Cackowski said.

They talked about the equipment they used, marketing techniques, funding and how they handled bumps in the road, such as suddenly running out of funds when they were halfway across the world filming in Japan. Bennett expressed his thoughts on the film and what it’s like to discuss its production with other people.

This year’s Global Film Festival was produced by Stackhouse and Liz Sykes ’06. While the Festival has maintained several key featured components over the years, some considerable changes were made for the Festival’s 10th year. For example, this year’s Festival showcased more performing arts outside of film.

“We had more theater, we brought in the actors and it’s just part of a larger goal that this can become something larger across disciplines,” Stackhouse said.

One of the biggest changes to the Festival in its 10th year was the decision to outsource a lot of the planning, which altered the level of student participation. Stackhouse and Sykes, who started a production company together in 2011, were brought on over the summer to oversee the Festival’s production.

“The focus was just getting the program established earlier and being more robust, and that involved us doing a lot of the legwork in advance,” Sykes said. “It was my understanding in past years that students had done that legwork and that responsibility fell to us this year.”

Stackhouse discussed the different ways in which students got involved in the 10th year of the Festival.

“We produced on a quicker timeline and we had a student advisory council of about 20 members who determined all the shorts programming, that worked in conjunction with the Canon international film contests … and we had volunteers that included both them and other students as well,” Stackhouse said. “We had over 100 students involved in the Festival.”

According to Embrey, volunteering with the Festival this year was a very different experience from being an intern last year.

“This year there are professional photographers and videographers, et cetera, essentially doing all the things that interns did in the past,” Embrey said.

As a film and media studies major, Embrey said she considered the Global Film Festival to be one of the few opportunities to be involved with a film festival as an undergraduate.

Journey recalled working at the Global Film Festival himself starting in 2009 when he was a sophomore at the College. He said he believes that the skills he practiced while helping with the Festival aided him after he graduated and began his career in the film industry.

“I edited videos for the Festival, I worked on the website for the Festival and I think those skills did translate to what I’m doing now,” Journey said. “I think that’s really important to have those practical, hands-on skills because otherwise I don’t think I would have gotten that same experience had I not been able to work on the Festivals that I did … I certainly think that it’s helped for where I am now.”

Journey spoke about how being exposed to the diversity of cultural topics showcased during the Global Film Festival over the years connected to his work on an international film and what it has been like to go from someone helping with the Festival to someone presenting at the Festival.