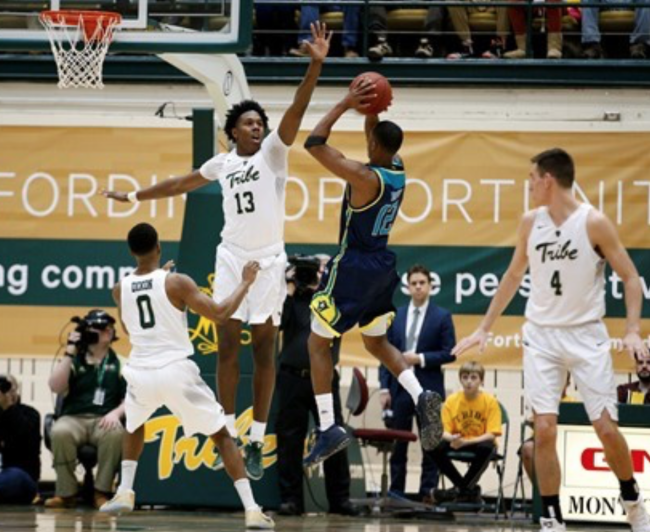 The game began with a three by Prewitt in the first 30 seconds, followed by a fast-break layup from Dixon, putting the Tribe up 5-0. A seven-point run dominated by the two seniors followed with the College keeping the lead for the majority of the first half.

The Tribe led 27-26 until a layup by Elon’s junior forward Brian Dawkins put the Phoenix up by one with just over three minutes left in the half. A good three by Malinowski put the Tribe back in the lead until Elon sophomore guard Dainan Swoope made three free throws, stealing a 31-30 lead for the Phoenix.

The Tribe went into the second half down 33-30. Junior forward Jack Whitman scored the first points of the second half with a layup assisted by Dixon. Moments later, a Prewitt layup put the College back in the lead.

The Phoenix could not keep up with the College’s momentum as it increased the lead to eight points with six seconds left in the CAA quarterfinal matchup. With 33 seconds remaining, Prewitt drilled a clutch three, pushing the Tribe lead to four, 67-63. Dixon nailed all four of his free throws in the last 20 seconds of the game to seal the victory for the Tribe.

Elon did not hit a shot in the final six minutes, save a three-point shot with two seconds remaining by junior guard Dmitri Thompson.

The College shot 61.9 percent at the foul line, 31.3 percent from three and 41.4 percent overall from the field. The Tribe continued to the semifinals to take on UNC-Wilmington March 5.

The Tribe took on UNC-Wilmington March 5 in the CAA Semifinals. Despite its fight, the College fell 105-94 to the Seahawks.

Prewitt led the Tribe offense with 24 points, followed by junior guard David Cohn with 18, freshman forward Nathan Knight with 15 and Dixon with 10.

UNC-Wilmington’s sophomore forward Devontae Cacok scored the first points of the game with on a driving layup. The Tribe quickly took the lead with a layup and good free throw by Whitman to complete an old-fashioned three point play.

Scoring was back and forth throughout the first half until the two-minute mark. The Seahawks, up 42-36, scored four quick points to increase a six-point lead to 10. The run was only broken by one foul line shot by Prewitt just before the half.

Cohn dominated Tribe scoring in the first half with 15 of his 18 total points. Rowley followed with nine. UNCW’s defense keyed its first half effort, as the College had no steals at the end of the period, while the Seahawks had three. The Tribe went into the second half down 47-37.

Prewitt started off the second half with a good shot in the paint after a strong drive. Despite the Tribe’s efforts, it never saw a lead in the half. The closest the College came to UNC-Wilmington was with 16 minutes left in the second half when the Tribe closed the Seahawk lead to six with a Dixon three, assisted by Cohn.

Prewitt took over the offense in the second half, scoring 18 of his 24 points. Knight stepped up for the Tribe following halftime, scoring all 15 of his points after the break.

As the game came to a close, the Tribe simply didn’t have the firepower to match the Seahawks. Two good free throws each by Knight and senior guard Michael Schlotman marked the final points of this CAA semifinal match. The Tribe fell just short of the Seahawks with a final score of 105-94.

UNC-Wilmington defeated Charleston March 6 in the CAA championship 78-69 to earn an automatic berth to the NCAA tournament, where they will face Virginia.