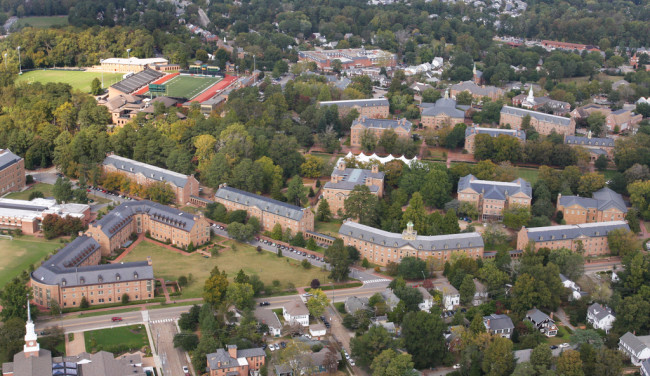 Greek life has also become the focus of the platform of one presidential contender — Elijah Levine ’18 — as he looks at how Greek life affects sexual assault and diversity at the College.

Additionally, out of the 18 students running for spots in the SA senate, nine are in Panhellenic sororities or IFC fraternities, and one, William Jackson ’18, is the president of Alpha Phi Alpha fraternity, which is not a part of the IFC.

At the time of last year’s election, SA President Eboni Brown ’17 and SA Vice President Hannah McKiernan ’17 were not members of Greek life. The other candidates, Katherine Ambrose ’17 and Liz Jacob ’17, and A.J. Scalia ’17 and Justin Canakis ’17 were. Since her induction, Brown has been initiated into Delta Sigma Theta sorority, which is a member of the National Pan-Hellenic Council, the governing body for traditionally African-American fraternities and sororities.

I definitely think that one of our strengths in our campaign was our position as two people not in an IFC/Panhellenic organization,” McKiernan said in an email.

“I definitely think that one of our strengths in our campaign was our position as two people not in an IFC/Panhellenic organization,” McKiernan said in an email. “In past years, I think that a lot of the campaigning was focused on this demographic but our position outside of those groups allowed us the opportunity to engage more closely with non-Greek students and focused attention of other campaigns on these groups who may often feel left out of the SA election hype. I absolutely believe that inclusion of non-Greek students is essential to a good campaign because these students, myself included, make up over 60 percent of the student body and are just as interested in the issues that affect Student Assembly as an IFC or Panhellenic organization. I hope that our term has given these groups the opportunity to make their voices heard and feel as though they have a stake in what happens in SA as opposed to simply feeling unwanted or unheard.”

Levine and Yackow’s platform focuses in on Greek life, particularly in how the College’s Sexual Assault Task Force report highlighted that Greek males are more likely to be the perpetrators of sexual assault. Levine said he was serving on the IFC when the College initially went under Title IX investigation, and he saw these statistics spread around as red flags, but that he believes it was treated like an abstract problem.

Their platform states that it is necessary for the College to address the culture present that allows rape, particularly male privilege Levine identifies as being present in fraternities.

“We subliminally are not surprised that this is the case, but the way we approach the conversation on sexual assault is short-sighted,” Levine said. “It needs to implicate my privilege, the male privilege of other fraternity men, to take a hard line stance on sexual assault. We never look it in the face and do a thorough investigation of how our own actions perpetuate this. It’s not an earnest effort unless that statistic is taken at a very deep level. There’s a glaring myopia that fraternity men have, it’s right in front of our face and we have the privilege to not look at it.”

Levine said that although he is the president of one of these organizations he identifies as being guilty in perpetuating sexual assault, he believes this “irony” is the center of why he is running for SA president. He said that he believes that people need to look beyond someone’s labels to see the circumstances of their actions and behaviors — more specifically, he said he hopes people will look beyond his identity as Sigma Chi’s president to understand why he joined an IFC fraternity.

According to Levine, for most of his childhood, he was predominately surrounded by white people. He believes that this upbringing influenced his decisions to join Sigma Chi.

“Those 18 years before I came here, necessarily set me in the way that I pursued my social life,” Levine said. “I can tell you that I was a totally different person when I stepped on this campus, I couldn’t be more different. Last summer, where I was the connections I was beginning to make outside of Greek life … opened my eyes to the fact that my circumstances were due to me growing up. It didn’t take away from my identity, but to an extent was enculturated identity. Greek life is very normative and exclusive, from my experiences being in there, I know that it is. When I broadened my social scope, I began to see the tangible effects of that exclusivity. That is a conversation that is not conducted a lot in Greek life, and it has not been discussed by other Greek life candidates.”

Levine said that he and Yackow have both moved away, to an extent, from Greek life because of what they’ve identified as problems within it. He said that he has “scrutinized” issues in Greek life such as racial biases, transphobia and sexism. Because of this, he believes he is a candidate that also can appeal to non-Greek students.

“For that voice to be inside Greek life is unique,” Levine said. “I think that [these problems] have been largely ignored because a lot of students, for a large part of my student career, have seen that as an irreconcilable worldview. By addressing it, we are on a path to considering more nuance.”

O’Dea and Srikanth, whose platform does not explicitly mention Greek life, also believe that they can appeal to non-Greek students. In discussing sexual assault, their platform also addresses cultural issues like toxic masculinity, but it does not link it with Greek life. Srikanth said that although she is involved in her sorority, she and O’Dea still believe there are problems in Greek life.

“I am proud of being in my sorority, I love my sisters, but we both recognize that there are still a lot of issues with the Greek community,” Srikanth said. “We aren’t going to try and deny that, we see problems with masculinity in fraternities. We do bring an insider’s perspective — we can see how Greek life operates and how we can also fix it from a realistic point of view. We are also part of other groups on campus … being involved in a lot of different organizations bring us a bunch of different perspectives.”

O’Dea said that he and Srikanth, in drafting their platform, focused on how their experiences at the College and with the world are not universal.

Our entire campaign is built on the concept of reaching out to as many voices as possible on this campus and having those conversations and fostering that dialogue,” O’Dea said.

“Our entire campaign is built on the concept of reaching out to as many voices as possible on this campus and having those conversations and fostering that dialogue,” O’Dea said. “We hope the student body believes, that throughout our campaign and throughout our outreach, that we have reached out to as many perspectives as we could and gotten to see and hear about this campus from as many points of view as possible. We believe that we have been building that bridge since the first day. We hope that when the election comes it is time for us to cross it.”

While Greeks for Respect, Inclusion and Diversity President Jack Sims ’19 said the group will not be endorsing a candidate, the group is excited to see that both platforms focus on diversity and inclusion.

“The Greek Community has a lot of room for improvement concerning these specific issues,” Sims said in an email. “No matter the outcome of the election, GRID is excited to work with the 2017-2018 Student Assembly to continue facilitating a dialogue about these complex issues.”