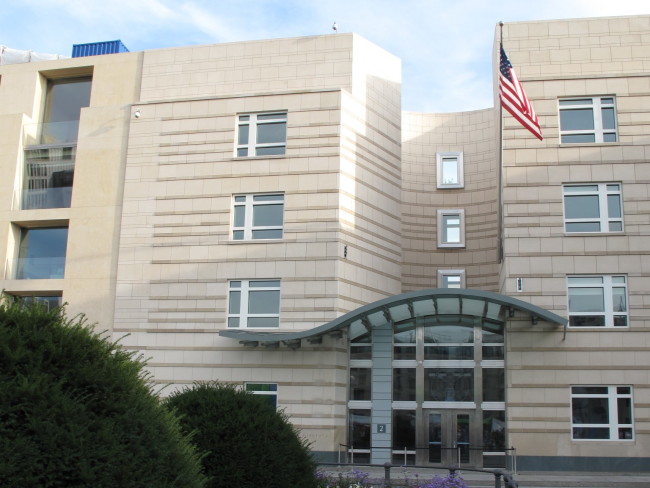 Thursday, March 16, the College of William and Mary welcomed Chargé d’Affaires of the U.S. Embassy in Berlin, Kent Logsdon, who hosted a question-and-answer session in Blow Memorial Hall for students interested in international affairs and careers in the U.S. Foreign Service.

Co-director of the Social Sciences Research Methods Center and government professor Marcus Holmes organized the event. SSRMC aims to promote students’ understanding of undergraduate research and to provide opportunities for students to engage in their own.

“It provides a very informal way for students to get a little data for a project they might be working on in addition to learning about potential employment opportunities,” Holmes said. “In this particular instance, when you have somebody that happens to be here that has done foreign service, that gets people’s attention.”

With no U.S. ambassador to Germany currently appointed, Logsdon, previously the deputy chief of mission at the embassy, acts as ambassador. He said that the lack of an immediate appointment for an ambassador was “not that unusual.”

“It’s traditional that it will take a few months, and technically, normally, we’d expect a new ambassador to Germany by August, September,” Logsdon said.

Logsdon returned to the United States to accompany Chancellor of Germany Angela Merkel, who was scheduled to meet U.S. President Donald Trump for the first time Friday, March 17, to discuss the countries’ relationship.

According to Logsdon, one of Germany’s important pillars of security is the U.S. “transatlantic” relationship with Germany.

“That’s been German security since World War II,” Logsdon said. “The administration of Donald Trump had made some statements that had made the Germans very nervous, early on especially.”

In the wake of the election, Logsdon said he and his team worked rigorously to maintain the relationship between the United States and Germany.

“We have spent a lot of our time in the last few months essentially reassuring the German public and the German government that the U.S. — German relationship is really important,” Logsdon said.

“There’s probably not a crisis in the world that the U.S. government and the German government have not worked on together in some way,” Logsdon said. “If there was another country that I had to point to that really helped in West Africa on the Ebola crisis, it was Germany.”

According to Logsdon, roles of the embassy include outreach, which involves visits to German schools, and the relay of German events back to Washington, D.C.

“What you get from the embassy is we try very hard to give the context, give the view, why is it important to U.S. interests, what might it mean,” Logsdon said. “We will look to speculate for example and try to give a sense of what the parliament might look like, the Bundestag, in September if this happens or that happens. We oftentimes are just reporting back a German reaction to a U.S. policy.”

He also believes that Germany has been “thinking very hard about its own existence” since the Brexit referendum.

“That was a shock at one of their pillars of security, which is Europe, the whole European project, the connection with the French, and all of Europe, Germany was very comfortable in their worldview,” Logsdon said.

Alex Yung ’19, an international relations major, said he attended the question-and-answer session because he was worried about the current handling of affairs in the Department of State.

“I came in with a lot of concerns with how the State Department was being run right now,” Yung said. “I think Mr. Logsdon did a lot to assuage my fears.”

Hannah Hampton ’19 said she agreed with efforts to uphold American ties in the country’s relationship with Germany.

“Politically, we have to remain strong with Germany,” Hampton said. “We have to actually still care even though so many things that are changing.”

Hampton, who is a double major in international relations and Russian and post-Soviet studies, said that she attended the talk to get a feel for the job and believes that the session strengthened her desire to pursue a similar career.

“If I have one thing to encourage you all to do, it is to take advantage of opportunities to go study abroad,” Logsdon said.