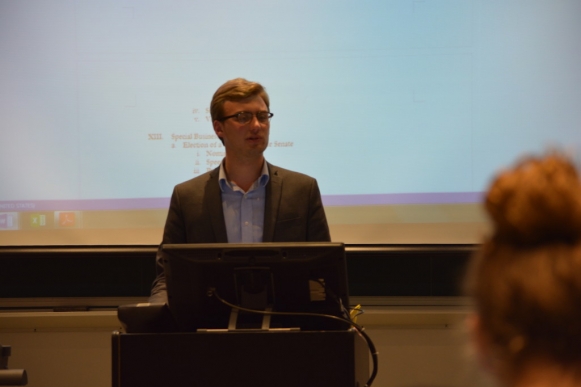 In a meeting that started with senators singing along with the soundtrack of Disney’s animated movie, Moana, Chairman of the Senate Danny O’Dea ’18 resigned from his role in the Student Assembly senate, effective immediately.

After senators introduced three new bills, O’Dea moved the senate into closed session to discuss his reasons for resignation. This follows his loss to SA President-elect Elijah Levine ’18 March 23.

Over the last three years in Student Assembly I have gained the values of servitude, that every action done in the position of SA senator needs to be done with the needs and desires of the student body taken into account first and foremost,” O’Dea said.

“Over the last three years in Student Assembly I have gained the values of servitude, that every action done in the position of SA senator needs to be done with the needs and desires of the student body taken into account first and foremost,” O’Dea said. “With that in mind, over the last few days, it has been brought to my attention, and after no insignificant amount of deliberation, that my current presence as a member of leadership in senate, serves more as a divisive one than a productive one. Resigning isn’t something I wanted to do, but it is something I believe is necessary for the productive transfer of leadership to occur. I wish nothing but the best for the 325th session and I’d like to leave the senate a more productive and effective organization than when I got there.”

At the start of next week’s meeting, the senate will still be in the 324th session, so current SA Vice President Hannah McKiernan ’17 will preside over the senate. Had O’Dea not resigned, senators would have elected a new senate chair following Levine’s inauguration. Now, senators will elect an interim chairman of the senate at the start of next week’s meeting, who will serve for the weeks before inauguration.

“The Student Assembly values Danny’s leadership and we will miss his presence,” SA President Eboni Brown ’17 said in an email. “We are thankful for the work he has done, and though we are sorry to see him go but understand that he has to do what is best for him.”

Also, Sen. Noah Ferris ’20, who was re-elected last week, announced his resignation from senate. However, so as to not require an additional election, Ferris said he will wait to make his resignation official until the first meeting of the next session. When asked by Sen. Alaina Shreves ’18 why he wished to resign, he said he was not comfortable answering that.

Once he resigns, Class of 2020 President Kelsey Vita ’20, working with the other class of 2020 senators, will find someone to fill his seat in the interim. When the class of 2021 votes for their representatives in the fall, there will be a special election to fill Ferris’ seat.

Additionally, Sen. Brendan Boylan ’19 introduced the Undersecretary Accountability Act, which through an amendment, would allow senators to confirm all SA undersecretaries, in addition to secretaries. This, if passed, would affect Levine and SA Vice President-elect Annelise Yackow ‘18’s executive staff picks. These confirmation hearings would begin at the start of the 325th session.

However, Chief of Staff Sahil Mehrotra ’17 said that he believed that it is not worth it to push through a constitutional amendment, because he does not believe senate confirmations are not productive.

“I think confirmation hearings are a complete waste of time for senate, honestly,” Mehrotra said. “We bring people in, we ask them one question, and then we sit around and then someone calls it to question and we approve it unanimously. I have never been here for a productive hearing. Executive usually does a good job, there are off the top of my head 20 or 25 undersecretaries. That’s a lot of time spent confirming positions that there isn’t a lot of controversy over.”

If passed, this bill would require 75 percent of the senate to vote in favor of the amendment. Then, it would go to the graduate council for approval, where it would sit for 30 academic days before going into effect. Currently, the SA code allows senators to call any executive member to the floor to answer questions.