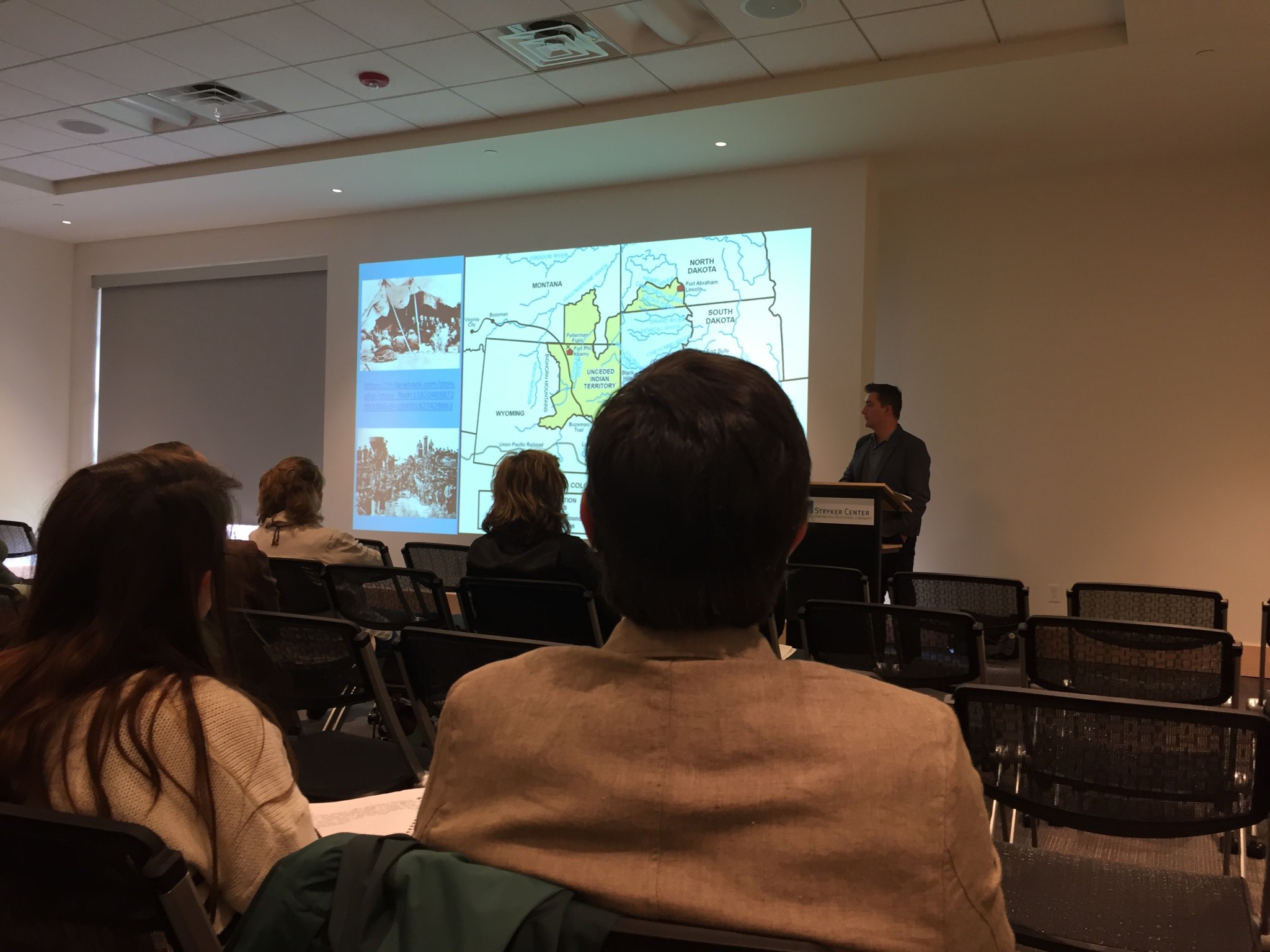 The first in a series of lectures that bring the College of William and Mary history professors to talk about contemporary issues was held at the Stryker Center Monday, March 27. The talk was titled “A Historian’s Response: Standoff at Standing Rock” and was co-sponsored by The Lyon Gardiner Tyler Department of History at the College and the Williamsburg Public Library.

The lecture focused on providing context for the Dakota Access Pipeline controversy by explaining the history of conflict between the U.S. government and the Lakota tribe, as well as describing why this particular pipeline is so contentious. It was also intended to expound upon the power of native activism in the 21st century.

History professor Andrew Fisher gave the lecture. His research focuses on environmental and indigenous history of the Columbian Basin in the Pacific Northwest. He said he followed the DAPL conflict closely because it parallels his own research. He first gave background information about what is happening on the ground with the pipeline right now, explaining that this pipeline has been contested from the beginning by the Lakota tribe.

“The water protectors refer to the DAPL as the black snake, because of an ancient story,” Fisher said. “There was a prophecy saying there was a black snake above the ground, highways, and when it goes underground it’s going to be devastating to the earth.”

Fisher said the the Lakota are specifically concerned that the DAPL will explode and contaminate the Missouri River, which is the main source of water for the tribe. Since 2010, over 3,300 incidents of crude oil and liquefied natural gas leaks or ruptures have occurred on U.S. pipelines according to the Pipeline and Hazardous Materials Safety Organization. The pipeline is set to carry 570,000 gallons of oil and cost nearly $4 billion.

This pipeline is set to begin carrying oil any day now, perhaps next week,” Fisher said.

“This pipeline is set to begin carrying oil any day now, perhaps next week,” Fisher said.

Although Fisher did provide information about the legality of the pipeline and conflict over it, he maintained that as a historian, his job is to provide background and connections.

“My purpose today isn’t to trace the legal disputes or the protests, rather as a historian, it’s my job to provide context, legal and historical, that helps people to understand what has shaped current events,” Fisher said.

Fisher continued to explain that unless you are aware of the larger context of indigenous rights and how they have been constantly disrespected, you cannot understand why there is so much conflict over this particular pipeline. He said the Lakota want respect, and their rallying cry, “Mni wiconi,” means “water is life” and emphasizes their request for respect of their basic necessities. The Lakota want to be recognized as a sovereign nation within the United States, however they havxe always been seen as an impediment to modernization.

“From the early 19th century, the Lakotas have often been seen as being in the way of American progress,” Fisher said.

Fisher went on to give a history of the Lakota tribe and its quest for autonomy. He explained that they themselves moved west during the 17th century and displaced other tribes. However, Fisher said that there are important differences between what the Lakota did back then and what the United States is doing now. He said that the decision for the Lakota to move was made through a series of pragmatic decisions about trade possibilities and bison availability, not out of a thirst for conquest.

At this time in history, Fisher said that Thomas Jefferson sent Lewis and Clark on their expedition with explicit instructions to make a good impression on the Lakota because of their trade connections. However, Fisher said, this did not happen.

“[Lewis and Clark] offered the tribe gifts they considered inadequate and fired a gun to attempt to impress them,” Fisher said.

Fisher explained the root confusion over the argument about whether the DAPL is on reservation land or not. He said that the Lakota had never technically ceded the land that the DAPL is on, even though the federal government considered it ceded. Fisher said this led to deep mistrust between the two entities.

“The Lakotas have a long history with the U.S. government, and it’s a bitter one,” Fisher said. “A history of being ignored and having their rights trampled on.”

Bright Sun, a member of the Williamsburg community, asked why the tribes in Virginia are not considering helping the water protectors.

“I don’t see much activity with the Virginia tribes; some are state recognized, just one is federally recognized,” Sun said. “They have not made moves to help Standing Rock.”

Fisher replied that he believes the Virginia tribes are preoccupied with their own struggles. He said that many of the tribes are working to become federally recognized at the moment and probably do not have the time to leave Virginia. He also said that while being recognized by the federal government is risky, he believes the positives outweigh the negatives.

“Being recognized by the federal government is certainly a double-edged sword,” Fisher said. “The Standing Rock case also shows that treaties and reservations and the sovereignty that they hold can be a powerful weapon in this fight.”

Laura Ansley, a member of the Williamsburg community, asked whether divestment, or the withdrawal of investments from businesses supporting the pipeline, was a possible way to discourage the pipeline.

The whole country of Norway did it … I think this is an effective way to take a stand without physically going out to South Dakota,” Ansley said.

“The whole country of Norway did it … I think this is an effective way to take a stand without physically going out to South Dakota,” Ansley said.

Fisher agreed that putting economic pressure on a company when legal arguments do not work would be a good idea.

Fisher emphasized that this conflict is not disappearing any time soon.

“The fight is not over,” Fisher said. “They are already gearing up to fight the Keystone XL pipeline. These issues are not going away, just as tribes are not going away. Conflicts like the conflict at Standing Rock are the legacy of conquest. This will not end until treaties and tribal sovereignty are upheld in action as well as in word.”