This weekend featured clear skies, warm temperatures and the smell of spring, and beer, in the air.

The Virginia Beer Company celebrated its first anniversary and Waypost Weekend bash Friday through Sunday, beginning with the much-anticipated bottle release of the company’s two new Waypost batches amidst music and food trucks. The celebration continued Saturday with live bands, cornhole and sloshing glasses of craft beer. Sunday marked the end of the weekend-long festival with a “hangover jazz brunch,” during which the Company released its coffee porter stout, created in collaboration with Williamsburg’s Aromas Café.

“It’s really been that alumni connection that’s really pulled us back,” Willey said. “So the experiences we’ve had serving the College on the annual giving board, kind of getting connected with other alums … the whole ‘For the Bold’ campaign … The William and Mary community has been very supportive, and it was a big reason we decided to come back to Williamsburg.”

The Company released two new batches Friday: “I Pray You Remember,” also known as Waypost Green, and “Biere de Garde,” or Waypost Black. The Waypost Green batch was aged in Islay Scotch casks for four months, resulting in a beer with a kick and smoky peat undertones. Alternatively, the Waypost Black was aged in Kentucky Bourbon barrels, giving it a sweet, rich, chocolaty flavor that was smoother than its sister brew.

“The fun of it — the reception we were looking for — was to be kind of polarizing, because some people love scotch and will specifically want to drink that beer, and some people won’t like that beer, but it’s fun to see the reactions,” Willey said.

Both Willey and Smith expressed their satisfaction with the reception of the brews and are excited to offer their first bottled beers to the public. 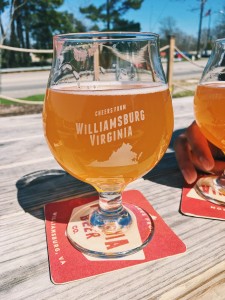 The anniversary celebration continued Saturday with two different stages of live music in addition to more food trucks and beer. There were three food trucks on the lot: two for meal options (Your Pie and Slideways), and one for those with a hankering to satisfy their sweet tooth (Sinful Treats).

“I thought that the food truck selection complimented the beer quite well. There was a little bit of everything, from super salty to sweet,” Adam Crenshaw ’17 said.

All good things must come to an end, but the Virginia Beer Company was set on ending the weekend with a bang. Little Piggy’s Wurst Nightmare provided catering for a non-ticketed “jazz hangover brunch” at the Company Sunday. Free Emily’s Donuts were available, and Timeline Jazz performed soothing background tunes.

Additionally, the Virginia Beer Company released another base brew named “Dammit! Brad’s Hungover.” The porter was then mixed with Aromas Café’s cold brew coffee to create the City Plus Coffee Porter. The mixed porter was served in branded Virginia Beer Company mugs and was intended to be a smooth pick-me-up for anyone who had a headache that needed some TLC. “Dammit! Brad’s Hungover” is the base porter recipe with full-bodied chocolate, bourbon and maple syrup flavors.

Willey and Smith were excited about the festival’s success.

“One of the things Robby and I love about this, and what we do, is that we are a community gathering spot,” Smith said. “So, I see it being the same thing, and hopefully bringing in a greater number and a greater variety of people, too. But hopefully, we will throw an even bigger party.”