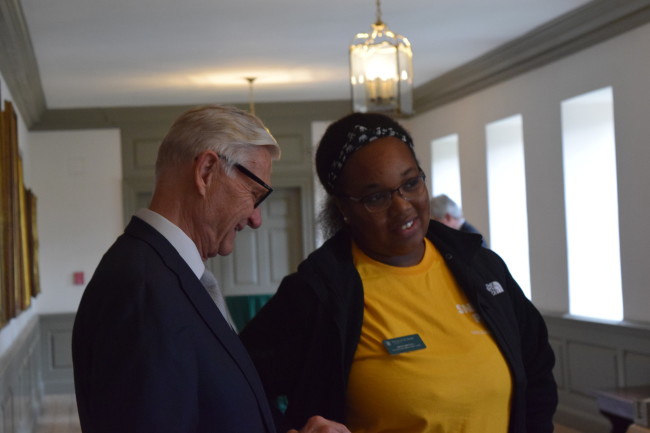 April 7, 2017, College of William and Mary President Taylor Reveley announced that he would retire after a decade of serving as the College’s president. At an event filled with members of the Board of Visitors and the College’s Vice Presidents, he set his retirement date for June 30, 2018.

According to Reveley, this decision was made based off of one factor — his age. Next June, he will be 75-and-a-half.

Summarizing his accomplishments as president, Rector Todd Stottlemyer ’85 said that Reveley’s initiative, For the Bold, the College’s billion-dollar fundraising campaign, is one of the most notable.

“Every aspect of the university has advanced under Taylor’s leadership,” Stottlemyer said in a press statement. “Today our finances are stronger thanks to the William & Mary Promise, our curriculum more versatile, our facilities ready to carry us into the 21st century and our community increasingly diverse and united in a shared pride in William & Mary. From behind-the-scenes organizational changes to major public initiatives, Taylor has proven to be an outstanding leader, the ideal person for this chapter of William & Mary’s history.”

This fundraising capability is what Student Assembly Vice President Hannah McKiernan ’17 said would be most missed when Reveley retires.

I think something we’re really going to miss about President Reveley is his immense leadership and his presence on campus, he has a really great presence and personality,” McKiernan said.

“I think something we’re really going to miss about President Reveley is his immense leadership and his presence on campus, he has a really great presence and personality,” McKiernan said. “What William and Mary as an institution is going to miss the most is his ability to reach out to people he doesn’t know and get them to give to what they’re passionate about. He is amazing at fundraising. He is passionate about helping students and student scholarships, and I think we’re going to miss that a lot.”

In the Christopher Wren Building’s Great Hall, Stottlemyer noted Reveley’s accomplishments, which beyond fundraising, include expansions to the campus such as the Integrated Science Center, One Tribe Place, Richmond Hall and the College’s School of Education. Stottlemyer also mentioned two personality flaws — Reveley’s penchant for not drinking enough water and his love for his own alma mater, Princeton University. However, Reveley said that he will now be a member of the “Tribe” forever.

When Reveley stepped into the Brafferton as the College’s president in February 2008, he was leaving a decade-long career as the dean at the Marshall-Wythe School of Law. He was named interim president when the College’s 26th president, Gene Nichol, resigned after his decision to move the altar cross from the Wren Chapel, which angered some donors and state legislators. In the months between February and September, when he was formally named the 27th president, he said that it was his ability to build connections that helped restore faith in the College.

“I built connections with alumni and students,” Reveley said. “The William and Mary community came back quickly, there was a real resilience in the community. It was also, in a way, getting us out of the media. It was a very difficult time.”

Now, Reveley said it is “extraordinarily wonderful” that students and alumni have chosen him as the subject of memes and otherwise positive attention.

“It is extraordinarily wonderful for me,” Reveley said. “There are quite exceptional people here who are also quite nice, which is not always the case with very able people. I think that trait is also shared with students at the law school.”

After nearly 10 years in office, Reveley said that he has accomplished more than he expected to coming in, and that he has truly helped the College make strides in becoming excellent in all ways. While he cites his ability to communicate well with donors and students as part of his success, he said he is most proud of his work that brought the College into modern times.

“I do genuinely feel like I’ve helped this magnificent and iconic institution do what it needs to do to move forward,” Reveley said. “There’s also more pride among students now than when I started. I think there has always been a love and respect for William and Mary, but sometimes that love and respect has been quiet. This job would be hard to do if you didn’t think it mattered.”

For Reveley, one of the challenges that accompanied this journey of modernizing the College came from social media. He said that students’ use of the internet and social media has called him and other administrators to be more immediately responsive.

“Social media brings to campus an immediacy and a force,” Reveley said. “When things happen elsewhere, it feels almost as if they had happened on campus. This created a need to be more responsive, more quickly, when it comes to mental illness, sexual harassment, race relations, sustainability and disability. That’s not going to change.”

While he has 14 months left until his retirement is official, Reveley said that there is still much he hopes to accomplish. Mainly, he said he wishes to continue pushing current initiatives forward to ensure that the transition of the 28th president is “seamless.”

While he has joked about running for public office, Reveley said that most likely won’t be on his agenda. However, he said that after he spends a couple of weeks taking time to read newspapers and books, he’d like to sort through his papers and potentially continue studying war powers — his academic interest.

I loved being president most days, but I think I’ll also love being retired and I’ll figure out what it is that I would like to do,” Reveley said.

“I loved being president most days, but I think I’ll also love being retired and I’ll figure out what it is that I would like to do,” Reveley said.

Looking forward, the Board of Visitors plan to announce appointments to a presidential search committee next week to select the 28th president of the College.