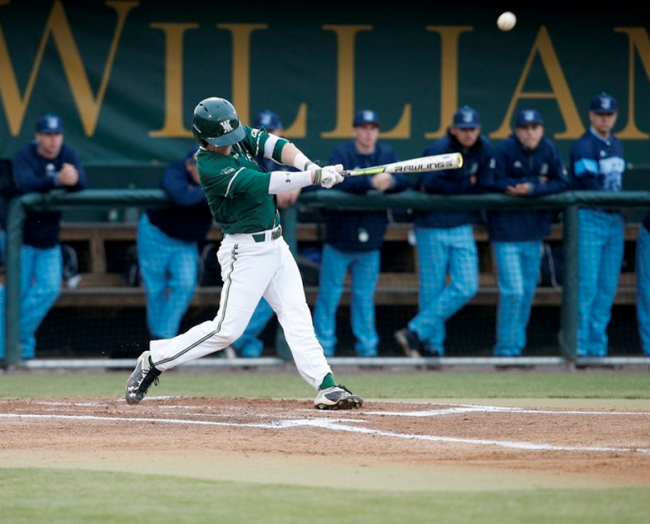 William and Mary had another busy week on the diamond. Tuesday, the Tribe traveled to Richmond for an in-state matchup against Virginia Commonwealth. Despite struggling at the plate in the first few innings, the College’s offense came to life to secure a 5-1 win over the Rams. For its weekend series, the College looked to build on its victory over the Rams when it took on Elon in a three-game series at Plumeri Park. The Tribe won two of the three games to pick up its first series win in conference play.

“I think that we had an okay week, and hopefully that will give us some confidence going forward,” head coach Brian Murphy said about the team’s ability to bounce back after a tough series against Delaware the previous week.

Tuesday, the College (16-13) squared off against the Rams (16-13). Senior pitcher Chase Bailey started on the mound for the Tribe, while Jonathan Ebersole was slotted for the start for the Rams.

Bailey gave up an early run in the bottom of the first inning, and the Rams took an early 1-0 advantage. Center fielder Logan Farrar ripped a one-out double to put himself in scoring position for the Rams. Rams left fielder Alex Gransback followed up Farrar’s base hit with an infield single, advancing Farrar to third base on the play. Gransback was later caught attempting to steal second base; however, Farrar was able to scamper home for the first run of the game on the throw to second.

In big spots, I was just trying to put the ball in play and hit it hard somewhere,” Ameer said.

The College was unable to answer the Rams until the top of the fourth inning. The Tribe exploded for four runs in order to grab a 4-1 lead that it would not relinquish for the rest of the contest. After three straight singles to start the fourth inning, senior center fielder Charles Ameer stepped to the plate for the Tribe. Ameer blasted a three-RBI triple into left center field, clearing the bases and giving the Tribe its first lead of the day at 3-1. Two batters later, sophomore shortstop Kyle Wrighte collected an RBI with a double to left center field, scoring Ameer and extending the College’s lead to 4-1. The Tribe ended up stranding three men on base at the end of the inning and went to the bottom of the fourth inning still leading by three. The College tacked on one more run in the top of the eighth inning and prevented the Rams from scoring any more runs in order to secure the 5-1 victory.

“In big spots, I was just trying to put the ball in play and hit it hard somewhere,” Ameer said on his approach that led to success at the plate in the game against the Rams.

The Tribe (18-14, 4-5 CAA) returned to action Friday evening for a Colonial Athletic Association showdown against Elon (15-16, 5-3 CAA), hoping to build upon the victory over Virginia Commonwealth. Senior pitcher Daniel Powers started the game on the mound for the Tribe while pitcher Ryan Conroy toed the rubber for the Phoenix.

The College jumped out to an early lead with a run in the first inning and five in the third inning. In the first inning, Ameer continued his success at the plate by picking up an RBI with a bases-loaded single that plated freshman Brandon Raquet to put the Tribe on top 1-0.

The Tribe blew the game open with a huge third inning at the plate. Junior right fielder Ryan Hall started the inning by reaching base on an error and eventually scored on a double down the right field line by junior second baseman Cullen Large. After both Brandon Raquet and Large crossed the plate to stretch the lead to 4-0, freshman first baseman Matthew Trehub stepped to the plate with two men on base and two outs. He also ripped a double down the right field line, a two-RBI double which pushed the lead to 6-0.

“I was seeing the ball deep, letting my hands work a little bit, and do some damage,” Trehub said.

The Phoenix clawed back with two runs in the top of the fourth inning but were never able to get closer than that 6-2 deficit. The Tribe held Elon scoreless for the remainder of the game, adding two runs of its own in the bottom of the eighth inning on a two-RBI double by sophomore third baseman Zach Pearson. The Tribe shut down the Phoenix in the ninth inning for an 8-2 victory.

Saturday, game two of the weekend series commenced. The College jumped out to an early 3-0 advantage, with two runs in the first inning and one in the third. Despite the early lead, Elon bounced back to tie the game in the top of the fourth, aided by a two-RBI triple off the bat of designated hitter Will Nance. The Phoenix took their first lead in the top of the sixth inning, when they scored three more runs to put them ahead 6-3. Elon was helped by a defensive error on sophomore catcher Hunter Smith. Nonetheless, in the bottom of the sixth, the College evened the game once again with three runs of its own. Brandon Raquet had an RBI triple in the inning to help the Tribe tie the game.

I was seeing the ball deep, letting my hands work a little bit, and do some damage,” Trehub said.

With the game tied 6-6 in the bottom of the sixth, the College had an offensive explosion in the form of an eight-run inning, taking an eight-point lead, 14-6. The Tribe scored all eight runs without a home run and had seven hits in the inning, including doubles by Wrighte and Brandon Raquet. Elon was unable to cut into the lead at all for the rest of the game, and the Tribe emerged victorious from the back-and-forth game.

Sunday, the Tribe wrapped up the weekend series with a 5-1 loss. The Phoenix struck first with one run in the top of the third inning. After a single and a wild pitch, designated hitter Garrett Stonehouse scored on an RBI single up the middle by shortstop Ryne Ogren. The College was able to get out of the inning without giving up any more runs.

The Tribe rallied in the bottom of the fifth inning, evening the score at 1-1. Trehub led off the inning with a solo shot to right field that just cleared the fence. The Phoenix scored next in the seventh inning. Right fielder Kyle Jackson was able to scamper home on a safety squeeze by third baseman Cam Devanney. Nance added an insurance run for the Phoenix when he dashed home on a wild pitch by senior pitcher Nick Brown to extend the lead to 3-1. Elon added four more runs in the bottom of the eighth to make the score 7-1. The Tribe got back five runs in the bottom of the ninth, including a three-run home run with two outs by Hall, but still fell 7-6.

It doesn’t matter whether we are playing at home or on the road; it’s a chance to get better,” Murphy said.

The College will look to start another winning streak when it goes on the road for five straight days this week. Tuesday and Wednesday, the Tribe will take on Old Dominion and Norfolk State. This will be the College’s second matchup against each team, having fallen to the Monarchs 11-6 and beaten Norfolk State 6-1 at home earlier this season. The Tribe will then travel to East Tennessee State for a three-game set from Thursday to Saturday.

“We have to keep getting better,” Murphy said. “We have things we need to work on. It doesn’t matter whether we are playing at home or on the road; it’s a chance to get better.”