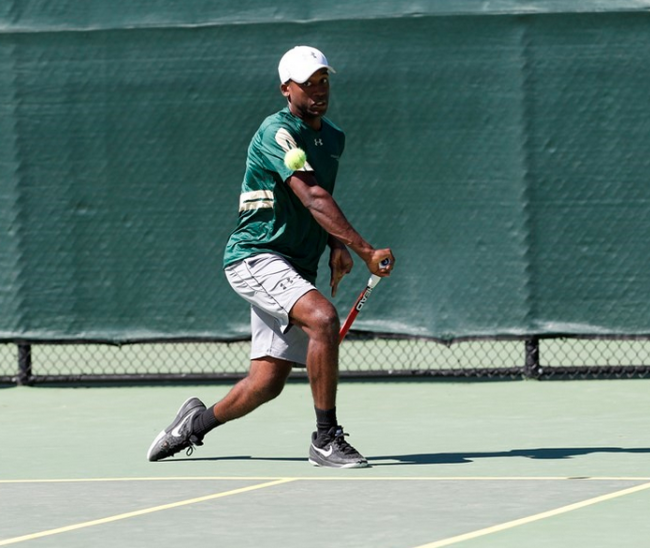 Wednesday, the William and Mary men welcomed Virginia Commonwealth (11-11) to the Millie West Tennis Facility. The Tribe (9-11) fell just shy of victory, losing 4-3 to the Rams.

The College had a rough start, losing the doubles point to the Rams. Senior Addison Appleby and sophomore Tristan Bautil fell 6-2 at the No. 1 spot and junior Christian Cargill and senior Damon Niquet were crushed 6-1 at the No. 2 spot. Junior Lars de Boer and senior Aidan Talcott’s match at the No. 3 spot went unfinished.

“When you lose [a doubles match], the momentum is really switched into the opponent’s side,” Cargill said. “It’s tough to get it going, but it’s just one of those things you have to do and look at it as only one point out of four.”

Talcott earned the first point for the Tribe, defeating Rams opponent Daryl Monfils 7-6 (5), 6-0; however, his win at the No. 1 spot was not enough for the College. The Tribe suffered losses at the No. 5, 3 and 6 spots, calling the match in favor of VCU. Despite the team loss, Cargill and junior Alec Miller posted singles victories for the College. Cargill defeated Rams foe Marten Jonsson in a long-winded third set 2-6, 7-6 (4), 10-7 at the No. 2 spot.

“I think everyone has improved a lot on the quality of the tennis,” de Boer said. “I think we can definitely pull that [confidence] through to CAAs, and I think we should have a really good chance. I think we can make it a good tournament.”

I think everyone has improved a lot on the quality of the tennis.”

Sunday, the Tribe played its final match before the Colonial Athletic Association Championship. For its Senior Day, the Tribe hosted Old Dominion, dropping a close contest 4-3 for its third loss in a row. This was the seventh time in 10 years that the Tribe-Monarch matchup was decided by this scoreline.

“I thought it was definitely better than the last match,” head coach Jeff Kader said. “Our last few matches here definitely prepared us for conference.”

All three of the doubles matches were decided 6-4. Despite Cargill and senior Ryan Newman’s victory at the No. 1 spot, ODU stole the doubles point with wins at the No. 3 and No. 2 spots.

The Tribe did not gain the momentum it needed to overpower the Monarchs. The College fell at the No. 1, 3 and 4 spots, handing the win to ODU 4-0.

Our last few matches here definitely prepared us for conference.”

The Tribe will head to the Jimmy Powell Tennis Center in Elon, N.C., April 21-23 for the 2017 CAA Championship. The men won their last conference contest in 2015.

“If we can all show up, compete, have the good team spirit, that good team energy, for three straight days down there then I think we’ll be in good shape,” Kader said. “Whatever the results are from there, I’m fine with, but if we can bring that, that’s what I’m looking for.”