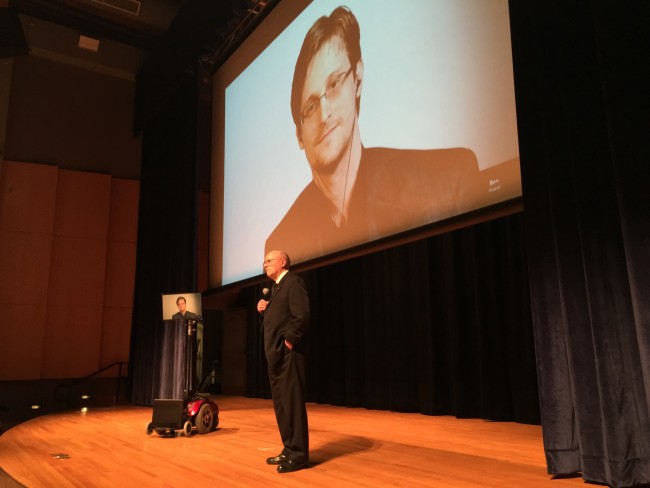 The City of Williamsburg may be a town known for its colonial past, but yesterday it took a leap into a contemporary issue: cybersecurity. Edward Snowden, the former Central Intelligence Agency employee known for leaking classified information from the National Security Agency in 2013, spoke remotely to a group gathered yesterday in Commonwealth Auditorium at the College of William and Mary on the importance of the balance of privacy and security in the contemporary world.

The call-in, titled “Democracy Under Surveillance: A Conversation with Edward Snowden,” was moderated by government professor Lawrence Wilkerson, a retired United States Army Colonel and former chief of staff to U.S. Secretary of State Colin Powell. Wilkerson and Snowden have both been recognized by the Sam Adams award, presented by a group of former CIA members, which recognizes members of the intelligence community who have taken a stand for integrity and ethics.

Student Assembly did not vote on this issue because of problems raised on the senate floor, but since the event was announced, Higgins, who took the lead in organizing it, said that the response has been overwhelmingly positive.

One of the media council’s missions is to facilitate conversation about media ethics and ethical issues that arise after publication,” Higgins said.

“One of the media council’s missions is to facilitate conversation about media ethics and ethical issues that arise after publication,” Higgins said.

To support that mission, the Media Council reached out to the Freedom of the Press Foundation early this year to look into getting Snowden, who regularly speaks remotely at institutions of higher education, to speak to the College on issues that intersect between citizenship and media.

Even though Snowden is a polarizing public figure, many in attendance said they consider his actions heroic. Second year public policy graduate student Aaron Albrecht said he had high praise for Snowden.

“I would say Ed Snowden is a hero,” Albrecht said.

In addition to praising Snowden, Albrecht said it was important to promote discussion in a public forum.

“What we’re doing right here is in effect a form of dissent,” Albrecht said. “By bringing this issue to light and by having this discussion with professor Wilkerson and bringing Snowden who is a political refugee, to this campus, we’re exercising political discussion and political dissent. And that is the lifeblood of democracy, and that’s why I think this is so important.”

Wilkerson kicked off the discussion by asking Snowden — who appeared to the audience as a floating head on a screen at the top of a remote control robot — if he saw any parallels between his own actions and citizens seen as traitors in the past, such as the revolutionaries of the American revolution, who have since been redeemed by history as morally justified in their actions.

“We’re going to be talking about surveillance in our lives,” Snowden said. “This means we’re going to be talking about power. Why? Because people are only interested in communications, surveillance, watching people, for the utility that it provides, they don’t do it for its own sake. Outside academia, there are not many people looking for information for information’s sake.”

Snowden described the mass metadata collection operation conducted by the NSA and how he believed this represented a “mass violation” of privacy, especially compared to the level of government surveillance in past generations.

“This is not science fiction,” Snowden said. “This is happening now.”

Snowden also warned that governments can be well intentioned yet still make mistakes.

“Good people can very easily do bad things for what they believe are good reasons,” Snowden said. “And this is what is happening today.”

Snowden then explored the question of who to turn to when the government’s checks and balances fail its citizens. To Snowden, the answer lies in the First Amendment.

“What do we do when the ordinary system of oversight breaks down?” Snowden said. “What happens when even the most well-designed systems of checks and balances fail us? I argue this is where we’re forced to rely on democracy’s safeguard and last resort, the Fourth Estate.”

Snowden said that the ability of investigative journalists to operate free of interference is coming under threat in the contemporary world, and that this “intellectual darkness” is a dangerous thing.

“If we only knew what governments wanted us to know, we wouldn’t know very much at all,” Snowden said.

Snowden said that the idea that morality has taken a backseat to lawfulness is a dangerous one and that in certain situations, breaking the law is the only moral thing to do.

I’m here to say tonight that the support of a majority can never transform a wrong into a right, and that dispossessing a minority of basic liberties, or perhaps an entire population of their privacy does not become permissible even if it is popular,” Snowden said.

“I’m here to say tonight that the support of a majority can never transform a wrong into a right, and that dispossessing a minority of basic liberties, or perhaps an entire population of their privacy does not become permissible even if it is popular,” Snowden said. “What this means ladies and gentlemen … is that sometimes the only moral choice is to break the law. And while we face challenges, you all know better than I whose hand rests on the lever of Congress today.”

Snowden ended the prepared portion of his remarks by tying the conversation back to more universal themes.

Snowden then took questions from the Black Law School Student Association on the role of whistleblowers in opposition parties and from the president of the Student Veterans Group on the ethical responsibility whistleblowers and investigate journalists have to currently deployed troops who may be directly endangered by information leaks.

Snowden concluded his remarks with a call to action.

“I would not encourage anybody to come forward if they didn’t think it could make a difference,” Snowden said. “ But there are cases where it can. And when you see something wrong, and you think the world should be better, you think the program could be better, you think the program is supposed to be better, you think it is against the law for things to be occurring as they are, or even if it’s not illegal it’s clearly immoral, as so many institutions throughout history have been, do you have an obligation to resist it? You have a voice, ladies and gentlemen, and that voice matters. It is not enough to believe in something. If you want to see a better world you have to make it. Don’t believe in something. Stand for something. Use your voice. Good luck.”

With those words, the screen of Commonwealth Auditorium turned black again and the packed audience filtered out.

“I don’t think [Snowden] is important,” Wilkerson said. “ I really don’t. I hate to say that about any human being, but I don’t think he’s that important. I think the issues he’s surfaced by the actions he’s performed, whatever we may think about them, are critical to our democracy. If we don’t debate them and we don’t discuss them, then foo on us. We deserve to lose it.”

Editor’s Note: The Flat Hat would like to clarify that Tucker Higgins ’17 is a former Editor-in-Chief of the paper. His involvement with the planning of the Democracy Under Surveillance event is not on behalf of the paper’s interests.