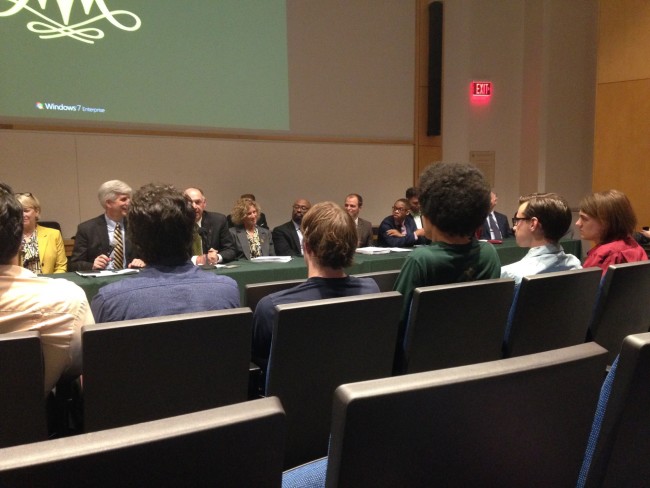 April 19, members of the College of William and Mary’s Board of Visitors and the Presidential Search Committee held three different “listening sessions” to hear from staff, faculty and students on what the community desires for the next College president. In all three, diversity and inclusion were topics broached again and again.

Current College President Taylor Reveley announced on April 7 that he will retire June 30, 2018. In the meantime, the Search Committee and the BOV will embark on their presidential search following a timeline that Vice Rector and Search Committee Chair Tom Watkins ’74 laid out at the beginning of each of the three forums.

According to Watkins, the “listening phase” the committee is currently involved in — holding forums, soliciting feedback through the committee website — will last through the late summer. Recruiting and interviewing candidates will take place through the fall, likely with the help of an outside search consultant, Watkins said. The committee hopes to recommend two or three finalists to the BOV in February, which aims to make a final selection with a few months still left in Reveley’s presidency.

There is nothing more important for a board of visitors than ensuring the selection of a new president … and ensuring a president that is as capable and strong and terrific as the president we’ve had for the past 10 years,” Watkins said.

“There is nothing more important for a board of visitors than ensuring the selection of a new president … and ensuring a president that is as capable and strong and terrific as the president we’ve had for the past 10 years,” Watkins said.

At the beginning of all three forums, Watkins asked those in attendance to consider three different things when they took the microphone to make a point: what qualities they thought the next president should have, what they saw as the most important issues the College will face in the coming years and what they saw as aspirational goals the College should seek to achieve.

Although staff, faculty and students all presented a wide range of concerns, suggestions and input, all three of the forums had a significant discussion of diversity and inclusion.

Assistant Director of Diversity Sharron Gatling spoke at the staff forum, the first of the three sessions.

“It is very important that the search committee establish criteria that we can really measure in what a potential president has done … to see concrete evidence of what they have done to push diversity and inclusion forward,” Gatling said.

Gatling suggested the search committee consider conducting scenario-based interviewing, in which they would put forth a potential scenario that the future president might encounter and see how the candidate would respond.

Similarly, Vice President for Student Affairs Ginger Ambler ’88 Ph.D. ’06 said that the next president must have “prescience” and foresight.

“We need a president who can anticipate what kind of issues might be coming towards us,” Ambler said.

Ambler also emphasized the importance of flexibility and willingness to learn in the next president.

“It’s so important to have a president with a learning posture,” Ambler said. “We’re too complex an enterprise for anyone to come in knowing everything they need to know.”

Other staff members spoke about being cognizant of the political climate and how it affects students, as well as understanding the College as a unique campus and being able to adapt to the specific needs of the student body and campus community.

Associate Director of the Center for Student Diversity Roxie Patton emphasized the importance of a president who truly understands what it means to be a diverse and inclusive institution.

“We need someone who understands diversity as more than a buzzword … and what it means to be a diverse student at the College of William and Mary,” Patton said.

According to Patton, what it means to be a “diverse student” is different at every institution and it is important that the College’s next president take that into account and adapt their approach to diversity and inclusion to the needs of the College specifically.

Diversity was a prominent topic of discussion at the faculty forum as well, which was held later Wednesday afternoon.

American studies and history professor Leisa Meyer spoke about the importance of having a diverse faculty in addition to working toward a more diverse student body.

“Our next president [needs] to be someone who not just plans for diversity but acts on diversity in the broadest sense in terms of faculty, student body, our curriculum, transnationally, internationally as well in terms of underrepresented, minoritized faculty,” Meyer said. “Our representation is really quite abysmal.”

Meyer said that the next president should not just be someone who is willing to learn about diversity and inclusion, but someone who is already knowledgeable and is able to add to the conversation.

She alluded to Reveley’s meeting with Black Lives Matter organizers and the backlash that came from him saying “I don’t deal in demands.”

“It needs to be someone who is knowledgeable about these issues, in terms of the importance of them and the strengths that this kind of diversification brings to the college and university, and be familiar with, be able to speak about diversity in a way that clarifies that knowledge, that indicates that there’s an understanding and thus perhaps avoids some of the missteps that we’ve seen recently,” Meyer said. “I don’t think we’ve had that … since Gene Nichol.”

In a similar vein, history and Africana studies professor Robert Vinson spoke about the way students of color at the College feel and how, in his experience, many struggle to find the sense of belonging that the College promotes through the idea of “one Tribe, one family.”

“Quite often students of color, particularly, don’t feel included when they’re here, and it’s really disheartening to have students come regularly to my office feeling that they’re not really a part of the campus, that this is not really home,” Vinson said. “We need a president who looks at diversity, and inclusion and equity as not necessarily oppositional to academic excellence but actually enhances academic excellence.”

Vinson’s message about the dissatisfaction of students of color was echoed at the student forum later that night.

“We at Black Lives Matter and myself, we want to see a president who will understand the grievances of the students that come to whoever that person may be,” Dendy said.

Dendy said that, for her, it is important that the College’s next president focus on directly addressing student concerns, especially concerns of students of color and other marginalized populations.

Nadia Ross ’17 said that it is important for the next president to truly value diversity and not just looking to check a box. She said that this involves paying attention to retention efforts in addition to recruitment efforts for diverse students and faculty.

According to Becca Merriman-Goldring ’19, the search committee should be thinking about the ways the College and the student body may change in the long-term while they interview candidates.

“I’m concerned not only with next year but with what comes after that,” Merriman-Goldring said. “Presidents at this college tend to be at this college for a long time so I want a president who will not only be receptive to the students concerns immediately after arriving, but will still be someone who’s willing to change and grow with the student body as the students change over the course of 10 years … we need a president who will continue to remain in touch with where students are as that changes over time.”

To close out the student forum, after listening to discussion on diversity and inclusion, Watkins made a point to state that the search committee plans to ensure a selection of a diverse pool of candidates.

“It will be a diverse pool in every respect,” Watkins said. “Diversity is a part of everyone’s life, in this community and in the world we live in … I want to make sure you know that diversity in our minds means every form of diversity, not just gender and race … but diversity of thought, diversity of background.”

However, Merriman-Goldring said in response to Watkins’ statement that the search committee’s promise for a diverse pool of candidates is, for her, not enough because only one candidate from that pool will be selected.
“All due respect, while I really appreciate your commitment to making sure the pool is diverse and that there are lots of different genders and ethnicities and schools of thought represented, that doesn’t matter that much because only one person is going to be selected as president of this college,” Merriman-Goldring said. “But having lots of black candidates or lots of female candidates, while it does indicate that the school is moving in a good direction, doesn’t necessarily mean that much if we’re still going to end up with a white man who is coming from a rich, highly educated, able-bodied, cisgender, heterosexual background.”

Watkins then said that having a diverse selection pool is important and said that the most important thing in the selection process is for the Board of Visitors to select the most qualified candidate as the College’s next president.

“When the Board of Visitors selects the next president, they will want to select the best candidate and a pool that reflects the diversity commitment that I am describing is a necessity,” Watkins said. “You don’t have diversity of selection if you don’t begin with diversity of choice and diversity of choice must include really good candidates that happen to be diverse, that are not candidates because they’re diverse. … And so our job as a search committee will be to ensure that we will offer and have and find candidates that are excellent and many of which happen to be diverse. … There are white males out there that are just as effective … as diverse people.”

All three of the forums were video recorded so that the committee can refer back to the comments and feedback they received as they proceed with the presidential search. The search committee will meet for the first time on Friday, April 21, wrapping up this week’s BOV session.