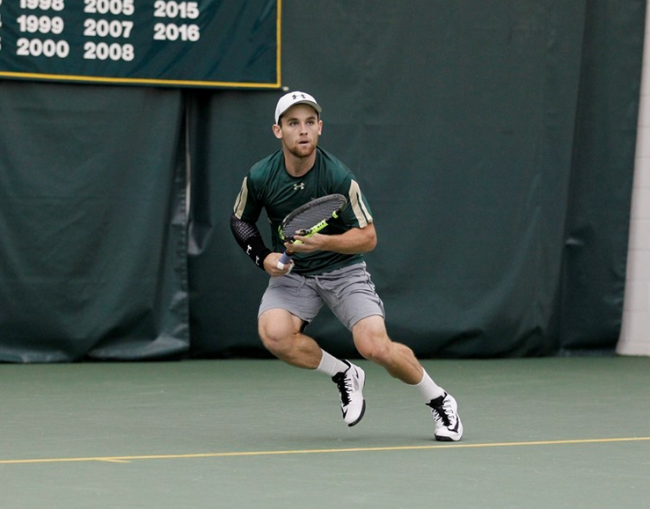 This weekend, the William and Mary men began Colonial Athletic Association Championship play. Friday, the Tribe slayed the Drexel Dragons 4-0 in the quarterfinals. Saturday, the College upset Elon in a 4-1 semifinals victory. Despite its resilient start in the championship, the Tribe ultimately fell to UNC-Wilmington 4-2 in the CAA Championship matchup.

Friday, the Tribe hit the court hot with a 4-0 shutout against Drexel. The College took an early 1-0 lead with the doubles point. Senior Addison Appleby and junior Lars de Boer kick-started the contest with a 6-2 victory over Balaji Lakshmanan and Daniil Ginzburg at the No. 3 spot. Sophomore Tristan Bautil and senior Aidan Talcott followed suit in the No. 2 spot with another 6-2 triumph over Dragon opponents Hamza Laalej and Kashyap Ashok. Junior Christian Cargill and junior Ryan Newman’s match at the No. 1 spot went unfinished.

The Tribe stayed relentless going into singles play. Cargill handed out the first Drexel defeat to opponent Lakshmanan, 6-0, 6-2, at the No. 2 spot. Talcott soon followed at the No. 1 spot, defeating Laalej 6-1 both sets. This marked Talcott’s fifth win in the past six matches and advanced his season record to 15-10 overall and 11-7 at the No.1 spot. Senior Damon Niquet’s win 6-1, 6-2 win over Dragon opponent Ginzburg ended semifinals play and secured advancement for the Tribe.

Appleby, junior Alec Miller and de Boer’s matches at the No. 3, 4 and 6 spots, respectively, went unfinished.

Saturday, The College faced off against Elon. The Tribe started off strong, securing the doubles point and, again, sporting an early 1-0 lead. Cargill and Newman defeated Elon duo Mario Paccini and Petar Tomic 6-2 at the No. 1 spot. Bautil and Talcott dropped the contest 6-3 at the No. 2 spot, but the Tribe came back with a 7-5 victory at the No. 3 spot by de Boer and Appleby to secure the doubles point.

The College started strong in singles play with Talcott defeating Felipe Sarrasague 6-2, 6-0 at the No. 1 spot. Elon followed up with a win at the No. 3 spot by Salvador Mijares over Appleby 6-2, 6-3. This would be the Phoenix only point of the semifinals. Miller answered with a 6-3, 6-2 triumph over Elon’s Tomic at the No. 4 spot, putting the Tribe up 3-1.

De Boer finished off the matchup with a 6-4, 6-2 win over Jacob Bicknell, improving his record to 6-2 at the No. 6 spot. This was de Boer’s fifth win in the past six matches. Cargill and Niquet’s matches at the No. 2 and 5 spots, respectively, went unfinished.
Sunday, the Tribe rallied against UNC-Wilmington, but fell 4-2 in the CAA Championship. This was the College’s 11th time in the championship and second time in the past three years.

The College gave up its early lead for the first time in this year’s CAA Championship play. Cargill and Newman defeated Agustin Savarino and Ignasi de Ruea 7-5 at the No. 1 spot, but the Tribe fell to the Seahawks at the No. 2 and 3.

The Tribe tied the match up 1-1 with Talcott’s 6-0, 6-1 victory over Andres Torres at the No. 1 spot. After being defeated in doubles, UNC-Wilmington’s de Ruea came back and defeated Appleby 6-3, 6-2 at the No. 3 spot. The College responded with Miller defeating Raphael Calzi 7-5, 6-4 at the No. 4 spot to tie the contest back up at 2-2. Miller’s point would be the Tribe’s final point in the championship. Seahawk Michael Copeland defeated de Boer 3-6, 6-4, 6-2 in a tight third set at the No. 4 spot. UNC-Wilmington’s Savarino, who also lost in doubles play, came back and defeated Cargill 2-6, 7-5, 6-1 in another close third set at the No. 2 spot. Niquet’s match at the No. 5 spot went unfinished as UNC-Wilmington took the CAA title.