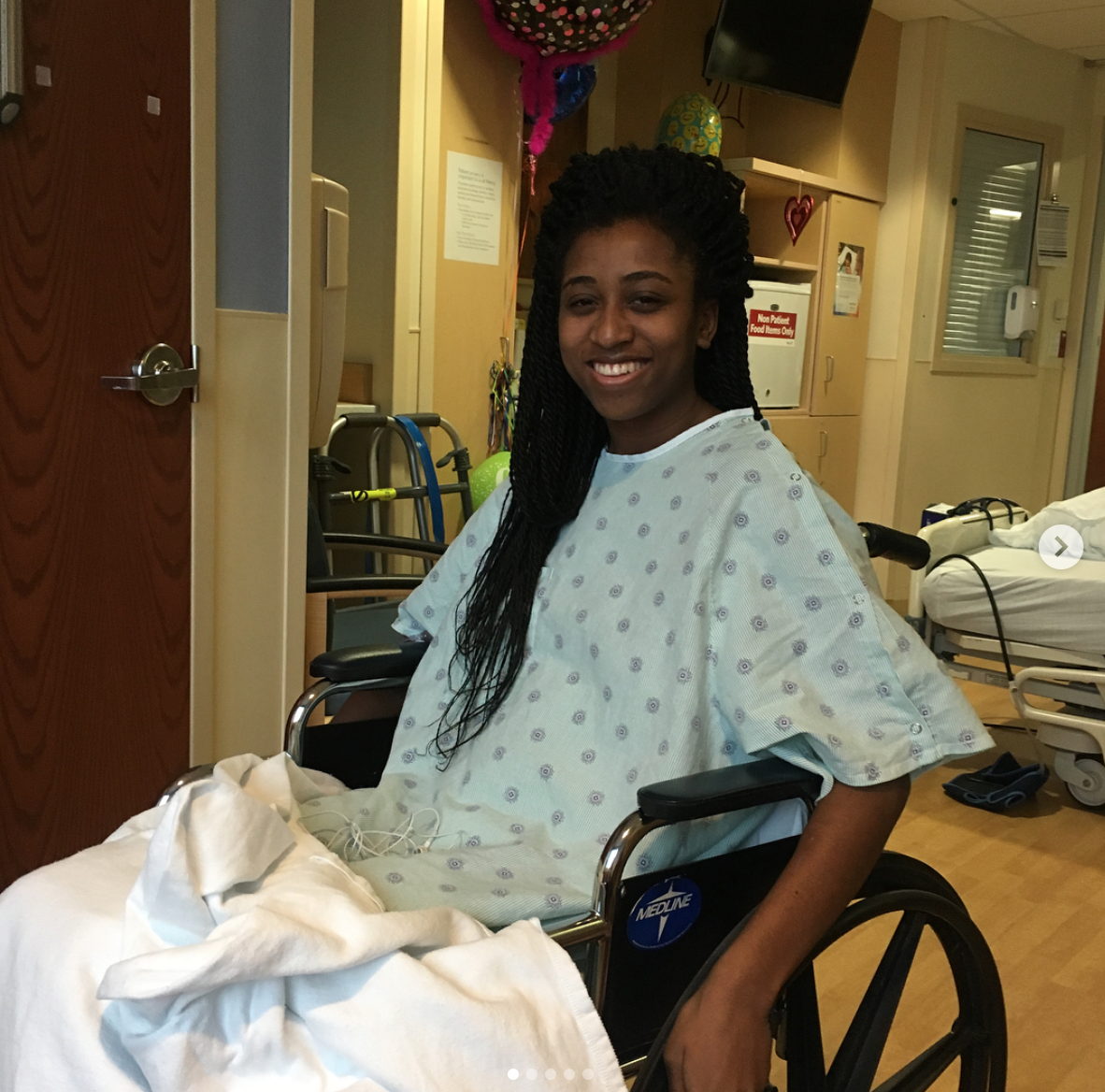 Jan. 7, 2017, Alexandria Pete ’20 woke up on a slice of asphalt, looking into the eyes of a woman giving her CPR. After being hit by a drunk driver on the way home from the gas station, Pete wavered in and out of consciousness for a few minutes before saying a quick Hail Mary and passing out, leaving herself to be saved by medical professionals at Mercy Hospital in St. Louis, Mo.

“My leg was in one of the front windows and I saw my leg bleeding and I saw a big cut across my leg and I said OK, so something happened, and I knocked back out,” Pete said. “The next thing I remember is waking up two days later in my hospital bed in the intensive care unit and a doctor came in and explained what happened. I had a really bad enclosed head injury, I had three broken ribs which was from the CPR, I had a busted lip, a broken nose and the ability to not walk. I was completely paralyzed at that time from both legs down.”

After spending 12 days in the ICU, Pete was moved to a normal recovery unit and put into rehab for a little over a week. She has been doing physical therapy ever since and gradually regained use of her left leg after she returned to the College of William and Mary in late February.

“I had gotten the ability to use my left leg but not my right leg because I had damaged femur nerves [and] a dislocated hip and I came back to school in a wheelchair which was really rough,” Pete said. “I definitely started to think how lucky people are to have the ability to use their legs. When I wake up in the morning I’m like ‘wow I can stand on both two feet and walk around.’”

I definitely started to think how lucky people are to have the ability to use their legs. When I wake up in the morning I’m like ‘wow I can stand on both two feet and walk around.’

Returning to campus was not a move everyone in her life advised, but Pete’s professors were accommodating and she came to be known as ‘Catch-Up Pete.’ She returned to a course load of 17 credits, intending to major in biology. She said professors Margaret Saha, Paul Heideman and Mark Forsyth were three of her biggest sources of support and allowed her to turn in work as she completed it.

Pete is a member of Delta Gamma and said her sorority sisters were also a major source of support.

Having entered the College intending to major in biology, Pete briefly considered a switch to English, but charged ahead with her dream to attain an M.D. and become an OBGYN.

“I hope to get a Ph.D. in Maternal and Child Health and my M.D. and become an OBGYN,” Pete said. “The goal is to go abroad with being an OBGYN because I’m a big advocate for women’s health and [I’m] pro-choice so I would like to go abroad and help women in third world countries. I’m learning a lot of different languages like Spanish and I already know French so I could go to places like Haiti and Ecuador and places that may be poorer.”

You can move your hands, you can go to the gym if you want, you can get up and walk to class, you can write with a pencil. For everything, there’s a person that struggles to do that.

In spite of all the setbacks, Pete finished the semester as a member of the National Honor Fraternity Phi Sigma Pi and earned herself a place on the Dean’s List. Despite returning to campus so late and taking all of her final exams on the last possible day, Pete is on track to graduate with the class of 2020 with degrees in both biology and environmental science.

Pete also started work last semester on her independent research project in psychology and is currently working to obtain funding for her proposal.

“I’m doing psychology or neuroscience so basically how police brutality affects people in different races and how it’s perceived depending on the race and sensitivity factors,” Pete said.

Making her way from a hospital bed in Missouri to classrooms in Williamsburg was not an easy journey. Professors, friends and sorority sisters were there to help Pete along the way, but coming back with such little mobility was intimidating.

“They told me you can’t do this, you can’t do this,” Pete said. “I did it and I did it by myself. Like walking — I’d get up every day even though I’d fall down in my dorm. I’d try to get back up and I had a nurse for the first three weeks I came back to school to help me shower and get dressed, then started occupational therapy so I was able to do all that by myself more and more every week so I just have the mindset like, ‘Hey, this really sucks and I don’t want my life to be like this forever.’”

The adversities she faced led her to acknowledge the mobility she had previously taken for granted. She came to appreciate life in a new way and hopes to share that appreciation with others.

“Definitely be grateful just for the really small things, like especially physical things that you can do,” Pete said. “You can move your hands, you can go to the gym if you want, you can get up and walk to class, you can write with a pencil. For everything, there’s a person that struggles to do that. Definitely think about things that are small — the small things that contribute to the big picture of yourself.”