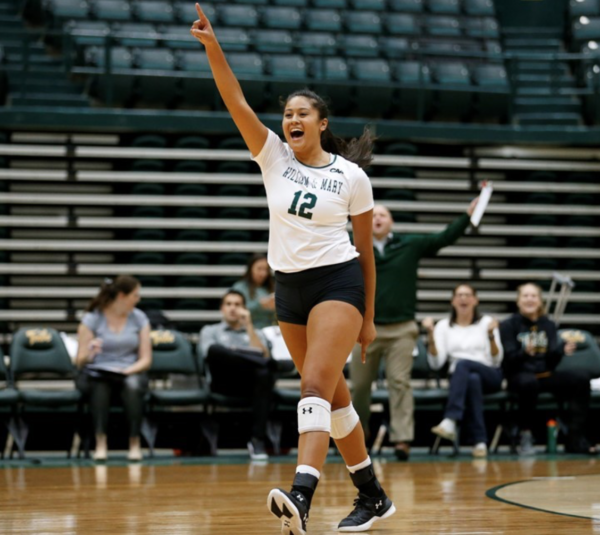 This weekend, William and Mary traveled to Winston-Salem, N.C., to compete in the Wake Forest Invitational. The College went up against Wake Forest (5-2), the University of Maryland Eastern Shore (7-2) and USC Upstate (3-7). Friday, the Tribe (2-8) fell to the Demon Deacons 3-1, losing three straight sets after winning an intense first set 26-24. Despite its efforts, the College dropped the final three sets 25-21 each. Saturday, the Tribe again lost to the Hawks without a single set victory. The invitational concluded Saturday evening with another loss, 3-2 in favor of the Spartans.

The Tribe started off strong, taking an early lead with a kill by senior hitter Sydney Biniak off an assist by sophomore setter Autumn Brenner. The score gap was never greater than four points, which only happened once, with the Demon Deacons up 13-9. A kill by sophomore hitter Casey Foote ended the six-point run and gave the Tribe some momentum again. With the score tied 24-24, the College stole the set with a kill by Biniak off an assist by junior setter Katie Kemp, followed by another strong hit by freshman hitter Lauren Moussaid, also off Kemp.

The second set followed the same back and forth pattern as the first, the scores never more than four points apart. Wake Forest found its energy after a five-point run started by a hard hit from middle blocker Katie Moore. The Tribe’s final point of the set came from Biniak off Brenner, down 24-21. The set point came from a kill by Wake Forest middle blocker Caroline Kuhn.

Again, a tight third set ended in favor of Wake Forest. The last Tribe point came off a block by freshman hitter Kate Dedrick. The set ended with an intense hit by Wake Forest middle blocker Caitlyn Della, ending another set with a 25-21 loss for the College.

The fourth and final set consisted of two big runs by the Demon Deacons. Moore ignited the first four-point run, putting Wake Forest up 5-1. When the Tribe came back and up 19-17, an attack error opened the door for a six-point run for the Demon Deacons, handing them a 23-19 lead over the College. They maintained this lead through the end of the set. The final Tribe point was earned off a powerful kill by Foote off a Brenner assist. The match concluded with another sharp hit by Kuhn.

Overall, Wake Forest outplayed the Tribe, averaging 80 points to 55, 57 kills to 47 and 18 blocks to a mere five. Biniak carried the College on offense again this weekend with 18 kills, followed by Moussaid and Dedrick with eight apiece. Brenner and Kemp each contributed 21 assists; Brenner also added nine digs, behind Moussaid’s 16 and Turner’s 14. The Tribe only secured three service aces, one each by freshman middle hitter Julia Brown, freshman back row Katie Turner and Kemp.

“I’m proud of this team and know they are hungry for a win and will come out fighting,” head coach Melissa Ferris told Tribe Athletics. “The future looks bright for this team and I’m excited.”

Saturday afternoon, in a less eventful rivalry, the College faced off against Maryland Eastern Shore. The Tribe ultimately fell 3-0.

The first set appeared evenly matched until the score tied at 11-11. The Hawks came out with a five-point run that the Tribe could not recover from. The set ended 25-18 in favor of UMES. A Biniak kill marked the Tribe’s final points of the set. In a closer second set, the Tribe retaliated with runs of its own. Throughout the set, there were eight separate three-point runs. Despite its efforts, the Tribe fell 25-21.

I’m proud of this team and know they are hungry for a win and will come out fighting.”

The final set followed the pattern of the first. An early six-point run by UMES followed by three later three-point runs was too much for the College to handle. The Hawks took the set 25-16 and the match 3-0. The final match point by the Tribe again came from Biniak, this time off a Turner assist.

The Tribe executed zero aces to the Hawks’ five, four to seven blocks and 39 to 46 kills. Biniak led with 16 kills, more than any player on either team. Brown and Dedrick each contributed six successful hits.

Saturday evening, the College took on the Spartans (3-7) in the final contest of the invitational. Despite losing the first two sets, the Tribe came back to take the third and fourth sets before dropping the final fifth set 15-8.

UPST started strong in the first set with an immediate three-point run. All three points can be traced back to Spartan opposite hitter Lily Dempsey with a kill and two service aces. The Tribe ended the first run with a kill by Brown off a Brenner assist. After a few back and forth points, the Tribe went on a run of its own with four consecutive kills by Moussaid, Brown and Foote, respectively. The Spartans retaliated with a four-point run of their own, ignited by a kill from Dempsey.

The Tribe managed to close the gap, down only 20-19, but could not overcome a round of attack errors and more strategic hits from Dempsey. The set closed out 25-22 in favor of UPST.

Categorized by consistent hits and four and six-point runs for the Spartans, the second set followed the same lines as the first. Moussaid contributed two service aces near the end of the set, bringing the College within three points of the Spartans. The set point came off a Spartan block by Dempsey and Spartan middle blocker Gloria Ikenegbu. The Tribe fell 25-19 in the second set.

In contrast to the first two sets, the Tribe came out hot in the third. Moussaid initiated the comeback with a first point service ace. After a series of back and forth and catchup rallies, the College took the lead 10-8 with a kill by Brown off a Brenner assist. After a few more back and forth points, the Tribe took off on a five-point run, putting it up 17-12. A strong hit by Brown followed by two intense kills by Foote earned the Tribe its first win of the contest, 25-20.

That same energy translated into the fourth set. The Tribe stole the first point on a kill by Foote. An attack by Biniak started a four-point run that the Spartans struggled to come back from. Back and forth play continued, but the Tribe ultimately came out on top. A precise hit by Biniak concluded the set 25-16 in favor of the College.

The future looks bright for this team and I’m excited.”

Despite the Tribe’s energy and precision in the previous two sets, UPST came out swinging in the fifth and final set. The Spartans started out with a three-point run, followed by another handful of rallies later, putting them up 11-5. A powerful kill by Dedrick ended the second run, but the Tribe was unable to carry out a final comeback. A Dempsey block ended the contest 15-8 in favor of the Spartans.

Biniak more than doubled the points of the highest scoring Spartan player, Dempsey, 29 to 13. Dedrick contributed 14 kills while Moussaid added 10 to the board. Moussaid also dished out a total of three aces, along with two from Kemp and one from Brenner. Brenner surpassed 1,000 career assists during the invitational, the 13th player in Tribe history to reach this milestone.

“We have to continue to work hard to not dig ourselves into a hole,” Ferris told Tribe Athletics. “Against a good USC Upstate team, you can’t allow them to get a lot of runs of points and we did. I think we are still fighting to define who we are from point one to point 25.”

The Tribe will stay on the road to compete in the Wildcat Classic Sept. 15-16 in Tucson, Ariz., before returning home to Kaplan Arena. Conference play will kick off when the College welcomes Delaware to Williamsburg Sept. 21 at 7 p.m.