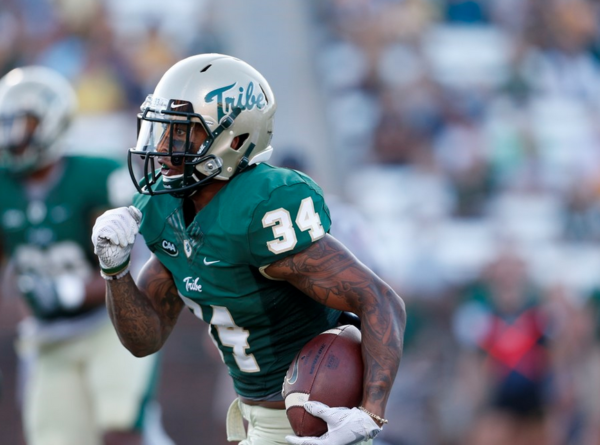 With just under eight minutes left in the third quarter and William and Mary (2-1) holding a slim 16-9 lead, senior linebacker Nate Atkins sacked Bucknell quarterback Matt Muh, ripping the ball out of his hands. Sophomore safety Corey Parker recovered the fumble, taking it 19 yards to the house to give the Tribe a 23-9 lead and put the game essentially out of reach.

The College relied on a powerful second-half effort with stingy defense and an under-control offense to defeat Bucknell (1-2) 30-9 Saturday in its home opener at Zable Stadium.

After the Bison methodically worked down the field with a balanced combination of rushes and passes, Tribe senior captain and defensive tackle Isaiah Stephens came up with a huge sack on 3rd and 5 to force a punt.

On the Tribe’s first possession, after a series of short rushes from junior quarterback Tommy McKee and redshirt freshman running back Noah Giles, true freshman tailback Nate Evans burst onto the scene with a huge 34-yard rush. Two plays later, Evans was into the end zone with his first touchdown for the Tribe, pushing it to a 7-0 lead with just over four minutes left in the opening quarter.

“He’s a true freshman and we didn’t want to throw him in there too early,” Laycock said. “He’s been performing really, really well in practice. I mean, not just the physical part but also the mental part of it, which is the biggest adjustment coming from high school to college.”

On their next possession, the Bison failed to convert on a short 4th and 1 in Tribe territory, handing the ball back to the College in relatively good field position. However, after the College methodically worked into Bucknell territory, a three-yard loss by Evans on first down was followed by two incomplete passes, and the Tribe was forced to punt.

Yet again, the College’s defense came up with a huge third down stop on the next Bison possession, this time as senior captain and defensive end Matt Ahola sacked Muh for a seven-yard loss after a swarm of Tribe blitzers reached the backfield.

On the ensuing punt, sophomore wide receiver Jalen Christian swung the momentum even further in the Tribe’s direction as he returned the kick 48 yards to set the College up at the Bucknell 20-yard line. Despite being forced to settle for a field goal, the Tribe remained solidly in control of the game with a 10-0 lead with seven minutes left until halftime.

Fired up and looking to put points on the board, the Bison stormed down the field, relying on a fast-paced passing offense and a big penalty against the College to cut the lead to 10-6. Sophomore defensive tackle Bill Murray blocked the ensuing extra point, leaving the Tribe’s lead at four.

After an extremely quick three-and-out for the Tribe, Bucknell marched down the field and looked poised to take a lead. However, on third and goal from the two-yard line, Muh couldn’t handle the snap and was forced to fall on the ball at the 16-yard line. Although the Bison made the field goal to cut the lead to 10-9 right before the half, their inability to get into the end zone came back to hurt them.

After the teams traded three-and-outs to open the third quarter, McKee appeared to settle in much more on the following possession, as he completed several passes in traffic, including a huge 29-yard gain to senior tight end Andrew Caskin. Giles punched in a powerful run from 15 yards out to give the Tribe a 16-9 lead even after the extra point was blocked.

On the following Bucknell possession, the momentum changed for good, as Atkins stripped Muh on a sack and Parker dashed 19 yards to the end zone, which pushed the lead to 23-9 after a successful extra point.

The Bison’s chances were squashed even further on their next possession, as Murray sacked Suh on third down, one of a whopping six sacks for the College for the game.

McKee kept the Tribe offense rolling on the next possession, balancing rushing and passing plays brilliantly to result in a four-yard touchdown pass from McKee to redshirt freshman Tyler Crist, pushing the Tribe lead to 30-9 with 44 seconds left in the third quarter.

The deflated Bison did not put up much fight in the fourth period, and the Tribe was more than content to run down the clock. The final score remained 30-9.

Atkins and junior linebacker Josh Dulaney dominated on the defensive side of the ball, each finishing with seven tackles and a sack.

Overall, Laycock was pleased with the team’s play, but wants to see more improvement out of his offense in particular.

“We don’t stay in rhythm enough on offense,” Laycock said. “We’ll work on it. Hopefully get some guys healthy too.”

The Tribe enters its bye week with a 2-1 record and will next face Stony Brook at 6 p.m. on Sept. 30 at Zable Stadium, looking to have impact players sophomore running back Albert Funderburke and senior wide receiver DeVonte Dedmon back in the lineup.