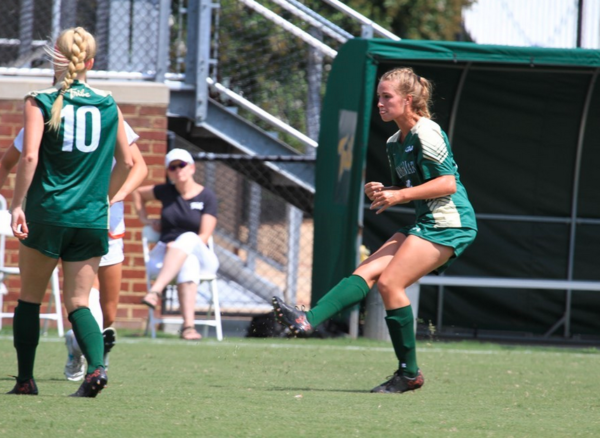 Sunday, William and Mary squared off against North Carolina-Greensboro. The Tribe was looking to end its four-game losing streak and get some momentum back as conference play approaches. Despite dominating possession and having more chances, the College fell to the Spartans 1-0.

The Tribe (4-5) had an early chance in the second minute when the defense cleared the ball down the field. The Spartans (3-5-1) were caught out of position, and junior midfielder Mackenzie Kober outran the Spartans’ defense to have a one-on-one opportunity against Spartan goalkeeper Aiyanah Tyler-Cooper. However, Tyler-Cooper was able to run out and meet Kober at the ball, and the shot deflected harmlessly out of bounds. The Spartans responded with a shot of their own in the sixth minute, but senior goalkeeper Grace Smith was able to make the save and hold onto the ball, preventing a corner kick.

Additionally, there was a lack of sustained attack for either team. Instead, each team was using a lot of short passing outside of the boxes, and sloppy play led to lots of early turnovers. In the 19th minute, the ball fell in a dangerous position in the box for sophomore midfielder Charlotte Hyland. Hyland blasted a shot on goal, but Tyler-Cooper was able to punch the ball over the net and out of bounds. The College had its first corner kick of the game, but the ball was easily cleared by the Spartan defense. The Tribe was able to keep the ball in the Spartans’ attacking half and keep some pressure on their defense for the next three or four minutes. The College was unable to score during this stint of pressure, but it gained some momentum.

The Spartans produced some pressure of their own, and in the 28th minute, Spartan forward Isabel Pearce made a run to get behind the Tribe defense. The pass was too long and rolled harmlessly over the line for a goal kick. A few minutes later, the Spartans had their first corner kick of the match, but it was kicked into the outside of the net.

The College nearly got the first goal of the contest when freshman forward Courtney Miles dribbled herself open and bent a shot with her left foot that just rose over the crossbar. The last 10 minutes of the half were uneventful, with very few chances for either team. The buzzer sounded at the end of the first half with the match still deadlocked at zero.

The Tribe came out strong in the second half with consistent pressure and multiple chances in the first 10 minutes. In the 50th minute, the College was able to get a good cross into the box, and freshman midfielder Erin Dailey flicked a header on goal, but it was easily handled by Tyler-Cooper. Two minutes later, senior forward Sami Grasso got behind the defense and fired a low shot toward the far post. The ball got past the outstretched hand of Tyler-Cooper but bounced just wide of the net and went out for a goal kick.

The Spartans were finally able to give their defense a break when they earned a corner kick in the 58th minute. After the ball was originally cleared out of the box, the Spartans were able to knock it back toward the goal, and Spartan forward Quiqui Hita flicked the ball past Smith into the right side of the goal to put the Spartans up 1-0, despite the Tribe dominating the second half thus far. In the few minutes following the goal, neither team was able to carve out any chances, but the College continued to control possession of the ball.

In the 67th minute, the College forced a corner kick after sophomore defender Hannah Keith attempted a long shot that required a save from Tyler-Cooper, who punched the dangerous shot over the crossbar and out of play. The ensuing corner kick was cleared harmlessly by the Spartans. The Tribe earned another corner kick in the 73rd minute, but once again it did not lead to any chances. A minute later, Miles crossed the ball dangerously into the box, and Grasso was able to get on the end of it, but the ball bounced off of her foot and out of bounds.

As the match entered the last 15 minutes, the College got increasingly desperate to find an equalizer and avoid a fifth straight loss. In the 78th minute, the Tribe won a free kick from just outside the box, and Grasso flicked the ball toward the goal, but once again it was just wide of target. With seven minutes remaining in the match, it had been a while since the College had put a shot on net to challenge Tyler-Cooper and create a chance to tie the match. With less than 30 seconds remaining, Grasso kicked the ball into the box, and it deflected off a defender toward the goal, but Tyler-Cooper was able to grab the ball, and the Spartans held on for a 1-0 victory.

“We have to improve on everything,” head coach John Daly said.

Thursday, the College will return to action and take on James Madison to start Colonial Athletic Association play. The Tribe looks to secure a win after five straight losses. The start of conference play will give the College a chance to reset as it tries to save its season with a strong showing in the CAA.

“I think mentally, starting the CAA’s could not come at a better time,” Hyland said. “These [games] are when the stakes are higher.”