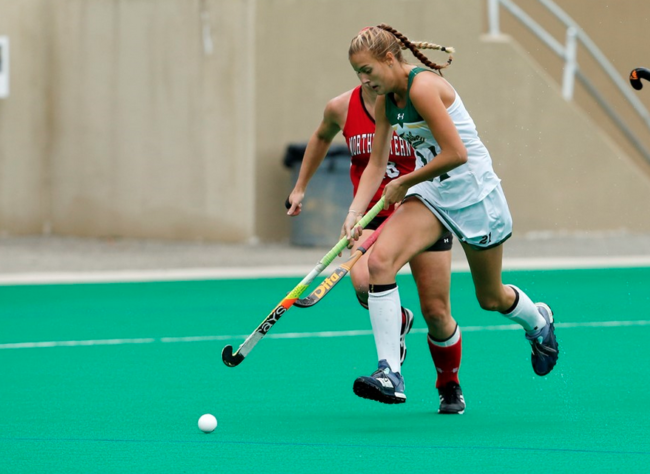 Coming off a 3-2 victory against Old Dominion, the Tribe played two conference road matches against Delaware and Drexel last weekend. The College lost its first Colonial Athletic Association match of the season Friday night against the 11th-ranked Blue Hens, 3-1. The Tribe bounced back Sunday afternoon with a 2-0 triumph over the Dragons. With its victory over the Dragons, the College clinched a spot in the four-team CAA tournament.

The Tribe’s six-match winning streak came to an end Friday night against the defending national champions. The College (12-5, 4-1 CAA) fell out of a tie for first place in the CAA as the Blue Hens (11-4, 3-0 CAA) gained sole possession of first place. The Tribe fell behind early, as the Blue Hens scored two goals within the first 20 minutes of the match.

With just under 29 minutes remaining in the first half, Delaware got on the board first, as the College conceded a penalty corner to the Blue Hens, who were able to capitalize on the opportunity. Forward Greta Nauck, who is fifth in the country in goals scored per match, ripped a shot past sophomore goalkeeper Morgan Connor for her 17th goal of the season.

The College was able to cut the deficit to two in the last minutes of the match. With just over three minutes remaining, senior midfielder Estelle Hughes put the Tribe on the board, but the match ended in a 3-1 Blue Hens victory.

Sunday, the College bounced back from its first conference loss by shutting out the Dragons (6-11, 1-3 CAA) in a 2-0 victory. The Tribe scored a goal in each half and put forth a dominant effort on defense, holding the Dragons to only six shots, compared to the College’s 22. With just over 10 minutes remaining in the first half, the College broke the scoreless tie. Senior midfielder Emma MacLeod passed the ball to senior forward Cammie Lloyd, who scored, giving the College a 1-0 lead. Early in the second half, MacLeod got a goal of her own off of an assist by sophomore defender Christie van de Kamp. The College maintained this 2-0 lead for the last 30 minutes of the match and emerged victorious, clinching a spot in the CAA tournament.

This week, the College will play its last game of the season Friday against rival James Madison. The winner of that match will most likely be the No. 2 seed in the CAA tournament. The two teams will probably have a rematch a week later, Nov. 3, in the semifinals of the CAA tournament, which will be hosted by the No. 1 seed in the tournament. The championship game will be played Nov. 5. The NCAA tournament begins Nov. 8, and the College has a chance of qualifying and will look to make a deep postseason run.