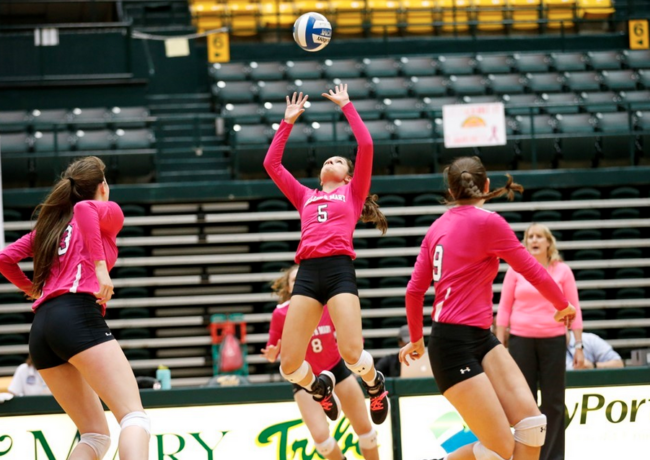 Friday, William and Mary went up against Colonial Athletic Association foe Delaware in a competitive five-set contest. Despite hard-fought rallies, the Tribe (4-20, 1-9 CAA) fell 3-2 to the Blue Hens (5-15, 3-7 CAA). Sunday, the College stayed on the road, this time to take on Towson in another conference matchup. Unlike Friday’s game, the Tribe was defeated by the Tigers (21-3, 7-3 CAA) in three straight sets.

The Tribe started strong in the first set against Delaware, claiming an early 4-0 lead. However, the Blue Hens caught up quickly and the teams stayed within a point of each other until Delaware went on a four-point run and found themselves up 16-12. A kill by sophomore hitter Casey Foote broke the run, but the College struggled to play catch-up. The Blue Hens maintained their late lead to the end of the first set as the Tribe fell 25-20.

The second set consisted of few runs and mostly back-and-forth points until the Tribe broke out with five consecutive points late in the set. Leading 23-17, the College finished strong with kills by freshman middle hitter Julia Brown and senior hitter Sydney Biniak, both off assists from junior setter Katie Kemp. The Tribe won the second set 25-19.

Despite an early 3-1 lead for Delaware in the third set, the College came out with the same energy as the previous set and stole a 6-4 advantage thanks to a precise hit from junior hitter Heather Pippus, assisted by sophomore setter Autumn Brenner, as well as a block from Pippus. While the Blue Hens managed to tie the set up 7-7, they could not compete with the Tribe’s momentum. The College dominated the third set 25-12, the final five points coming off a five-point run. Freshman hitter Kate Dedrick contributed two of the points, one from Pippus, a service ace from senior back row defender Sara Zumbach and the final point on a solid block by Pippus and Brown. The Tribe was in the lead 2-1.

In the fourth set, the Tribe went on a six-point run, its longest in the contest, leading 11-7 over the Blue Hens. Delaware retaliated with a five-point run of its own, reclaiming the lead 12-11. After a few back-and-forth points, the Blue Hens went off on another five-point run and the Tribe struggled to keep up. An attack by Pippus brought the Tribe within one point, barely down 24-23, but the Blue Hens inevitably took the set 25-23.

Delaware controlled the fifth and final set with an early five-point run, putting it up 6-1. Despite a solid block by Brown and Pippus and a few good hits, the Blue Hens won the final set 15-11 and the game 3-2.

Dedrick led the Tribe offense with 17 kills, followed by Pippus with 13 and Biniak with 12. Zumbach contributed two service aces, as did freshman defender Katie Turner. Brenner had 25 assists, closely trailed by Kemp with 23. Zumbach held down the defense with 24 digs, assisted by Pippus with 19.

The Tigers jumped to an early 3-0 lead in the first set. The Tribe managed to take the lead 6-5 thanks to a service ace by Brenner, but it could not hold its lead for long. Towson went on a five-point run and the College struggled yet again to catch up. A kill by Foote managed to bring the Tribe within one point of Towson, 16-15, but it was still unable to take the lead. A four-point run by the Tigers decided the set 25-17 in favor of Towson.

Another early 3-0 advantage for the Tigers marked the beginning of the second set. Despite a five-point run late the in the game thanks to two kills and three blocks by Brown (two blocks assisted by Foote, one by Dedrick), the Tribe was unable to steal the lead from Towson. The College dropped the second set 25-16.

The third and final set of the game was completely dominated by Towson. Down 6-0, the Tribe scrambled to regain possession of the ball, which it did on a service error. Biniak and Foote managed a hit each before the Tigers set off on consecutive four and five-point runs. Down 24-11, the College fought hard for its final three points with three consecutive and aggressive attacks by Biniak off Kemp assists. Regardless, the Tribe fell 25-14 in the set and 3-0 for the match.

Biniak, Brown and Foote led the offense with seven, six and five kills, respectively. Brenner contributed the Tribe’s only service ace, as well as seven assists. Brown was active in five of the Tribe’s six blocks, aided by Foote and Dedrick on two each.

The Tribe will welcome Elon to Kaplan Arena at 7 p.m. Wednesday before hitting the road to take on James Madison Friday.