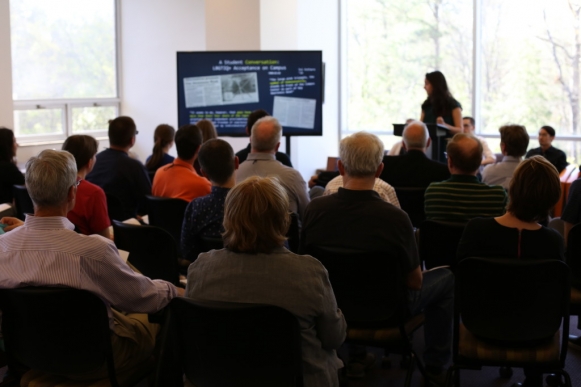 A group of students gathered in the theatre of St. George Tucker Hall Thursday, Nov. 2 to learn about the history of the LGBTQ community at the College of William and Mary as well as in the greater areas of Williamsburg and the state of Virginia. However, what began as a simple question-and-answer session turned into a clear example of what students and community members at the College do to help each other.

The event was put on by the Lambda Alliance, the College’s LGBT+ student organization for undergraduates, in place of their regular Thursday night meeting. The panel was comprised of three professors: Leisa Meyer, director of American studies and a professor in the gender, sexuality and women’s studies program; Laurie Wolf of the theatre department; and Maureen Fitzgerald of the religious studies and American studies departments. All three said that they identify as lesbian when they introduced themselves.

When asked why she agreed to be a part of the panel, Meyer said it was because she thought it was important for queer students to see themselves represented in the wider community.

The occasion began with a short presentation by Meyer on the College of William and Mary Mattachine LGBTIQ Research Project, which she leads. The project aims to search out and preserve the LGBTQ history in Virginia through methods such as oral histories.

Through the project, Meyer and the student researchers hoped to find parts of LGBTQ history that official archives and Swem special collections don’t always contain, such as the experiences of queer people of color.

In many archives, the archive is sort of the vault of the victors. The documents are largely about white people,” Meyer said.

“In many archives, the archive is sort of the vault of the victors. The documents are largely about white people,” Meyer said.

In its first year, the project revealed many stories from other perspectives. A student researcher on the project, Maya Farrhenderson ’20, was in attendance at the panel.

“The first person that I interviewed was this, like, 99-year-old guy, and he had so much to say — it was just amazing,” Farrhenderson said. “I’d never heard anything akin to that in my life. … It was a really amazing and intimate experience.”

The project also uncovered some of the impact that the Virginia LGBTQ community, specifically groups at the College, had on the national LGBTQ movement. For example, the Gay and Lesbian Alumni Association (GALA for short) was a key litigant in a 1991 suit against Virginia’s ABC board. The ABC board did not allow felons, prostitutes, racial agitators or homosexuals to serve alcohol at gatherings. GALA, along with several other groups, successfully worked to overturn the law.

“They were in the VCU special collections, and they were all jumping up and down, which you do not do in an archive,” Meyer said of the discovery’s impact on the project and researchers.

Following Meyer’s presentation, the panel itself began. Panel organizer Alexina Haefner ’19 asked all three professors questions she had prepared about their experiences as part of the LGBTQ community.

Fitzgerald began by acknowledging Meyer’s optimism in Virginia’s fight for progress, but emphasized that things were often not that easy in the Commonwealth.

“I think it sucked to live here, as a lesbian for 20 years,” Fitzgerald said. “It’s been hard to live in Virginia. I’ve lived here for almost 20 years, and there is not a physical space between Norfolk and Richmond where you can walk in as a lesbian or gay person and say ‘this is my space.’”

Meyer agreed that Virginia is a hard state for LGBTQ people to live in, noting specific personal and national instances in which discrimination has occurred and had to be fought against. She noted that the state of Virginia as a whole is one of many that still does not have anti-discrimination laws for LGBTQ people on the books.

“As a state, there’s no anti-discrimination provision for sexual orientation or gender identity expression,” Meyer said. “[This is one of the] reasons why Virginia is hard.”

However, all three professors agreed that the area of Williamsburg and the College are both much more welcoming now than when they arrived, especially in terms of the way other faculty view them.

Wolf said that she came to the College from London, after living in Los Angeles, and that the theatre students were very welcoming.

“I didn’t feel that same sort of camaraderie from colleagues,” Wolf said. “It was difficult. Now, however, the extent to which people feel free to be openly out has changed tremendously.”

Meyer noted that students in particular feel much more “comfortable with who they are.” Despite this, the professors agreed that there is still a wide range of how comfortable people are with coming out, especially to their families, depending on their background.

As the panel continued, what began as an informative question-and-answer session became a communal attempt to come up with ways to continue to make the College’s LGBTQ population more comfortable and confident.

“What do you lack that we can do for you?” Fitzgerald asked of the audience. The crowd then began throwing out suggestions for how the College could continue to improve its treatment of LGBTQ students.

One student proposed an LGBTQ center to improve outreach to students who need it. Another expressed a desire for professors to ask students what pronouns they use via private surveys, so students wouldn’t be placed on the spot in class. Yet another student mentioned improving the visibility of LGBTQ-related events, using next week’s Transgender Awareness Week as an example.

The students and professors went back and forth, brainstorming ways for the campus LGBTQ community to move forward. This method of using a shared history was central to the panel’s stated purpose.

Because being LGBT isn’t hereditary, you don’t inherit it from your family, and we don’t learn anything in school. It’s very hard to get [LGBTQ history] passed on if you’re not like actively seeking it out,” Haefner said. “So I wanted to do something.”

“Because being LGBT isn’t hereditary, you don’t inherit it from your family, and we don’t learn anything in school. It’s very hard to get [LGBTQ history] passed on if you’re not like actively seeking it out,” Haefner said. “So I wanted to do something.”

Other students talked about what they wanted the LGBTQ community to do in the future with their shared historical knowledge.

“I would like [it] to become a more mainstream idea, that we deserve to feel comfortable without having to explain ourselves to anybody,” Madeline White ’18 said. “And then if we would like to engage other people, and explain things to them, and explain what they’re doing that’s hurtful, or whatever, we can. But that shouldn’t be a condition for respect and acceptance.”