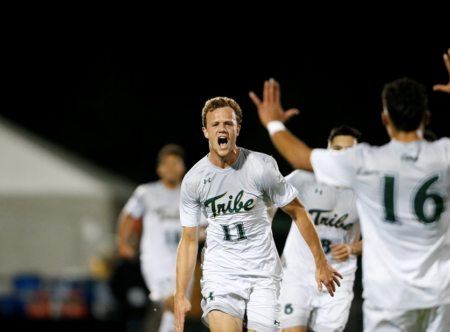 Thursday, William and Mary hosted Columbia at Martin Family Stadium and suffered a 2-1 loss, which eliminated the College from the National Collegiate Athletic Association tournament and concluded the season for College.

“Obviously we’re disappointed, but I thought it was a heck of a soccer game,” head coach Chris Norris said. “[They were] two really good teams that gave it everything they had. I think when we look back we’ll know we gave a heck of an effort.”

The Tribe was able to take the lead originally, scoring before the end of the first half.

In the 31st minute, sophomore midfielder Reeves Trott passed the ball to junior forward Ryder Bell. Bell ripped a shot from the 30-yard line. The ball ricocheted off the post and sunk into the back of the net. This marked Bell’s seventh goal of the season as the College took the lead.

“I thought we started a little slow from nerves but we settled in after the goal,” Bell said. “Once we got that goal we started dominating the game. In the second half I think it was more of the same. It ebbs and flows and the momentum shifts, but I thought we had the majority of the momentum throughout the game.”

The College moved into the second half with a one-goal advantage.

The Lions found the equalizer in the 77th minute off a set piece. Defender Nike Azuma sent a lofted ball toward the face of the goal. Defender Zach Morant netted the ball with a header toward the ground, bringing the game to a 1-1 tie.

“After they got their goal I think we got a little frantic,” senior goalkeeper Phil Breno said. “We got a little more nervous and couldn’t connect some things, but I still think we were still dominating. Unfortunately, we didn’t get anything out of it.”

The game moved into its first period of overtime, which did not produce a goal for either team.

The Lions found the game-winning goal during the second period of overtime in the 103rd minute off another corner kick that mirrored their first goal.

Midfielder John Denis directed the ball to the far post where defender Alex Bagerl stood ready and headed the ball toward the goal. The ball rebounded off the post toward the middle of the six-yard box where forward Kynan Rocks tapped it in for the game winning goal, ending the match.

Although the College was unable to find a favorable outcome in this game, the team found much success throughout the season’s entirety.

As a team, the Tribe scored a total of 41 goals this season while only giving up 24.

Junior forward Antonio Bustamante was also recognized as Colonial Athletic Association Player of the Year. Bustamante is the sixth player in the College’s history to attain this honor and the first one since 2009, when Andrew Hoxie earned this title.

“The fact that [Bustamante] keeps getting better [stands out to me],” Norris said. “He’s been really impactful since he arrived as a freshman. He had a great year last year and he has built on that. His goal tallies for his first three years are five, 10 and 15. The fact that he wants it badly and he works really hard at it, that he’s humble about it even though he is the guy getting all the headlines, he understands that there is nothing he can do that will come in a solo effort. He knows that everything he does is built on the platform of all the work that his teammates are doing. He’s a tremendous pleasure to coach and I’m thankful that we have him for one more year.”

As a whole, the team worked together throughout the season to overcome five losses and five ties in order to advance late into the season.

“I’m really proud of this group,” said Norris. “We put together a really tough schedule. In the end we were able to start playing well and go on a run and get to this point. You can see tonight the fight in this group is tremendous and they wanted it really badly. They work very hard for each other and they care for each other on and off the field. It’s obviously disappointing, but I’m really happy with where this team ended up at the end of the season in terms of who they are and how they play.”