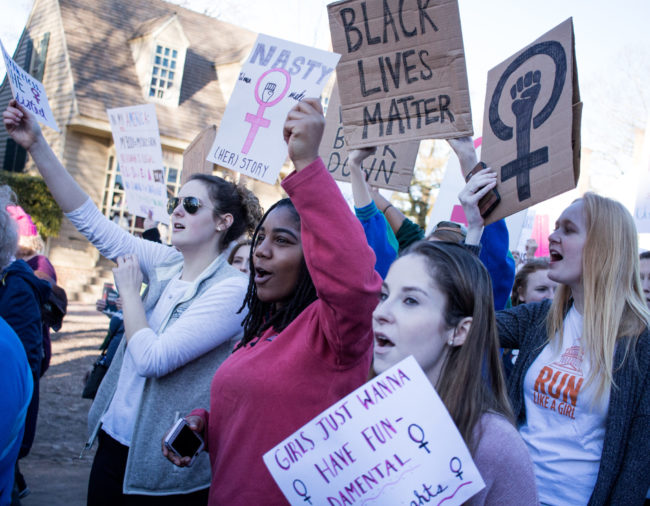 Students and community members gathered near the courthouse on Duke of Gloucester Street in preparation for the Women’s March on Williamsburg Saturday Jan. 20. Partnered with Common Ground, a local group dedicated to finding community agreement on political issues, and Williamsburg James City County Indivisible, the annual march included a line-up of speakers from the political sector, including 2017 Democratic Candidate for District 94 Shelly Simonds and 93rd District Democratic Representative Mike Mullin.

Core Organizer for Common Ground Elizabeth Polster ’14 said that her organization partnered with the march in order to continue advocating for local change, despite the fatigue experienced by new organizers the previous year.

We wanted to show and to see that there are other people who are still here,” Polster said.

“We wanted to show and to see that there are other people who are still here,” Polster said. “There was a lot of exhaustion from new activists or organizers who started off early last year who had been frustrated by the election, came out and started to get involved.”

According to Polster, the Women’s March on Williamsburg last year had grown from a spontaneous idea from a local woman named Sue Dickler.

“She had the idea to do it, invited friends, and then they had 700 people turn out was what they estimated,” Polster said. “So that was very much on the fly. It wasn’t planned or organized as much like this one.”

A member of Common Ground and WJCC Indivisible Alice Pastorius attended the march in Williamsburg last year and noted how she and other attendees found out about the march by chance.

Pastorius also emphasized the dramatic change from “mostly old, white people” in attendee turnout last year to “many more young people [with] so much more diversity” in this year’s march.

One member, Diann Smith, said her organization’s goal was to urge others to get involved “from the ground up” in progressive politics.

“I believe we have to fight even harder this year,” Smith said. “We were very active last year campaigning for local progressives and we got so close with Virginia and we just need to fight even harder this year to win Congressional Districts 1 and 2. I think this is encouraging. I’m so excited to see so many people. It’s a time to be reinvigorated and celebrate before we start fighting again.”

Other marchers also saw elections as a way to challenge the current political climate. J.P. Cordial of Gloucester said he felt energized by the recent elections and the possibility of more diversity in government positions.

I think that institutionalized discrimination for 250 years has created a horrible problem in our government, and right now one of the biggest and most important qualifications for any leader that I’m going to vote for is that they’ve experienced that institutionalized discrimination, whether they’re women, people of color, they’re lesbian, gay, bisexual, transsexual,” Cordial said.

“I think that institutionalized discrimination for 250 years has created a horrible problem in our government, and right now one of the biggest and most important qualifications for any leader that I’m going to vote for is that they’ve experienced that institutionalized discrimination, whether they’re women, people of color, they’re lesbian, gay, bisexual, transsexual,” Cordial said. “Those are the people who need to be in office right now because I think that’s the only way at this point that we have any hope of leveling the playing field.”

Kit Schaaf-poms, who attended the Women’s March on Washington last year, said the rise of neo-Nazism spurred her to march again this year.

“I’m a queer woman,” said Schaaf-poms. “I’m married to another queer woman. I’d kind of like not to be murdered for being married to a Jewish woman.”

Schaaf-poms believes that since the last march in Washington, people have become more aware of the problems that need to be addressed in order for culture to change.

“People seem to be a lot more aware and a lot more willing to talk about things and say, ‘Hey, that’s just wrong. We shouldn’t be doing that,’” Schaaf-poms said. “It doesn’t seem to have actually reached the point of actually changing anything in the government, but it’s at least changing it down here and the fact that Virginia is swinging blue is kind of a huge thing.”

Tribe marchers Rochelle Belton and Nori Thurman ’21 agreed that an increase in awareness of sexual assault has occurred because of the #MeToo movement.

“I think this year after the MeToo movement a lot more people are marching because they see that progress can be made and a lot of people are inspired by that because last year it hadn’t emerged as much,” Thurman said.

Praising the empowering nature of the march, Elizabeth Dannenfelser ’18 encouraged those interested in enacting change to get involved.

“Even if it’s just going to a march, even if maybe you don’t feel comfortable going or you don’t really know anyone, you feel weird, I think it’s a really enriching experience and also a really good way to motivate yourself and to motivate others to get involved politically, to go out and vote and to do things that really initiate change.”