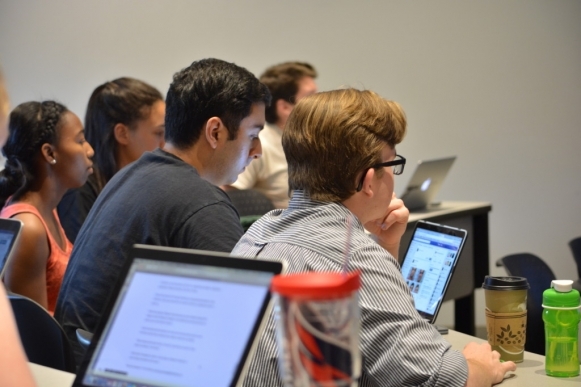 This March, the College of William and Mary will host a conference titled “Tending Our Roots: First Annual Virginia Student Symposium on Race in Higher Education.” Student Assembly President Elijah Levine ’18, Vice President Annelise Yackow ’18, and Chief of Staff Noah Ferris ’20 are planning the event as a three-day, statewide conference.

According to Yackow, following the “Unite the Right” rally in Charlottesville, she and Levine began reaching out to student government leaders at the University of Virginia. This conference is the result of early conversations. Levine said the conference is also relevant because this academic year marks the 50th anniversary of African-American students in residence at the College.

“All of it definitely comes back to our motivation, our two big anniversaries of our schools,” Levine said. “These are such salient topics that it seems very apropos to hone that energy into a very constructive conversation. I think that at the basis of it is a premise that we have a platform, have access to our wonderful faculty, a network of students both here and beyond in other Virginia schools, that we would be selling ourselves in the position short if we didn’t capture that and use it to, in the broadest way possible, make a conversation that involves promoting as many voices as possible.”

The conference will be held March 29-31 on campus. According to Ferris, Thursday will serve as a networking day. Friday and Saturday will feature group discussions, lectures and panel talks on topics such as immigration, the history of colonial America, early Virginia history and how to reconcile the history of colleges built by slaves.

Ferris said they do not have a finalized list of speakers, but he anticipates a mix of professors from the College and UVA, in addition to activists. There will also be a keynote address Thursday, which he hopes will tie in the current climate on race and race relations.

From the inception, we were talking about a more robust way to bring these ideas to the forefront of campus; we talked about curriculum change but didn’t know if it was feasible,” Ferris said. “This conference seemed like a robust way to further discussion and bring student leaders from around the state and promote ideas and get these ideas on people’s radars.”

“From the inception, we were talking about a more robust way to bring these ideas to the forefront of campus; we talked about curriculum change but didn’t know if it was feasible,” Ferris said. “This conference seemed like a robust way to further discussion and bring student leaders from around the state and promote ideas and get these ideas on people’s radars.”

The conference will be open and free to all students at the College. Levine said that students will be able to RSVP for the event on a website that is not yet live, but that College students will not be required to RSVP.

Student government leaders from the College and UVA are preparing to send out invitations to students at approximately 27 other Virginia schools, including private and public universities, community colleges and historically black colleges. Levine said ideally, each school will send around eight student representatives. Admission will be $15 for each student from another university.

“That component that brings in students from other schools, it shows that these aren’t problems that only affect people on our campus,” Levine. “It would behoove everyone to exchange ideas about and gain more recognition … bolster solidarity, show that this is important.”

Levine also said that he hopes to make the event as accessible as possible for students around the state by inviting all students instead of just student government leaders.

“This is where it becomes important, doing as much work as we can both within SA and by reaching out to student groups on campus, to make it not just an invitation to student governments elsewhere, but all actors engaged in this conversation,” Levine said. “We want to make sure on the front end that we are making it accessible, letting these campuses decide who makes up the conversation on their campuses, so that they can engage in this curriculum, engage with our students in this exchange of ideas and take in what I think is going to be a pretty substantive curriculum.”

As for funding the event, Levine said the only expenses will come from potentially providing lunch for attendees and reserving the rooms for the event. All students who choose to travel to the conference will be responsible for transportation and housing costs, although he said he hopes to arrange subsidies and block rooms with local hotels.

Levine, Yackow and Ferris have applied for grants from the College and from UVA for this event, and said student government leaders at UVA have also helped in applying for grants. They also said they would be able to use SA reserves to cover these costs.

Yackow said that this event fits with several themes in the current political and social climate.

I think this is very much going forward with a lot of attitudes coming forward that we are now just discovering have always been there, which has surprised many,” Yackow said.

“I think this is very much going forward with a lot of attitudes coming forward that we are now just discovering have always been there, which has surprised many,” Yackow said.

Levine said that his goals for the conference are to create a space to promote marginalized voices and to use a statewide symposium to offer those voices legitimacy.

“I think there has to be a solid space that has a concerted effort to bring legitimacy to voices that are marginalized, treating them with the same respect that a statewide symposium affords. I think that does a lot for informing the solidarity of a movement that seeks to genuinely take seriously the interests and experiences of students not just on our campus but on campuses around the state,” Levine said. “With that being at the front end and at the informational end, it is then going to be necessary to bring institutional actors and actors from other student groups and other activist groups into a place where the channels of communication are open and where ultimately, they can have a conversation with much more open ears than mouths at times and then feel more emboldened, question some assumptions they had before, be more informed citizens and participants.”