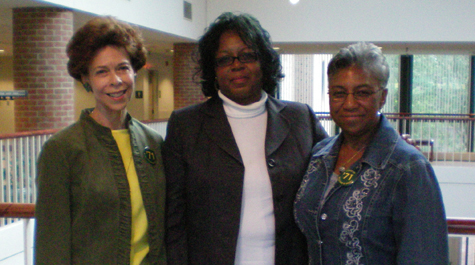 In the fall of 1967, the College of William and Mary welcomed its first three residential African-American students: Lynn Briley ’71, Janet Brown ’71 and Karen Ely ’71, who were also the first African-American women to attend the College as undergraduates. To commemorate the 50th anniversary of their arrival, the College will recognize the milestone during the 2017-2018 academic year with various ceremonies, exhibitions and speaker events.

English professor Jacquelyn McLendon said that the anniversary represents an “important milestone” for the College and for the Williamsburg community.

In addition to celebrating the first students that were admitted in residence, it shows some of the progress that the College has made,” McLendon said. “We’ve had a lot of interest from the campus community and surrounding community in terms of support.”

“In addition to celebrating the first students that were admitted in residence, it shows some of the progress that the College has made,” McLendon said. “We’ve had a lot of interest from the campus community and surrounding community in terms of support.”

McLendon, who chairs the steering committee for the 50th anniversary of African-American students in residence at the College, said that a variety of events will be included in the yearlong celebration.

She said that John Thomas, a member of the Board of Visitors and the first African-American justice to serve on the Supreme Court of Virginia, will address the legacy of the alumnae during Convocation Aug. 30. As for how the anniversary will be incorporated into Commencement, McLendon said it was not yet certain.

The steering committee has also collaborated with an array of academic departments and projects at the College to organize classes and bring speakers to campus who will engage with the anniversary and broader topics.

During summer 2017, the College hosted nationally recognized artist Steve Prince to instruct a course where students would help complete a mural.

According to McLendon, four faculty members and several community members were also involved in the mural’s creation.

The course, titled Workshop on Black Expressive Culture, will have its mural exhibited in the Earl Gregg Swem Library starting Aug. 31 and added to the President’s Collection of Art.

In addition to creating classes to commemorate the occasion, the English department’s Patrick Hayes Writers Festival will host Brenda Marie Osbey, a poet and nonfiction writer, to read her poetry Sept. 14.

She’s been commissioned to do a poem specifically for the occasion,” McLendon said.

“She’s been commissioned to do a poem specifically for the occasion,” McLendon said.

History professor and Director of the Lemon Project Jody Allen Ph.D. ’07 said she worked with fellow committee members to plan this year’s symposium for the Lemon Project. According to Allen, the upcoming symposium will focus on the 50th anniversary as well as desegregation in higher education in Virginia.

Oral historian Carmen Bolt, who said she was hired specifically to cover the 50th anniversary of African-American residential students and the 100th anniversary of co-ed students, has reached out to alumni hailing from different decades. Bolt’s goal as an oral historian is to get “as full a scope as possible of their experience here.”

“It all contributes to this growing knowledge we have historically,” Bolt said. “African-Americans have been an underrepresented group. We are trying to address that by collecting these oral histories and filling in some of those gaps that we don’t know about.”

Board of Visitors Member Warren Buck M.S. ’70, Ph.D. ’76, D.Sc. ’13 reflected on the anniversary and what the yearlong commemoration meant for his work as a member of the Board.

“For me, as a member of the Board of Visitors, I think it’s really significant that William and Mary is recognizing in a really public way the impact of having African-Americans and generally people of color living on the campus,” Buck said.

As one of the members involved in the steering committee, serving alongside Briley, Brown and Ely, and as a founder of the Black Student Organization, Buck, who arrived on campus as a graduate student two years after the three alumnae did, noted that his experiences with the alumnae were “very deep.”

“We collaborated with other students who arrived in 1969 to create the Black Student Organization,” Buck said of his involvement with the alumnae. “The reason for creating that was to move towards building an infrastructure at William and Mary that can support African Americans and students of color.”

Allen said she chose not to attend the College as an undergraduate because of what she had heard from her parents and their friends.

While Allen ended up pursuing a doctorate in history at the College, she noted that the work of the alumnae and other students who attended the College before her helped her feel welcomed.

“I think a large part of why I was comfortable there in the [19]90s was because of the people who came before me,” Allen said. “They were important to the history of the College and even a force in my own personal history as an alum of the College.”

Buck, who said that the culture around the time of the alumnae’s arrival invoked “a pure, frightening experience” for other incoming students of color, said the three women were perseverant.

“It took a lot of courage, a great deal of courage and bravery, for those three women to come on campus when they did,” Buck said. “So it’s something remarkable in the human spirit.”