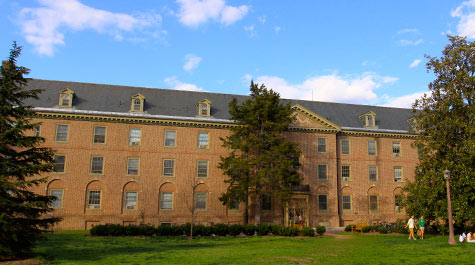 For the initial weeks of the fall semester, the freshman class seemed stuck in a conversational Twilight Zone. Days of grueling small talk and orientation-mandated icebreakers had worn us out completely. As we trudged toward the brink of social exhaustion, asking substantive questions of our new acquaintances became impossible. I figured more hackneyed diatribes about hometowns or intended areas of study would have bored anyone to death, so by the fourth day of freshman orientation, asking about someone’s dorm was the only question left in my increasingly barren repertoire of polite interactions.

Luckily for me, freshman housing is an endless source of intrigue at the College of William and Mary. Long before I stepped foot in Williamsburg for freshman orientation, I had heard all about the College’s dorm-related stereotypes. If you lived in Yates, you were destined to go out ad nauseum. Students relegated to the distant  outskirts of campus in Botetourt were doomed to unbearably long walks to Marketplace. Jefferson was always passed over as insignificant; personally, I only recognized it as a freshman dorm in mid-September. Living in Monroe was rumored to be an academic death sentence, but it was redeemed by its proximity to Wawa. Who needs a social life when you have free water?

After having the opportunity to meet people from across campus, there seems to be a certain degree of truth to the residence hall stereotypes that preceded my enrollment at the College.

I initially thought that dorm-related stereotypes were fairly ridiculous given the random nature of freshman housing assignments. We were incapable of selecting a specific dorm and assignments were made solely on the basis of a laughably brief survey; it seemed idiotic that an individual’s personality could even vaguely coordinate to a certain residence hall. Aside from the iconic “tag yourself” freshman dorm memes, I thought the whole premise of evaluating individuals based on their hall was nonsensical.

A semester later, my perspective has evolved. After having the opportunity to meet people from across campus, there seems to be a certain degree of truth to the residence hall stereotypes that preceded my enrollment at the College; people in Yates actually do seem to go out more. At most, I’ve met three people from Jefferson. I can personally attest that living in Monroe truly has resulted in a crippling addiction to free 32-ounce cups of water.

To my surprise, freshman housing appears to be a fairly accurate reflection of an individual’s personality. Unlike fickle Myers-Briggs and Enneagram tests that fluctuate on a daily basis, the blissful permanence of residence hall assignments is redeeming; and, after all, it makes sense that individuals would self-select into dorms that fit their interests and temperaments. The reputations associated with each residence hall exist for a reason, as decades of residents have cultivated communities from our college’s decrepit dormitories. It seems shocking, but our responses to a measly freshman housing survey might actually provide us with a strong indication of our social and residential preferences.

Obviously, there are exceptions. There are plenty of introverts in larger dorms and extroverts in smaller ones; stereotypes should never be interpreted as a comprehensive evaluation of a group of people. But regardless of how arbitrary they seem, it is fascinating how our residence halls sometimes so bitingly reflect our identities. Only time will tell if next year’s freshman class perpetuates the trend.