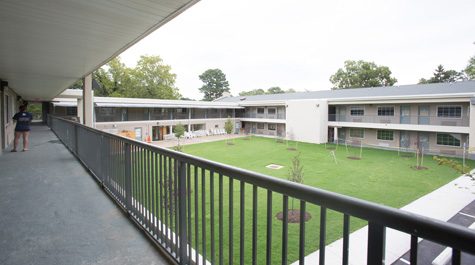 I heard the news last week while sitting at my desk listening to two residents talking noisily outside my door.

“Did you hear 20 people left this place last semester?” one said.

I was not surprised by this news; I had just returned from winter break to find that many of the doors in my hall were missing their name tags. The loud yammering from other rooms was noticeably absent.

Richmond Hall is the newest dorm on campus, and to judge by the turnover, possibly the most dismal. Exactly why is difficult to say.

Sure, the remote location is what most people complain about. A former motel, the dorm rises from a parking lot on Richmond Road between Food Lion and Domino’s. It is separated from campus by 0.7 miles of residential Williamsburg.

Most people arrived here on the outskirts because they had nowhere else to go. And as a result, we, the rejects, don’t have much in common besides the fact that we got stranded out in the middle of Williamsburg.

In bad weather, we arrive to class sopping wet from long walks in the rain. It is simply a pain to try and go anywhere when you live in Richmond Hall.  As my roommate Joshua put it, “In the morning, I go from here to the business school and to Sadler a couple times and only come back here at night. I hardly live here.”

But I don’t think it’s the location that entirely explains the exodus. Most of us, after all, have bikes. From the look of the rack outside, students should not have trouble getting to class on time. In fact, if there is a problem with Richmond Hall, it is that it stands apart from the rest of the College of William and Mary not only geographically, but culturally.

Richmond Hall’s resident population consists mostly of transfer students and people who turned in their housing forms late. Most people arrived here on the outskirts because they had nowhere else to go. And as a result, we, the rejects, don’t have much in common besides the fact that we got stranded out in the middle of Williamsburg.

Hall meetings are poorly attended. Most people go to other dorms when they want to see friends. In the semester and a few weeks that I have lived here, I have only talked to fellow residents and my roommate. For further comment on the dorm’s apparent disconnect, I spoke again with Joshua.

“I really like it here at Richmond Hall; I like everyone I meet. I do wish there were more ways to meet people.”

But perhaps even this criticism is misplaced.  The other night, while I was waiting in the lobby for my Domino’s delivery and the rest of the hall was empty and quiet, I listened in on one of the hall council meetings that I had never attended. 10 students took turns discussing what they wanted to accomplish for the upcoming semester and what they wanted to improve on from the last. I got my pizza and found that two of their ideas stuck with me: they want to increase other residents’ involvement in hall council, and they want to make sure the dorm’s condition improves for the next generation of students that will live there.

So, maybe it’s just a matter of time.