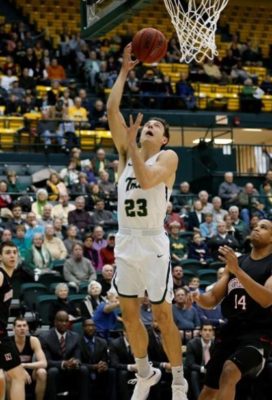 William and Mary concluded its latest three-game road trip with mixed results, losing to Towson 96-82 in overtime Thursday before defeating UNC Wilmington 84-81 on Saturday. The Tribe remains tied atop the Colonial Athletic Association standings with College of Charleston and Northeastern.

Seeking to avenge its 99-73 home loss to the Tigers 12 days prior, the College (14-7, 7-3 CAA) came out of the gates hot on Thursday against Towson (15-8, 5-5), shooting 56 percent from the field in the first half. Sophomore guard/forward Justin Pierce led the way with 16 of his team-high 27 points in the opening 20 minutes, knocking down six of his first seven shot attempts.

Despite the Tribe’s excellent start on offense, the Tigers stayed in the game with some strong shooting of their own, Towson nearly matching the College with a 53 percent first half field goal percentage. The Tribe headed into the locker at halftime with a 47-37 lead, in prime position to claim a fifth straight CAA road win.

Towson continued to shoot the ball well in the second half, shooting 57 percent from the field in the period, gradually chipping away at the Tribe’s lead. Tigers guard Zane Martin caused the College defense all sorts of problems, scoring 16 of his game-high 35 points in the second half.

To make matters worse for the Tribe, sophomore center Nathan Knight fouled out with just under 5 minutes left in regulation, leaving the College without its most skilled post player down the stretch. A Martin free throw with 12 seconds to play tied the game at 79, eventually sending the game to overtime when the Tribe failed to score on the ensuing possession.

The Tigers blew out the Tribe in the five-minute overtime period, outscoring the College 17-3 to finish off a misleadingly lopsided 96-82 victory. Martin scored 10 of Towson’s 17 overtime points to help the Tigers claim their season sweep of the College.

“Our guys played their hearts out tonight,” head coach Tony Shaver told Tribe Athletics afterwards. “We battled hard, we played hard enough to win this ballgame, no question about that. It’s unfortunate that down the stretch we couldn’t get the key stops to put the game away … if we’re gonna be a championship-caliber team, we’ve got to learn to get the key stops.”

Their streak of four consecutive road victories snapped by Towson, the Tribe got back to winning ways Saturday night against reigning CAA champions UNC Wilmington (7-15, 4-6). The College once again got off to a strong start on offense, shooting 55 percent in the first half on its way to a 40-31 halftime lead. Senior guard Connor Burchfield scored 15 of his 23 points in the period, knocking down all five of the Tribe’s first half three-pointers.

The Seahawks responded by scoring 50 points in the second half, shooting over 51 percent from the field in the final 20 minutes. UNC Wilmington guard Jordon Talley had a stellar second half, recording 17 of his game-high 25 points.

However, unlike Thursday’s loss to Towson, the Tribe was able to gut out a hard-fought road win. Pierce nearly matched Talley with 16 second half points of his own (finishing with 23 total), while Burchfield scored the College’s final six points to help seal the 84-81 victory. Talley’s last second attempt to send the game to overtime clanked off the rim, the Tribe celebrating a seventh conference win.

The victory also took on historical significance for senior guard David Cohn, who became the Tribe’s all-time assists leader with nine on Saturday, bringing his College career total to 417.

“He’s been a great leader for our club this year,” Shaver said of Cohn, per Tribe Athletics. “His communication coming off the floor and on the floor after timeouts is really impressive. I’m so proud of him for breaking the assists record, and to do it in three years is pretty amazing … love the ball in his hands, I can tell you that.”

The Tribe returns to action next Thursday with a home contest against Elon at 7 p.m. The College defeated the Phoenix 80-73 on January 20.