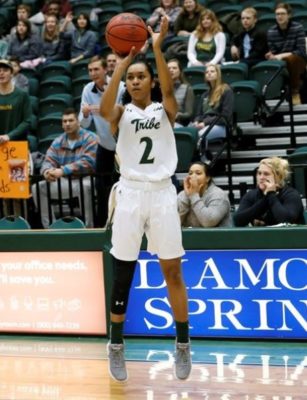 Friday, William and Mary welcomed the College of Charleston to Kaplan Arena for a Colonial Athletic Association matchup. The College had dropped two games the previous weekend and was looking to get back on track in conference play. The Tribe trailed the hot-shooting Cougars at halftime, but stepped it up on defense in the second half and ran away with a 79-66 victory.

“Obviously after last weekend, we’re real happy to get back in the win column,” head coach Ed Swanson said.

The College (14-6, 5-4 CAA) jumped out to a quick 7-0 advantage in the first 90 seconds of the game. Senior guard Jenna Green scored five of the seven points, including a three-pointer in the opening seconds. The Cougars (5-15, 1-8 CAA) responded with five points of their own, but the College quickly answered to give the Tribe a 13-5 edge with 5:27 remaining in the opening quarter. The final four points of the Tribe’s 6-0 spurt came off of steals by junior guard Bianca Boggs. Despite leading for the entirety of the first quarter, the Tribe clung to a slim 20-18 advantage after ten minutes of play. The Cougars heated up in the last five minutes of the quarter to prevent the College from stretching its lead.

The Cougars continued their hot shooting in the second quarter, as they took their first lead of the evening on a three-pointer by guard Cailin Dorsey. Boggs briefly gave the Tribe the lead back before Dorsey buried another trey to put the Cougars up 24-22 with under eight minutes to play in the half. Dorsey was on fire in the first half, scoring 14 points and connecting on four three-pointers. With the College going nearly three minutes without a point, the Cougars were able to stretch their lead to six before Boggs drilled a three to bring the Tribe back to within one possession. The Tribe managed to whittle the lead down to one with just over a minute left in before the break, but five consecutive points from Dorsey gave the Cougars a 41-35 advantage at halftime.

“I thought we had a real tough defensive first half… so at halftime I really challenged the kids defensively,” Swanson said.

The Tribe opened the third quarter shooting well as the College looked to rally and avoid extending its losing streak to three games. Sophomore guard Nari Garner, making her first start of the her career, buried two threes in the first couple minutes of the quarter to narrow the deficit to two points. Green assisted on both threes, two of her 11 assists on the night. She finished with a double-double with 10 points in addition to her assists.

“People were knocking down shots tonight… all around people were ready to play,” Green said.

Two minutes later, sophomore forward Victoria Reynolds tied the game at 45. She also had a double-double, with 15 points and a game-high 18 rebounds.

“I think she [Reynolds] has a great nose for the ball,” Swanson said.

Boggs added a layup of her own on the fastbreak with just under five minutes to play in the quarter to give the College the lead for the first time since early in the second quarter. Later in the quarter, clinging to a one-point advantage, the College went on a 6-0 run, capped by two buckets from senior center Abby Rendle. After a slow start, she finished one rebound away from a triple-double, racking up 12 points and 11 blocks. The Tribe held the Cougars to 10 points in the quarter and led 56-51 entering the final 10 minutes.

The Tribe began to put the game away in the opening minutes of the fourth quarter. Green scored and then Boggs and Garner each hit threes to give the College a 13-point edge, its largest of the game at that point. Boggs led the Tribe in scoring with 26 points and also contributed in several other ways. She also had seven rebounds, seven steals, and six assists.

“I was just trying to calm myself down mentally and slow the game down to make the right decisions,” Boggs said.

The Cougars cut the deficit to nine points on multiple occasions in the final quarter, but the College’s lead was never in danger as the Tribe got back in the win column with a 79-66 victory.

With the victory over the Cougars, the senior class of Green, Rendle, and forward Jeanne Gaumont became the winningest class in school history with 63 wins.

Two days later, on Sunday afternoon, the College returned to action with a pivotal game against Hofstra. The Tribe was looking to bounce back from its 11-point loss to the Pride just nine days earlier in New York. Despite a slow start offensively, the Tribe used a stellar defensive effort to split the season series with the Pride with a 63-53 win.

The College fell behind early, as the Pride (10-11, 4-6 CAA) scored the first six points of the contest. Green scored the first four points for the College to help the Tribe get back on track, but the it still never led in the first quarter. However, strong defense by the College kept the game close even as Boggs and Rendle were held scoreless in the first quarter. Green scored eight of the Tribe’s 11 points in the opening quarter, including the last four to cut the deficit to 12-11 going to the second.

“I needed to look to score a little bit more this game,” Green said.

After guard Olivia Askin drained a three early in the second quarter for the Pride, Garner answered with a triple of her own to pull the college back within one. Over the next five minutes, the Tribe held the Pride scoreless and went on a 10-0 run and took its first lead of the afternoon. Boggs had four points in this stretch to end her drought to open the game. Freshman center Gabby Rogers also scored during this run and played 16 minutes for the game. The College took a 27-22 advantage to the locker room after holding the Pride to 10 points in the second quarter.

The College scored the first six points of the second half to propel it to a double-digit advantage. Garner hit a three during this run, part of her 10 points and seven rebounds for the game. With four minutes remaining in the quarter, the Pride had narrowed the gap to five points, but Green and Boggs began to take over the game. They combined for the last 11 points of the quarter for the Tribe, helping the College to a 46-37 lead going to the fourth quarter. Boggs had seven points in the final four minutes of the quarter, including another three-pointer. She was 4-7 from deep on the afternoon.

Reynolds scored the first four points of the final quarter for the College, before Boggs hit another three to stretch the lead to 12. Reynolds had 11 points, eight rebounds, and seven steals in the College’s victory. With Rendle under the weather, Reynolds and Rogers played well inside to complement Boggs, Green, and Garner on the perimeter. Near the midway point of the fourth quarter, Garner hit her third three of the contest to give the College a 13-point advantage and essentially put the game away. Fittingly, Boggs scored the final five points for the College. After a slow start, she scored 24 points, 17 of which came in the second half. She also had eight rebounds and four blocks to round out another complete effort by the junior guard.

“I think I was going too fast and try to push the issue too much… I guess I did flip a switch,” Boggs said.

This weekend, the College will round out its three-game homestand when it faces in-state rival James Madison on Friday night. The Dukes are undefeated in conference and the Tribe will be looking to pull off the upset and stretch its winning-streak to three games.

“It’s exciting, we love to compete… we’re chasing them [James Madison] down… we’re looking for a great opportunity for us to compete,” Swanson said.

On Sunday, the College will go back on the road to take on Towson. In the two teams’ first matchup this season, the Tigers narrowly defeated the College at Kaplan Arena, 67-66.