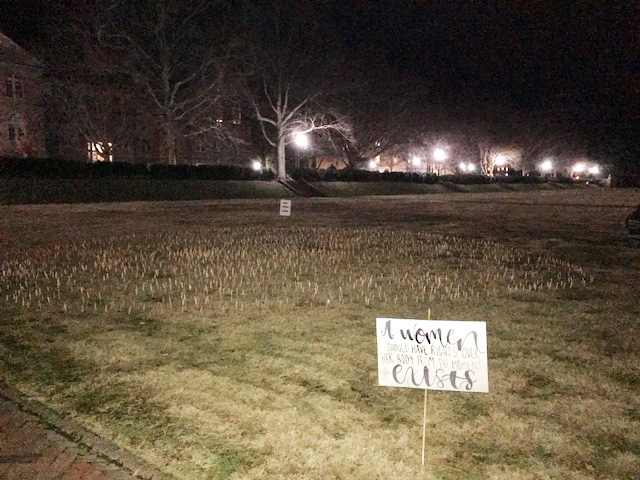 Let me start out by stating the obvious: I understand that abortion can be a controversial subject. However, as a member of the Voices of Planned Parenthood: Generation Action group on campus (VOX), I don’t see abortion as a debatable topic. The issue of abortion is an issue of health and reproductive rights, and when we call abortion into question, we jeopardize the immediate lives of all people with uteruses.

When I heard about the pro-life group’s popsicle stick display, my heart dropped. I avoided the Sunken Garden Jan. 21 because I knew I wouldn’t be able to stomach whatever the Advocates for Life group set up. When I heard that someone took it down, I felt such a sense of relief. Before anyone comes out of the bushes screaming about First Amendment rights or how vandalism is wrong, I am neither celebrating vandalism nor objecting to the fact that Advocates for Life wanted a platform, but rather to how they chose to commemorate Roe v. Wade.

Setting up thousands of popsicle sticks to represent “lives lost” since abortions were legalized is cruel and oversimplifies the already complicated issue of abortions. Firstly, we have no scientific consensus on when life starts, and considering that 92 percent of abortions occur in the first trimester, at or before 13 weeks, the argument that a cluster of cells counts as a fully human life is even weaker.

The display also does not take into account how many lives were saved due to abortions. Yes, sometimes pregnancy happens between two financially stable, ready and consenting adults who are happy to see that little plus sign, but life is not always that simple. Pregnancy also happens as a result of rape and incest. What about people with disabilities who have a higher health risk if they carry a pregnancy to term? What about low-income people that already have families and can’t afford another child? This is by no means an exhaustive list of people who absolutely need access to abortions, but for people in these and similar situations, abortions save their lives, as well as their families.

There were so many other ways that Advocates for Life could have exhibited its pro-life agenda without pointing to those who have had abortions as directly responsible for the loss of life. They could have made signs advocating for better access to birth control, paid family leave or called for reforms to the foster care system, all of which would either lower unwanted pregnancy rates or create a better situation for parents and children. Even something like celebrating the thousands of restrictive abortion laws passed since Roe v. Wade, which is over 1,000, would have been better than highlighting “lives lost.”

I am particularly angry because in October, I had a medical abortion at eight weeks. In December, I spoke publicly about it for the first time at VOX’s “Pro-Choice Talk,” which was incredibly difficult for me to do. According to the Advocates for Life display, I am directly responsible for one of those popsicles, or “lives,” and that is incredibly harmful and triggering for me and other students who have had abortions. Clearly, neither the Advocates for Life group nor whatever William and Mary administrator approved the display considered the harmful effects of the display on those like me who are struggling to reconcile their choices to get an abortion.

If the goal is to actually advocate for life and not to shame those who’ve received abortions, which is what I suspect the goal of its display was, I invite the Advocates for Life group to come to a VOX meeting. We discuss reproductive rights, intersectional feminism and we write to our representatives and participate in activism. We meet Tuesdays at 7:30 p.m. in Blair 201.