Although all four participating professors garnered many laughs and cheers from the audience, chemistry professor Doug Young was declared the winner of this year’s Raft Debate Thursday, March 15. The Chesapeake auditorium in the Sadler Center was filled nearly to capacity with high-energy students, and the casual atmosphere was maintained by a variety of costumes and props.

Dean of Graduate Studies and Research Virginia Torczon, who judged the event, introduced the professors at the beginning while sporting a white powdered wig. She emphasized the importance of the inflatable raft on stage and explained the rules. Each professor was given seven minutes to present their initial case and then three minutes each to respond to each other. After that, audience questions were taken, and a sound meter used to determine the winner.

History professor Fabricio Prado, representing the humanities, was the first to present his case. Clad in an all-black, steampunk-esque costume and utilizing a synthesizer, he emphasized the need for human beings to make sense out of the mess of scientific information.

He then explained that allowing the sciences to exist unchecked and without ethical considerations serves to the detriment of all humans.

Prado said that without the concept of history, one loses the greater context of our existence.

“We can rebuild technology,” Prado said. “But history, my friends — our origins, the stories from your ancestors, all the African diaspora, all the movement of people, the challenges, our mistakes — if you lose that, you cannot recreate it.”

Government professor Jaime Settle, representing the social sciences, spoke next, preceded by enthusiastic cheers of “settle this debate” from the crowd and several signs sporting slogans. She began by thanking her “campaign staff” of cheering students and launching into an impression of U.S. President Donald Trump.

“Nobody has more respect for the humanities and social sciences [than me], trust me on this,” Settle said. “Brilliant people, great people, no one loves it more than I do.”

Her argument focused on the importance of government to humanity and the ability of social sciences to design institutions and processes to best serve people.

Young spoke next, arguing for the natural and computational sciences. He began his speaking time by using a flame to pop an inflated balloon while declaring, “Science.”

“That was powerful, and painful, but I just created water from fire, and that is the power of science,” Young said. “When asked, ‘Why should you save the natural and computational sciences?’ there really is only one answer here. Because science.”

Young elaborated with references to DJ Khaled to describe science as foundational and an image that combined the faces of Lord Voldemort and Trump to show where humanity would be if left with only the arts and social sciences.

Young described science as the key to civilization, something that gives us some of the most important technological advances in society.

Computer science professor Pieter Peers, who played the devil’s advocate, took the stage last with an attempt to convince the audience that no discipline should be saved.

“I didn’t know what the Raft Debate was,” Peers said. “I was told this was a battle of wits and intelligence. Anyway, so apparently three professors are stranded together on a deserted island. Well, that doesn’t surprise me.”

He went on to discuss his confusion over the nature of the Raft Debate, explaining what he would do as a student if his professors were actually stranded.

“If I heard that one of my professors was stranded on a deserted island, I would go and party,” Peers said. “I would get a drink. But then it hit me. The drinking age in this country, it’s 21.”

Peers moved into his argument, drawing from a boy’s survival guide, saying that the only rational and ethical decision was to leave them all so they could work together to survive.

The rebuttals passed quickly, with the professor trying to refute each other’s arguments and improve their own.

Settle emphasized the way that social scientists ask questions and its relevance to current events. Young used his rebuttal time to use dry ice and flowers to demonstrate the future without science.

“Science is much like my favorite person, Santa,” Professor Young said, changing into a Buddy the Elf costume, “Because no matter if you believe in him or not, he is always there for you, and he always brings you wonderful presents just like the natural sciences.”

“Science is much like my favorite person, Santa,” Young said, changing into a Buddy the Elf costume. “Because no matter if you believe in him or not, he is always there for you, and he always brings you wonderful presents just like the natural sciences.”

After audience questions, Torczon used a sound meter to determine the winner of the debate. Despite the urgency of Settle’s advocates and Peers’ children’s use of air horns, the natural and computational sciences, as represented by Young, were declared the definitive winner of the Raft Debate. 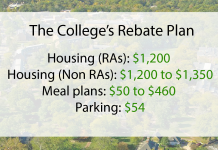 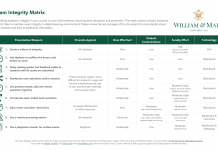