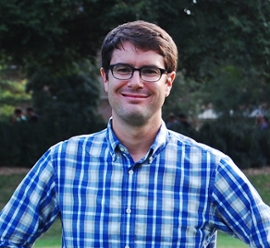 A 2014 addition to the College of William and Mary’s government and international relations programs, professor Marcus Holmes said he works to bring a bright energy to the Williamsburg campus.

“I get excited in class … I often find the material that we’re teaching to be intrinsically interesting,” Holmes said. “So yeah, I sort of jump around and I yell a lot, but that’s just because I find the stuff that we’re doing super interesting and exciting.”

Along with that, Holmes said he believes that teaching is a give and take.

I respond to the enthusiasm of the students,” Holmes said. “So, if the students are interested in something, that gives me energy, so it’s like a feedback loop. I’m a big energy person. I don’t want to be boring. If I’m boring, then my students are going to be bored, and I’ll be bored, and that’s not fun. I’d rather be a little more interesting, a little more energetic and entertaining, if I can, and then I’m more into it and so are my students.”

“I respond to the enthusiasm of the students,” Holmes said. “So, if the students are interested in something, that gives me energy, so it’s like a feedback loop. I’m a big energy person. I don’t want to be boring. If I’m boring, then my students are going to be bored, and I’ll be bored, and that’s not fun. I’d rather be a little more interesting, a little more energetic and entertaining, if I can, and then I’m more into it and so are my students.”

This energy and fervor for teaching and the subject material extends into Holmes’ work as a researcher. He has been published in nearly a dozen academic journals, has a book coming out in 2018 and travels around the world for academic conferences.

This past year, that meant traveling around the United States and traveling to Scotland, England, Hong Kong and Taiwan.

Holmes’ interest in the study of international relations began with Russia.

“I started college in 1998, and the Cold War was obviously over, but Russia was still in this liminal zone,” Holmes said. “I got super into Russian culture and literature. I was just a really big Russia guy.”

After graduating with his bachelor’s degree from the University of Virginia, Holmes began working at Deloitte.

“It was just after September 11, and Deloitte had just been awarded a big contract to work for the Department of Homeland Security, which at the time didn’t exist,” Holmes said. “So, Deloitte’s contract was to basically set up a government agency from the ground up. And I was put on that project right from the first day that I started my job.”

After two years, Holmes realized two things about himself: one was a lack of interest in consulting work, the other was his budding interest in how government works.

“One of the things that irritates me is that government workers oftentimes are stigmatized as lazy and bureaucratic, nine-to-five types of people,” Holmes said. “I worked alongside these people, and in my experience, that’s not the case. The problem they have is that they’re highly constrained by the structure of the government. There’s a level of bureaucracy surrounding every single thing they want to do. And so, it gave me an appreciation in understanding that the government is a highly sophisticated, smart thing.”

Looking back, Holmes said his path makes perfect sense, but he emphasized that at the time, this was not the case.

“There’s a tendency to think back on your life and make it sound like it was this nice, neat, linear thing, where the dots all connected perfectly,” Holmes said.  “And it wasn’t like that.”

At the same time, Holmes said he is grateful that his path in life was relatively smooth.

“I’ve been incredibly lucky in a lot of regards,” Holmes said. “Academia, especially now, is notorious for being very difficult to get a job in. I’ve been lucky in a sense that, when I’ve needed a job, there are jobs available and that I’ve been well qualified for, and I’ve been lucky enough to get them.”

Before coming to the College, Holmes worked as a professor at Fordham University, which he liked as a liberal arts institution, but wished it placed a greater emphasis on research.

“I wanted small classes, I wanted a nice college environment, collegial colleagues, smart students and a liberal arts kind of feel, but with more of a research component,” Holmes said. “Honestly, that doesn’t exist in too many places.”

The primary reason for the change of scenery, however, was Holmes’ new family.

“We have two children, a four-year-old and a six-year-old, just complete handfuls,” Holmes said.

New York was not the place for him to raise a family, but to Holmes, Williamsburg is perfect.

“The university campus is basically like my kids’ backyard,” Holmes said. “Essentially, it’s their playground. Especially in the summertime when there’s fewer people around, we’ll just go to the Sunken Garden and just play around and go through the Matoaka trails.”

The campus is also the perfect place for Holmes’ passion for running. He often shares his routes with students, and always wants to hear about a new route.

Career wise, Holmes’ goals revolve around his students. As part of his job at the College, Holmes works as the co-director of the Social Science Research Methods Center, where he directs the Political Psychology and International Relations lab.

He said he especially likes to work with freshmen and sophomores, both to fill the niche of early research opportunities and to provide a low-risk way for students to understand the research process and get experience.

“I would really like to see some of my students go on to publish their research or continue their research in some capacity,” Holmes said. “So, if 20 years from now, I get a letter from a student who said, ‘I just want to say that the experience I had in my freshman year or sophomore year of college — when I took this lab with you and started working on this — that that was helpful for me with what I’m doing now.’ That would be awesome.”