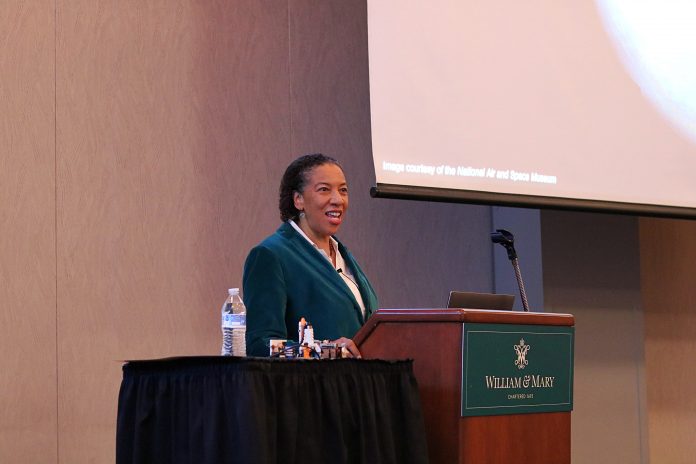 In celebration of the College of William and Mary’s “100 Years of Women” initiative and the United Nations International Women & Girls in Science day, the College’s Center for Geospatial Analysis invited geographer and oceanographer Dr. Dawn Wright to lecture on the significance of marine mapping and female scientific contributions in a presentation titled “Discovery… Technology… Hope.” Throughout her presentation, Wright, a geography and oceanography professor at Oregon State University and chief scientist at leading geographic information systems technology company Esri, explored groundbreaking discoveries related to ocean-mapping and its applications with modern technology in an attempt to relay a message of hope for future innovation and female involvement within the field.

Wright began by emphasizing the importance of marine exploration and the ocean in general, highlighting its key role in supporting human life through its production of oxygen, regulation of weather patterns and climate, production of energy and economic contributions. However, she pointed out that much of the nation’s population, particularly those living inland, are unaware of these important contributions, and their oceanographic knowledge is shallow at best.

“I talked to people in Colorado and Kansas and landlocked areas of the world where the ocean for them is out of sight, out of mind,” Wright said. “Even if they have the chance to see the ocean, to visit it, they think only about the surface, and we are still woefully unaware of all of the complexities and the amazing things that are beneath the surface of the ocean.”

Though the general population’s understanding of marine life is minimal, Wright acknowledged that marine knowledge within the scientific community is also limited because many aspects of the ocean remain unknown. In fact, according to Wright, only three people have visited Challenger Deep, the deepest known point on Earth, and only about nine percent of the planet has been mapped and visited at the same level of detail as our terrestrial areas.

Despite the fact that only a minute portion of the planet’s oceans have been mapped, the mapping that has been conducted is highly detailed thanks to the usage of satellite and sonar technologies. Furthermore, she emphasized that even though marine exploration is difficult, it is not at a standstill as various agencies, including NASA, continue to contribute to oceanic mapping efforts and the development of new technologies.

According to Wright, the developments and technological advancements made in conjunction with ocean-mapping have valuable applications in tracking and preventing the effects of pollution, such as the spread of debris caused by the 2011 tsunami in Japan and allowing for the creation of “smart maps.”

“These kinds of maps are changing what we’re able to measure, how we’re able to analyze these measurements, how we plan and design areas, and ultimately how it is we manage and understand what we’ve mapped,” Wright said.

Furthermore, in honor of the College’s “100 Years of Women” initiative and UN International Women and Girls in Science Day, Wright dedicated a significant portion of her lecture to female scientists, paying tribute to the women that have inspired her and their respective scientific discoveries and impacts within STEM disciplines.

In respect of February being Black History Month, Wright first highlighted the contributions of mathematicians Mary Jackson and Katherine Johnson along with mathematician, engineer and computer scientist Dorothy Vaughn who, recently featured in the film “Hidden Figures”, played major roles in NASA’s space program by calculating flight trajectories and landing sites. Also featured was geologist Marie Tharp, whose accomplishments include discovering the rift valley of the Mid-Atlantic Ridge and is considered to be the inventor of marine cartography with her work still influencing modern-day ocean mapping.

Wright expressed her admiration for marine biologist, author, lecturer and explorer Sylvia Earle,who was the first woman to lead a team of female aquanauts to the bottom of the ocean in the Tektite Project as well as the first female chief scientist of the U.S. National Oceanic and Atmospheric Administration. She also expressed admiration for Cindy Van Dover, a formerbiology professor at the College and the first woman to head the Duke University Marine Lab and to be a certified pilot of ALVIN, a deep-diving submersible.

Wright concluded that while obstacles to female involvement in STEM remain, the scientific environment has grown significantly more welcoming of women contributions over the past few decades and that the future for women within the field looks promising.

“I thought it was really cool how she talked about the inspirational aspects of science and GIS and whatnot because that’s an important part, even if you’re not a scientist, if you’re just a citizen,” Tsow said. “… It’s easy to get discouraged so it was really cool to hear her address that sort of emotional aspect of it and hear from somebody who knows what they’re talking about that there is still hope and people should keep on trying.”

Grace Grimsley ’19 and Rachel Layko ’19 shared this sentiment, appreciating the hopeful spirit of Wright’s presentation and her optimistic attitude regarding the future of GIS, its applications and female involvement within the field.

“I got to hear Dawn speak a couple years ago because I went to the Oceans Conference that’s at the Esri headquarters so I got to hear a little bit of what she said then, so it was really neat to hear more of her backstory and how she got to be where she is,” Layko said. “I’m hoping to combine GIS and marine science so it’s neat to kind of see what that looks like and it’s neat to have someone that’s working at the intersection of GIS at a corporate setting but also working with scientists as well to kind of bring the two together.”

Grimsley agreed with Layko, adding that she found the stories of female success shared during the lecture particularly encouraging.

“It was very inspiring,” Grimsley said. “We both have been working in the GIS field for a little bit now, and it was just cool to hear from somebody that was so high up and hear their inspirational stories. She’s so positive too, about the field as a whole, and I think that’s really cool.”