Sunday March 10, the 2019 campaign season for Student Assembly kicked off with candidates rolling out their campaign announcements on social media.

There are two tickets for SA President and Vice President: Class of 2020 President Kelsey Vita ’20 is running with Senate Chair Ellie Thomas ’20 as her Vice President, and Class of 2021 President David DeMarco ’21 has entered the race with first-time candidate and running mate Nyla Pollard ’21.

Both Vita and Thomas have served as members of SA since their freshman year. Vita said that during that time, she believes she has seen SA go from “just throwing money at things” to having much more policy-driven approaches. 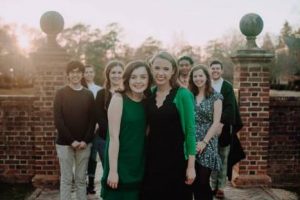 Much of their campaign platform revolves around facilitating a campus community where all students feel safe, both physically and mentally.

“There’s certainly an aspect to that where you feel safe walking home at night, you feel safe crossing the street, but it’s not just about that,” Vita said. “Safety is about knowing that you have access to proper mental health resources. Safety is about knowing that when you file a Title IX report, it will be handled properly. Safety is knowing your rights as a student on this campus, and safety is really a lot more encompassing than that.”

DeMarco, who has served as President of Class of 2021 since his freshman year, decided to run for SA President in hopes of fostering an SA governance that stays relevant and in touch with the College’s student body. In his two years in SA, DeMarco has attended different club meetings as well as sent out surveys to the student body, asking them what changes they would like to see on campus. 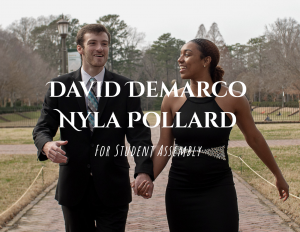 “I’ve spent the entirety of my term going out and really trying to stay in touch with all the students,” DeMarco said.

According to DeMarco, he decided to approach Pollard, who has no prior SA experience, to run with him in order to imbue his campaign with ideas from the student body at large.

“She is outside of Student Assembly and she is really active in the community, so she really also is in touch,” DeMarco said. “The first time I met Nyla, we had a COLL 150 together and when I first met her, it was just incredible. I had never met someone so kind and affable and whenever she would like raise her hand in class, even if everyone was super drowsy, she would always be attentive and listening.”

DeMarco and Pollard have centered their campaign on listening to other people’s stories and experiences with a focus on improving representation on campus.

“A lot of his huge focuses are on diversity and inclusion, and actually caring about what our class body wants…” Pollard said. “When he asked me, I was kind of like ‘Of course I’ll run with you! There’s no one else I would rather run with than you.’”

As a nod to Pollard’s position on the women’s basketball team, DeMarco and Pollard have created a five point platform entitled “The Starting Five” which focuses on parking advocacy, reviving representation, curtailing polarization, food reform, and mental health progress. Their campaign also included increasing the number of therapists available in the counseling center.

For Vita and Thomas, mental health is also at the forefront of their campaign. If elected, they hope to work with University Advancement the Parent and Family Counsel to set up an endowment to fund more counselors in the College’s counseling center. They would also look to bring technology called Callisto to campus, a software which has the ability to time-stamp a sexual assault if the victim records it, all while looking for repeat offenders and allowing the victim to remain anonymous unless they choose to come forward.

“This could be really impactful on campus in helping survivors, and also with finding perpetrators and protecting people, and that kind of follows the theme of keeping people safe on campus,” Thomas said.

They also want to advocate for a uniform expectation when it comes to faculty hiring practices across departments, such as ensuring that there is a diversity committee in each department and exploring the possibility of having potential new faculty members give a trial lecture to students before they are hired.

If elected, Vita and Thomas hope to reform SA finance, and make it a less difficult process for student groups to ask for funding for events by being more proactive about displaying their resources to students. They also would like to enact a “price-per-head” policy when groups seek event funding to ensure that events are well attended and money is being allocated fairly.

Vita and Thomas are also looking to improve dining services for students by advocating for the end of calorie count displays in the dining halls, and instead allowing that information to be viewable online for students who explicitly wish to see it.

“That can be kind of triggering for people with eating disorders…we still need to have conversations about the feasibility of it.”

“That can be kind of triggering for people with eating disorders…we still need to have conversations about the feasibility of it,” explained Vita.

They are also looking about the possibility of having a food truck which would accept food swipes near Swem.

Improving dining services is also a priority for DeMarco, who has recently paired up with Sodexo USA to provide better food items to the College’s dining halls as well as reviving the the Tribe Truck, as students will be allowed to use meal swipes rather than Flex.

DeMarco and Pollard are also looking toward improving parking for students on campus. As a commuter herself, Pollard wants to advocate for reorganization of the parking spots and the ticketing policy on campus, something that she believes has often been looked at as an unsolvable problem.

Pollard believes that both she and DeMarco will bring a fresh energy and different perspectives to SA, as she is a student of color on an athletic team and Dave is an experienced member of SA and a part of Greek life.

“In terms of diversity, we are a very silent campus on a lot of things because I think a lot of people are scared to speak up. I want to help foster those conversations.”

“In terms of diversity, we are a very silent campus on a lot of things because I think a lot of people are scared to speak up,” DeMarco said. “I want to help foster those conversations.”

The following is a complete list of the other candidates for each position in SA.  The candidate for the Class of 2020 President and Senators are running uncontested for the positions.