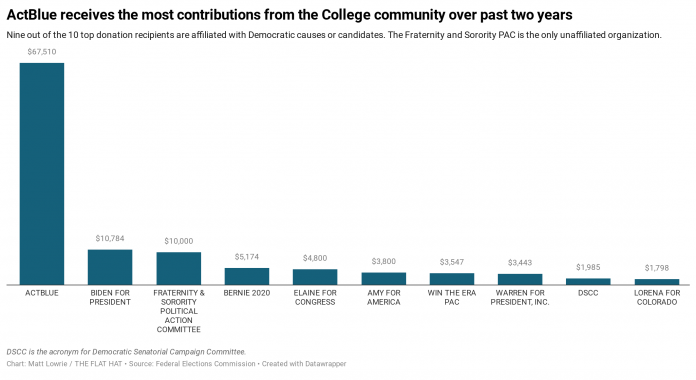 According to Federal Elections Commission data, College of William and Mary employees cumulatively donated $127,380 over the past two years to political campaigns and interest groups with the median donation being just $10. Donation rates in 2020 have already outpaced contributions from College staff made in 2016 during the last general election by more than $10,000. An overwhelming majority of donors chose to support Democratic candidates and political action committees (PACs).

Using publicly accessible FEC data, The Flat Hat compiled data tracking political donations from individuals who listed the College as their employer. The Federal Elections Campaign Act states that individuals donating to candidates and PACs should provide information about their employer if their donations exceed $200 during a calendar year, though many include this information on smaller donations as well. Between 2019 and 2020, records indicate that 505 individuals listed the College as their employer on donation forms, which include student employees, non-academic staff and faculty.

Since Jan. 1, 2019, College employees have contributed to campaigns and PACs. A sizable portion of this amount went to 2020 Democratic presidential candidates and their affiliated committees, many of whom launched their primary campaigns last year.

Among these candidates, former Vice President Joe Biden raked in the most money from College employees, who gave $10,784 to his campaign since 2019. Within the same timeframe, Sen. Bernie Sanders earned $5,174 from College staff, and Sen. Amy Klobuchar came in third place with $3,800, of which $2,700 came from a single 2019 donation from former adjunct faculty member and former FBI Director James Comey ’82.

The most popular recipient for donors is ActBlue, a non-profit organization that connects Democratic and progressive causes with individual online donors. During the past two years, College employees have donated $67,510 to ActBlue, eclipsing the second most popular recipient Biden for President by more than $50,000. Since Jan. 1, 2015, ActBlue has received nearly $125,000 in donations from College staff, comprising about 55% of all donations in the past five years. College employees have cumulatively donated over $305,000 over this same period of time. Between 2019 and 2020 donations to ActBlue nearly doubled among College employees.

Other notable recipients in the top 10 list include Elaine for Congress, a committee set up on behalf of freshman Democratic Rep. Elaine Luria, whose congressional district includes Williamsburg and the College. The only non-partisan recipient ranking in the top 10 is the Fraternity and Sorority Political Action Committee, which lobbies on behalf of Greek organizations at the federal level.

Government professor and James City County Board of Supervisors member John McGlennon said that donations to candidates and PACs are just one of the ways that College faculty members, as well as the general public, have increased their political engagement with campaigns in recent years.

“A clear trend over the past several years, and especially since 2016, has been increased activism among the general public,” McGlennon said in an email. “Activism of all forms are up, whether donating and working in campaigns, marching in support of causes or to protest policies or actions, and almost every other way. Faculty and staff at William & Mary, and universities generally, have been among those who are increasingly active.”

McGlennon also said that donations to Democratic causes and candidates have become dominant among College faculty based primarily on two demographic and political trends: the College’s academic staff has gotten younger who tend to lean more liberal than older generations.

Additionally, McGlennon said that conservative staff members at the College have struggled to embrace contemporary Republican candidates on account of their attitudes towards issues such as climate change and the pandemic, which weakens the incentive to financially support these candidates’ campaigns.

“… Part of this is a reflection of newer faculty, who represent younger age cohorts which are generally more Democratic, and part is due to a widening divide between the parties on both educational attainment levels and acceptance of science,” McGlennon said. “So some of the change is due to younger faculty, but the other part is that some formerly Republican faculty have left the party due to the anti-science rhetoric of Republican leaders on COVID-19, climate change and other issues.”

FEC data provide some empirical evidence for McGlennon’s comments. College employees have only donated $391 to Republican candidates and PACs in the past two years, a meager .3% of total donations. These donations went to WinRed, a fundraising platform affiliated with the Republican National Committee.

In addition to contributions to explicitly pro-Republican platforms, College staff also donated $811 to the Lincoln Project, an organization created in late 2019 by Republicans who oppose President Donald Trump and his affiliates. Combined, these platforms have accrued only slightly more than $1,200 from College staff in the past two years — substantially less than amounts received by comparable Democratic groups.

A lack of financial support for Republican causes among the College’s staff could also reflect Virginia’s increasingly blue tint in national politics. Biden is expected to win Virginia with little difficulty Nov. 3 and barring an unexpected election result for incumbent Sen. Mark Warner this cycle, all statewide elected officials will continue to be Democrats come next January. This pattern suggests a broader political shift in the Commonwealth that extends beyond the College — though many similar trends are visible in Williamsburg and James City County.

Methods: Using contributions data from the Federal Elections Commission, The Flat Hat compiled and analyzed political donations from all individuals who listed the College of William and Mary as their employer between Jan. 1, 2015 and Sept. 30, 2020.