Tuesday, Oct. 20, in a virtual homecoming event titled ‘Untangling the Train Wreck,’ the College of William and Mary government department convened a panel of professors to discuss the dynamics of the upcoming presidential election. The webinar-style event garnered the attention of over 300 attendees, consisting of alumni, faculty and students.

Government department chair Sue Peterson welcomed alumni to the homecoming event and expressed her appreciation for their flexibility.

“Like so many other things in 2020, this is probably not the homecoming that you imagined, but we’re glad that you’re making us a part of your homecoming regardless,” Peterson said.

“Like so many other things in 2020, this is probably not the homecoming that you imagined, but we’re glad that you’re making us a part of your homecoming regardless,” Peterson said.

The 90-minute discussion took on a wide range of questions and analyses regarding movement within the electorate, international implications of the election and early voting. Settle opened the floor by asking the panelists to explore the circumstances of the race.

“Think about a snapshot of the race on Oct. 20,” Settle said. “This has been an election that has changed so rapidly, and there are so many things going on that I think it’s important to establish what the state of the race is at this moment.”

McGlennon responded first by commenting on the lack of change within the electorate in spite of continuous developments in the race and condition of the country moving through a pandemic.

“The thing that stands out to me most about this election, and as you’ve noted I’ve been around for a fair number of these, is that amidst of all this chaos, the electorate has been remarkably stable,” McGlennon said. “People’s minds are made up. They are in almost every case indicating that they have already made up their mind. They are not likely to be swayed by any changes. Efforts to generate controversy seem to fall flat.”

A consistent and growing lead in polls for former Vice President Joe Biden and underwater presidential approval ratings led Israel-Trummel to comment on the interesting context of the race.

She remarked on President Donald Trump’s position as an incumbent during the COVID-19 pandemic, the administration’s response to a national emergency and the economic ramifications of the past 10 months.

“Since about April, we’ve had a majority of Americans who have not thought that the administration has handled the crisis appropriately, and that’s a really bad spot to be in for an incumbent candidate,” Israel-Trummel said.

As the panel turned to voting, McGlennon recognized the increased accessibility and opportunity for participation that comes with early voting that has coincided with impressive levels of engagement from the public.  Meanwhile, Israel-Trummel offered that early voting and mail in ballots bolster pandemic safety efforts by reducing crowding at the polls on election day.

“Part of what we’re seeing here is a remarkably high level of interest in this campaign,” McGlennon said. “The number of people who are indicating a likelihood of voting suggests that we’re going to see record turnout. We’re already seeing it in early voting.”

Subsequently, Tierney offered a foreign policy perspective on the race.

Tierney specified that scholars rarely believe individual leaders determine outcomes in the international arena. Instead, he pointed to shared norms, the balance of power and domestic institutions as indicators of foreign policy decisions.

Settle then asked the panel about their thoughts on election interference by foreign actors and how the electorate will respond to either candidate winning. Tierney, with the use of survey data, explained that of China, Russia and Iran, scholars across the country see Russia as the largest threat, yet believe election meddling will have a minimal or ineffective impact on the election results.

Tierney also outlined what he believed to be the most concerning factor about the electorate. Following interference in the 2016 election, public confidence in the outcome of the presidential race will likely be at an all-time low. He disclosed his worry for what will happen if people do not believe election results.

“Here is where I think we are in uncharted territory,” Tierney said. “I don’t think we know what happens when large numbers of U.S. citizens don’t trust the outcome of the election. It’s a much more dire circumstance.”

Israel-Trummel spoke on the predictions forecasted by national and state polling leading up to the 2016 election. She emphasized that national polls were correct in their estimation of the national popular vote while state polls faced several issues in predicting who would win the state.

“One of the problems was late breaking undecideds,” Israel-Trummel said. “Historically, undecided voters have split pretty evenly between candidates at the last minute, and in 2016 they actually broke decisively for Trump. One of the second big problems with 2016 polls was under inclusion of people without a college degree. It turns out that white voters without a college degree were substantially more likely to vote for Donald Trump.”

She concluded that polls for the 2020 election will be more accurate because of fewer undecided voters but maintained that polls are just that; they serve to offer predictions which may prove wrong in states with closer races. Israel-Trummel also revealed that new research says as people become more certain about election outcomes, they become less likely to vote and this may actually affect those same predicted outcomes.

Further discussion continued as alumni submitted questions to Settle. Panelists shared what polls and election information they were following, and what a transition of power may look like if Biden takes office. They also considered how political events shape their own teaching at the College.

Finally, the panelists, as well as Settle, offered contrasting views of how the past four years may affect the future of the United States’ political culture. Settle explained that polarization has been mounting for years even without Trump’s presidency and will likely continue to grow, even if it is more muted with a Biden presidency.

“Among young Republicans there is support for tolerance, for expansion of rights for underrepresented groups; there is support for climate action, and these may be consensus issues on which a President Biden may be able to move the country in a unified direction,” McGlennon said. 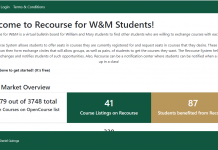