Content Warning: Readers should be advised that potentially upsetting subjects are discussed in this article.

I would like to quickly acknowledge that while we talk about abortion in terms of women’s rights, not all pregnant people are women, and we should not assume that identity. Here, I will say “people” and “they” when referring to those who are considering abortions, in order to include everyone affected by this debate and legal issue.

As I am sure every student at the College of William and Mary knows, there was much debate a few weeks ago on a public chalkboard after the College’s pro-life organization, Tribe For Life, covered it in various phrases supporting their viewpoint. It was soon after erased by pro-choice students, covered in pro-choice language, and the groups went back and forth a couple of times like that.

Tribe For Life publicly, on their social media, expressed their sadness and hurt that their words were erased. Tribe For Life said they wanted a discussion, but then promptly deleted any undesirable comments on their Instagram — not just the more aggressive ones, so that cannot be an excuse — and then went on to erase the pro-choice messages, which is exactly what they criticized other students for doing. Specifically, they wrote on Instagram, “erasing our opinions is unfair,” and I find that language is ridiculously one-sided. It is also unfair to the many students who have to walk by that board to see their rights and bodily autonomy diminished by dismissive phrases.

“People get abortions for countless reasons, and while it is never an easy choice, it is often the necessary one, based off the situation.”

Their dismissive and one sidedness are what upsets and bothers me so much about this debate. The original board spouted phrases such as the call to destigmatizing pregnancy.

People do not get abortions purely because people are judging them. Another phrase called for resources, but not every person who is considering an abortion is doing so because they are lacking resources. Arguments like these are skirting around the real issues. People get abortions for countless reasons, and while it is never an easy choice, it is often the necessary one, based off the situation. If a doctor is concerned about someone’s ability to survive pregnancy, possibly due to a preexisting condition or disability, or maybe due to a complication of the pregnancy itself, that is a completely valid reason to get an abortion. If a family cannot afford the costs that come with nine months of pregnancy — most importantly including medical bills, but not ignoring the costs associated with increased food consumption, maternity clothes, pregnancy products and everything they will need once the baby is born — that is a completely valid reason to get an abortion. If someone is raped, why should they be forced to deal with the trauma, triggers and emotions that come with that experience if they by chance fell pregnant? That is a completely valid reason to get an abortion. And I’ll say it: if a couple faces an unwanted pregnancy, whether it’s because they neglected to use birth control or if they did and it failed — which is far more common than schools and pro-life groups want users to believe — that is a valid reason to get an abortion. Families do not need to explain their reasons behind their decisions about their own bodies and lives to the government or various religious groups, especially not if the couple does not practice that religion.

We have separation of church and state. While some citizens of America may believe that life starts in the womb and everything has a soul, that is not supported by science or the law, and therefore, it should not be the basis of our legal system in this nation. Since many religions such as Islam and Judaism do not eat pork, imagine the outrage if pork consumption was illegal.

“face reality. If abortions are once again criminalized nationwide, people will still get abortions, they just will not be safe.”

Finally, face reality. If abortions are once again criminalized nationwide, people will still get abortions, they just will not be safe. We have all heard horror stories of at-home abortions, and by reversing Roe vs. Wade, those home procedures will once again become popular. Abortions will still happen. Those babies will never be born. The only difference is that their parents no longer have the protection that comes from proper medical care and the law. Is that really what you want?

Tribe For Life insists that they want dialogue, so here is my part of the dialogue. I am tired of having my voice, safety, certainty and rights taken away for the sake of other people’s values. I have seen people dismiss this topic all together, and to that I want to say that I am glad that you are not disturbed by how these laws might affect you one day, but unfortunately, I, and many of my fellow students here at the College, do not have such a luxury as to brush this issue off and forget about it. I won’t stand by idly or ignorantly. 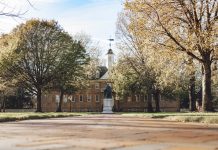