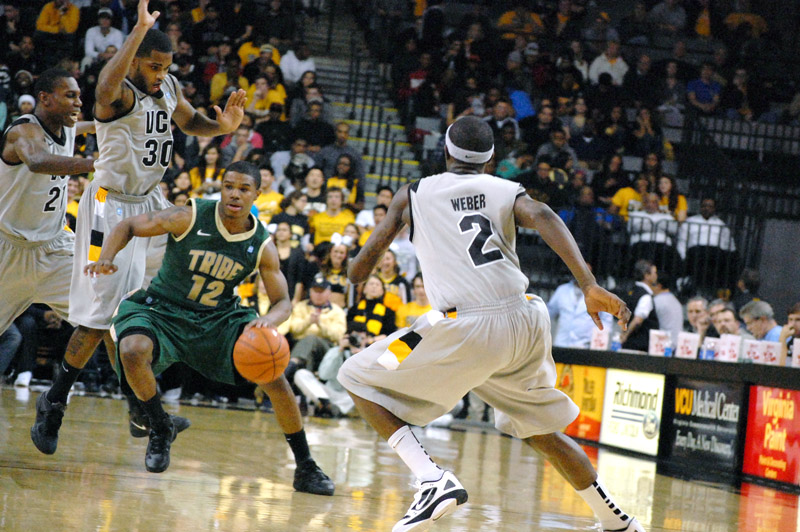 When James Madison visited Kaplan Arena back on Jan. 4, William and Mary was in desperate need of a slump-buster, having lost eight of its last nine and still in search of its first conference win of the season. The College responded, gutting out a 68-61 victory on the strength of a 10-1 run led by senior forward Quinn McDowell.

The scenario was similarly dire for the College the second time around when the two teams met in Harrisonburg, Va. The Tribe came in on a four-game losing streak, sitting near the bottom of the CAA with a 2-7 record in the conference. The outcome this time was as different as the venue as the College dropped its fifth straight, 59-47.

Sophomore guard Brandon Britt provided a bright spot for the College, breaking out of a scoring slump to lead the Tribe with 14 points. Only he and sophomore forward Tim Rusthoven finished in double-figures. See the full box score here.

The opening half was as evenly-matched as the first meeting between the two squads. The Tribe’s shooting woes continued as the team shot 30.4 percent from the floor over the first 20 minutes. Scoring was spread around from starters to the bench, as junior guard Matt Rum led the team at halftime with just five points. That would be all he could muster, though.

JMU led for most of the period but also struggled to knock down shots, knocking down just 36.7 percent of its field goal attempts.

The College’s four three-pointers kept it close, and the squad hit the locker room at halftime down 24-22 to the Dukes.

The difference was quickly erased with a layup from Rusthoven — who finished with 10 points and four rebounds — to open the second stanza. With just more than 18 minutes left, it was a whole new ballgame. Rusthoven’s layup was the start of a 6-0 Tribe run, but JMU guard Humpty Hitchens responded with a three-ball to cut the College’s lead to one with 14 minutes, 55 seconds to go.

The teams would trade leads until JMU’s Devon Moore hit a pair of free throws to give the Dukes a one-point advantage they wouldn’t relinquish. From there, JMU began to pull away, going on a 14-1 run resulting in a 47-35 lead with 5:23 to go.

McDowell — who finished with seven points and seven boards — hit a jumpshot with just under three minutes remaining, and Britt knocked down a free throw to cut the Dukes’ lead to five, but the College couldn’t sustain the momentum.

Freshman guard Marcus Thornton, already one of the Tribe’s go-to scorers, was nowhere to be found, finishing with just three points on 0 for 8 shooting from the field.

The Tribe lost the turnover contest 12-8 and the rebounding battle 40-30.

The College will return to action when it travels to Norfolk for a matchup with Old Dominion Saturday.