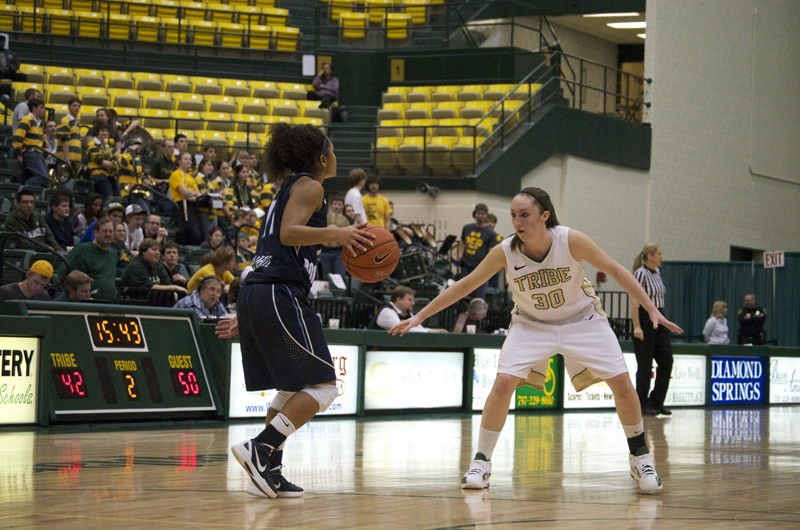 William and Mary’s defensive struggles continued Thursday as the Tribe dropped its second straight at the hands of Hofstra, 82-75, on the road.

Like so many teams before it, the Tribe struggled to find an answer for Hofstra’s six-foot forward Shante Evans, who came in averaging 17.8 points per game and 10.3 rebounds. Evans logged another double-double, scoring 19 points and pulling down 10 boards.

The Tribe got its own front-court production, as junior forward Emily Correal scored 14 points and grabbed 12 rebounds, while junior center Jaclyn McKenna led the College with 16 points of her own.

The Tribe suffered yet another slow start, falling behind 11-2 with 16 minutes, 38 seconds left in the first half. After a McKenna layup and a three-pointer from the College’s all-time leader in threes, junior guard Janine Aldridge, the College was back within four. A few minutes later, the Tribe broke through, grabbing an 18-17 advantage with a trey from senior guard Katherine DeHenzel at the 9:38 mark in the first. DeHenzel would finish the night with 12 points on 3 of 11 shooting.

The two teams would trade leads until the College ripped off a 6-0 run of its own to jump out to a 26-21 lead.

But neither team could really separate itself, and the Tribe took a 36-33 lead into the locker room.

The College nursed its small lead until, with 16:39 remaining in the contest, a Marie Malone jumper gave the Pride a 40-39 lead it wouldn’t relinquish. Hofstra would push its lead to four before Aldridge hit a jump shot of her own, once again making it a one-score game in the early goings of the second half.

But then the turnover bug bit, and two College turnovers helped an 11-4 Hofstra run. Suddenly, the Tribe’s halftime lead had disappeared and the Pride held a nine-point lead with 11 minutes to go.

After that, the Tribe never got closer than five points behind and the Pride stretched its lead to as much as 11 en route to outscoring the College 49-39 in the second period.

The Tribe actually outshot Hofstra, knocking down 45.3 percent of its field goal attempts while the Pride shot just 41.8 percent.

Now three games under .500, the College finds itself tied for 10th place in the conference and just one game up on last-placed Georgia State.

If anything, facing Hofstra serves as a reminder of the importance of seeding for the conference championship, which kicks off March 8. Last season, the Pride put an end to the 11th-seeded College’s season with an 89-67 drubbing the opening round of the single-elimination tournament.