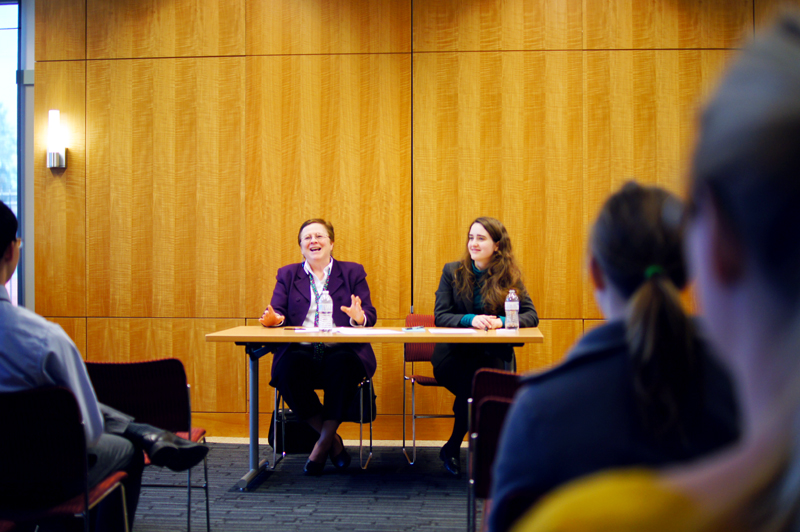 “One of the things about working in the government of the United States is it’s a lot like a university .… It’s kind of like, we do this over here, and this over here, and there’s the science and the chemistry and the biology,” Lyons said. “It’s very disaggregated. It’s concentrated in agencies that have very different missions, and that’s a good thing because they specialize; it’s a bad thing because they specialize. One of the real challenges is how you coordinate this, and how do you do the cross-cutting of things, and that’s a challenge in any system.”

Both Lyons and Pharr emphasized their unconventional career paths prior to working at the State Department. Lyons originally graduated with a bachelor’s degree in sociology before going on to earn a doctorate in ecology, after which she taught at medical and botany schools. It was only after living in Kenya, however, that her international view of science came into focus.

“A career isn’t a rigid path — you should be creative and daring because it is your path,” Lyons said. “It’s not too late to change, find out what you like and go for it.”

Pharr graduated from the College of William and Mary with a degree in chemistry and international relations and made the natural transition to graduate school. After earning her master’s in chemistry, however, she decided to take a break from laboratory duties to work abroad, first as an English teacher in Israel and then as an IT software instructor in places as diverse as Ghana, Zimbabwe, Egypt and Indonesia. She described her work as “science diplomacy.”

Pharr also emphasized how the U.S. government is distinguished from other nations’ governments in that multiple federal agencies need to hire science experts, rather than having one single agency purely devoted to scientific funding and research.

With the White House Office of Science and Technology Policy serving as a central hub for federal scientific policy, agencies such as the Environmental Protection Agency and NASA remain heavily based on the work of scientists, while other agencies as diverse as the Department of Defense and the Department of Commerce are also heavily reliant on the work of science experts.