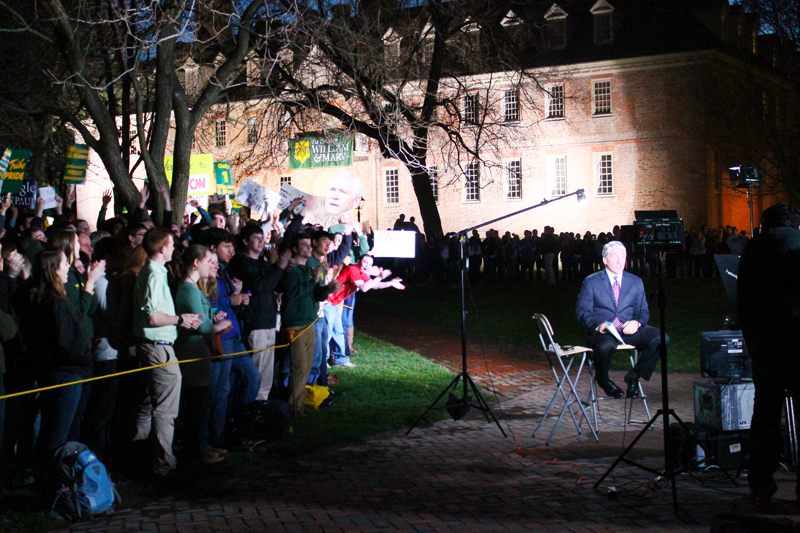 Airwaves across the country carried footage of the Sir Christopher Wren Building Thursday night as CNN news anchor John King broadcast live from the College of William and Mary.

“I’ve been on the campus before, and I’ve taken a little bit of a walk today. …but I know it from past visits; I’m eager to see even more of it,” King said. “It’s a nice, compact, beautiful campus, and it just speaks living history, and it’s just in one of the most extraordinary places in the country.”

King is the chief national correspondent for CNN and hosts his own show, John King, USA. He has broadcast from across the nation and around the world, accompanying presidents abroad and visiting disaster-stricken areas. Prior to working in broadcasting, he worked in print journalism, rising to the position of chief political correspondent for The Associated Press before being approached by CNN to become a White House correspondent. King has remained at CNN for the past 14 years.

“I get to ask a lot of questions, but the best part of my job is listening, whether it’s to a president or a candidate for president, a senator or a candidate for the senate…or either somebody who just found a job or just lost a job, or somebody who just lost a child after the tsunami,” King said. “You meet people, and you learn from them. You learn hopefully about some joy in their lives; you learn often about pain in their lives .… I call journalism the curiosity business, and I’m a curious person, so I get to ask questions; and my questions aren’t important, the answers are important. So I always tell myself … if I don’t learn something every day, I have failed, and the gift is meeting people and hearing their stories.”

King’s work has become more widely known in the last few months with the onset of the Republican presidential primaries and caucuses. King specializes in political news and has moderated several candidate debates, which has put him in the difficult position of questioning candidates on some of the more serious allegations their opponents have leveled against them.

“I have had some combative exchanges in past interviews, both in my print and broadcast service, never anything quite on that level,” King said, referring specifically to a well publicized exchange with former Speaker of the House Newt Gingrich at a South Carolina debate last month. “If you do what I do for a living, you have to understand … sometimes you’re going to get attacked. Some people watching will agree with you 100 percent, some will disagree with you 100 percent, and a lot will be somewhere in the middle, and that comes with the territory.”

The 6 p.m. broadcast attracted hundreds of spectators, including both students and city residents, as well as a number of activists. Supporters of Ron Paul were the most visible, and members of the Occupy Williamsburg movement were also on hand to make their messages known. Activists carried an array of signs, and a few even climbed the tree in front of the President’s House several times for greater coverage. Despite his packed schedule, King took the time after the broadcast to pose for pictures with many of the students who remained.

“It was very crowded. It was pretty surprising to see that many people there, actually …. We couldn’t really hear what he was saying throughout the entire broadcast, but the production crew tried to keep us under control,” Aditya Yellajosyula ’13 said. “I’ve always seen people in New York City for Good Morning America, and it was always cool to see those kinds of things, and it was a neat opportunity for me to be there and participate in that event.”

King made himself available for interviews to campus news organizations after finishing the taping of his interview with incoming Chancellor Robert Gates ’65, one of the key reasons for his visit to the campus. Gates, flanked by no fewer than a half-dozen security agents, was seen leaving the Wren Building following the interview and will be returning to campus Friday for the Charter Day Ceremony, during which he will be officially installed as the College’s next chancellor.