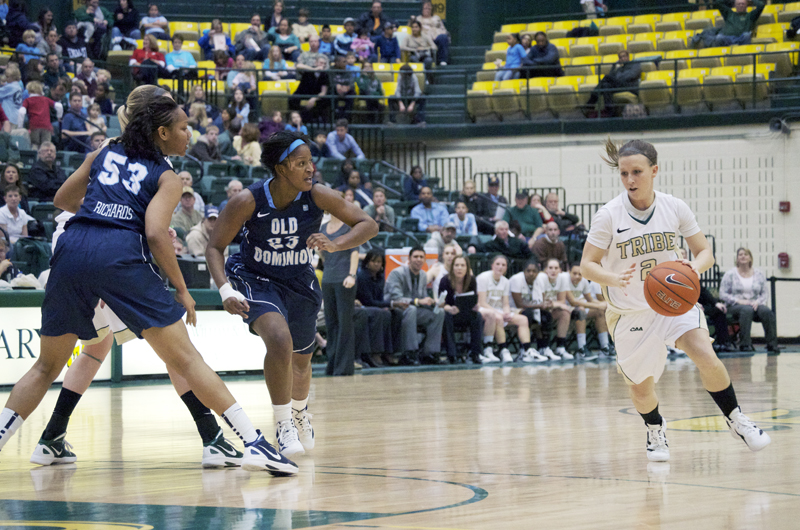 Although William and Mary has improved drastically from last year’s dismal three-win campaign, Sunday’s 80-77 loss to North Carolina-Wilmington highlighted another game in which the College came tantalizingly close but failed to secure the win.

The loss, which drops the Tribe to 2-9 in the conference and 9-13 overall, marked the fifth time this season that the College lost by three points or fewer.

While the College ultimately fell at the end, it managed to largely erase a seven point deficit late in the second half and threatened to take the lead.

The Seahawks grabbed a seven point lead with 1 minute, 31 seconds remaining in the half thanks to a jumper by forward Chelsea McGowen, but a series of clutch shots quickly propelled the Tribe within striking distance. Junior forward Janine Aldridge nailed a crucial three-pointer with 0:44 remaining, cutting the Seahawk lead to four.

Then, following a UNC-W turnover, junior center Jacyln McKenna drove into the lane, made the shot, and was fouled by McGowen. McKenna then swished the foul shot from the line, completing the three-point play, and cutting the once formidable Seahawk lead to just one with 0:38 showing on the clock.

UNC-W then took the ball up the court for what would prove to be a crucial stretch of play. UNC-W guard Alisha Andrews launched an ill-fated three-pointer, but then, as the ball clanged off the backboard, grabbed her own rebound and, shortly thereafter, senior guard Katherine DeHenzel fouled Andrews, sending the UNC-W sophomore to the line.

Andrews converted both of her free-throw attempts, giving the Seahawks a three-point cushion with 0:19 left in the contest. Aldridge missed from three, and following a UNC-W miss on the other end, DeHenzel missed a desperation three as the clock expired.

The contest, a wild one which featured 14 lead changes and eight ties, included another good offensive performance for the Tribe, as four players finished with double figures.

Junior forward Emily Correal led the Tribe on the offensive side of the ball, recording 22 points on a 10 of 22 shooting performance. McKenna added 14 points, and together, the junior duo was largely responsible for the Tribe’s impressive 40 points in the paint.

In addition to Correal and McKenna, Aldridge notched 19 points on an impressive 5 of 9 performance from behind the arc. Senior guard Taysha Pye also added 13 points in 25 minutes of action, while DeHenzel dished out five assists.

UNC-W also dominated the boards, winning the turnover battle by a 48-36 margin. The Seahawks benefited from the ball-hawking skills of forward Ayoola Weaver, who alone accounted for 16 UNC-W rebounds.

The Seahawks also had four players in double figures and were led by guard Tawanna Lee’s 21 points. Weaver added 11, McGowen added 12, and guard Abria Trice scored 15 for the Seahawks. The loss marks the sixth straight time the College has lost when surrendering 80 or more points.

Following three straight road losses, the College returns to Kaplan Arena Thursday in search of a much needed conference victory over visiting Towson.