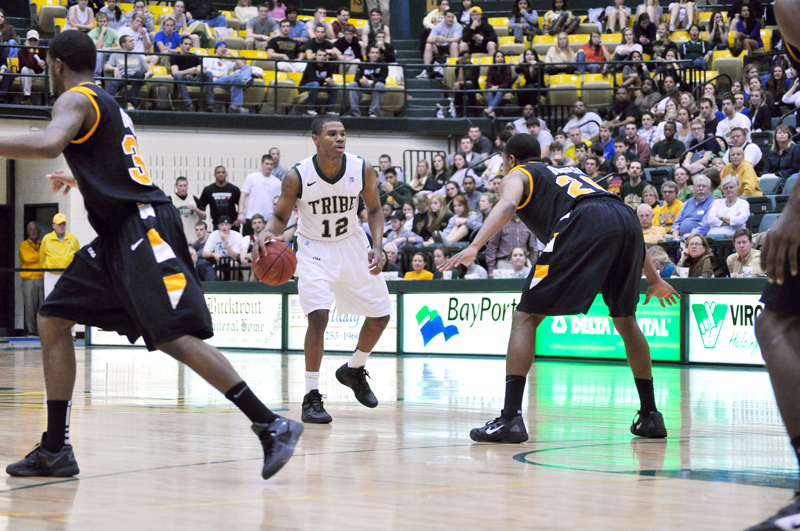 A season-best scoring effort from senior forward Quinn McDowell wasn’t enough to stave off William and Mary’s eighth consecutive loss as the team fell on the road to UNC-Wilmington, 81-68.

“We just got outplayed,” head coach Tony Shaver said. “Shooting was part of it. They shot it really well and we didn’t.”

Aside from the shooting numbers, the College actually played UNC-W fairly close, outscoring the Seahawks in the paint, off turnovers and on second chances. But bench production was another area in which UNC-W got the best of the Tribe.

Guards Tanner Milson and Trevor Deloach — the sixth and seventh men for the Seahawks, respectively — combined for 29 points on 9 of 18 shooting as the UNC-W bench outscored its Tribe counterpart, 34-2.

The College actually led for the majority of the game’s opening minutes, holding a 10-6 lead with 15 minutes, 20 seconds to go in the first after a dunk from freshman guard Marcus Thornton, who scored eight points on 2 of 10 shooting and pulled down three rebounds. But immediately after that, things unraveled for the Tribe.

Thornton was given a technical foul for taunting the crowd, and the Seahawks launched into a 26-5 run over the middle part of the half. The Tribe’s hold on the game was quickly lost and the Seahawks eventually went into halftime with a 34-25 lead.

UNC-W forward Keith Rendleman — who finished with 12 points and as many rebounds — opened the second half with a layup and the Tribe never got back within single-digits.

“Rendleman’s a tough kid,” Shaver said. “You try to double-down on him and it leaves a lot of good shooters open.”

The numbers backed Shaver up, as UNC-W knocked down 10 of 19 three point attempts. The Tribe went just 6 of 23 from beyond the arc.

The Seahawks would grow the lead to as much as 17 with 11:22 to go on a three-ball from guard Adam Smith, who led UNC-W with 25 points on 6 of 13 shooting. He also grabbed six rebounds on the night as the Tribe was outrebounded 40-26 overall.

“We really just got outplayed,” Shaver said. “We can’t afford to give up 81 points and be successful.”

The eight-game slide for the Tribe is its longest of the year and has resulted in the Tribe occupying 11th place in the 12-team conference, just one game above 12th-place Towson.

The College will return to action when it takes on Old Dominion at home Wednesday.